Measuring the irradiance due to solar radiation with a pyranometer

I carried out an experiment where a pyranometer (on a flat surface) was used to measure the irradiance at the ground due to solar radiation over a range of solar zenith angles (SZA).

[To be clear, the definition of irradiance is: "the radiant flux (power) received by a surface per unit area. The SI unit of irradiance is the watt per square metre (W/m^2)" (from Wikipedia)]

This is a form of the Beer-Lambert-Bouguer law, then transmissivity is inversely proportional to the exponential of the optical depth, and also equal to the ratio of the irradiance at the start of the path to the irradiance at the end of the path, and I am satisfied this is correct. The diagram below (that I have made) illustrates this law (ignore the lowercase $z$).

The lab script (perhaps rather sloppily) uses the word "intensity" instead of irradiance, but the demonstrators did agree that we're measuring in watts per square metre.

This has been marked as wrong; apparently I should've used $I_{\lambda 0} = I_{SC}$, but this seems obviously wrong to me.

Response 1 (from marker A) 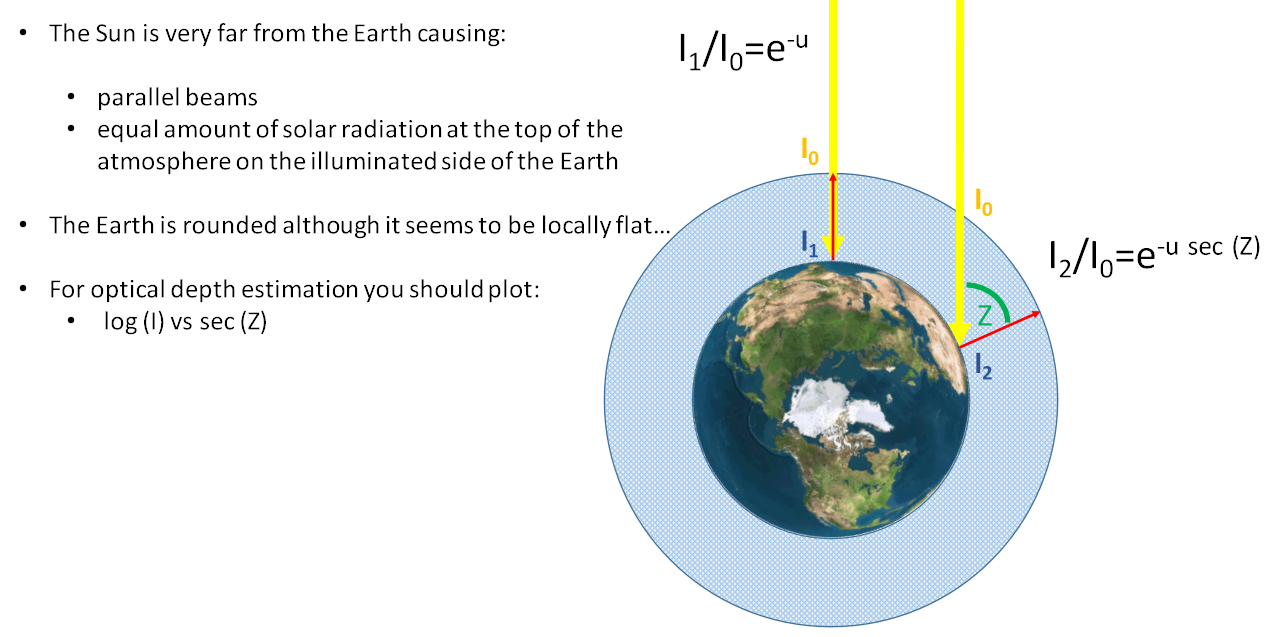 But the problem I see with this is that for $I_2$, it seems to assume the pyranometer is facing directly towards the sun, which is incorrect, as the pyranometer was facing vertically upwards (normal to the surface of the planet) in the experiment.

Also the diagram is way out of proportion.

If $I_{\lambda 0} = I_{SC} = const$, as the marker claims, then the expression above would be false, because $I_\lambda$ (the irradiance measured at the ground by the pyranometer) varies with the cosine of the SZA.

Therefore, we need to divide the left hand side by $\cos(Z)$ for that expression to be correct/constant.

Response 2 (from marker B)

The pyranometer has a $2\pi$ field of view due to its hemispherical glass dome.

Consider a parallel beam incident on a normal surface, with intensity $F_0$. When the beam is not normal to the surface, the intensity perpendicular to the surface is now reduced and is $F_0 \cos(Z)$. The cosine corrected response of the pyranometer means that the output of the pyranometer is $F_0$ for the case of normal incidence and for the case where the angle is $Z$.

As the pyranometer manual states, this correction is valid up until $Z$ = 80 deg. You have misinterpreted what the manual refers to as a ‘cosine corrected response’.

This manual states, "Ideally a pyranometer has a directional response which is exactly the same as the cosine-law," which seems to be in direct contradiction with what he is saying.

As for the dome, the explanation of its purpose given in the manual is, “The rise of temperature in the thermopile is easily aﬀected by wind, rain and thermal radiation losses to the environment (for example, a 'cold' sky) and the delicate black coating must be protected. Therefore the detector is shielded by a dome. This dome allows equal transmittance of the direct solar radiation component for every position of the sun in the hemisphere above the detector.”

To me, this indicates that the hemispherical shape is such that the direct beam from the sun is always normal to the dome surface, so no refraction occurs and the transmitted beam carries on straight to the thermopile. But the angle the beam makes with the thermopile still determines the irradiance.

This is the pyranometer used, Kipp & Zonen CMP3 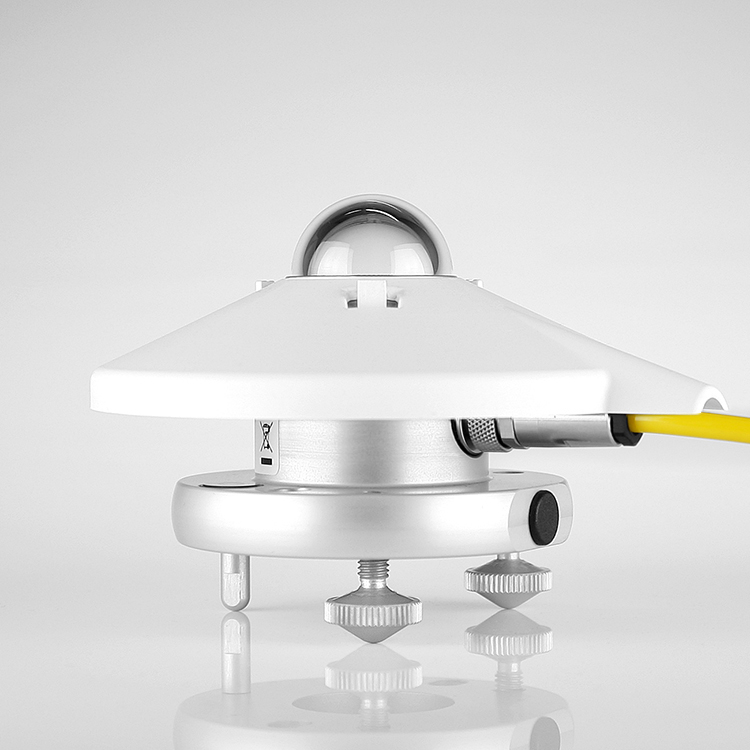 Unfortunately, the markers are either telling me to take it up with each other or no longer responding to my latest emails, hence I have taken it here.

$I_{\lambda_0}$ is the intensity of light at the top of the atmosphere - this is the solar constant.

It is then modified by the absorption in the atmosphere to give you $I_{\lambda}$ (which ignores scattering).

A few things seem incorrect about this setup:

3
What is meant by the "cosine corrected response" of a pyranometer?

3
What is meant by the "cosine corrected response" of a pyranometer?
1
Why do Lambertian Reflectors Privilege the Observer?
0
Rayleigh Scattering, Atmosphere-Dependant
4
Why does this simple equation predict the Venus surface temperature so accurately?