Difference between turbulant and unstable flow?

In (1) I have read that their are two 'critical' Reynold's numbers. Above one we get unstable flow and above the other we get turbulent flow.

Since I don't think a proper formal definition of turbulent flow exists (correct me if I am wrong), I was wondering what the difference between a turbulent flow and an unstable flow is?

Unstable flow refers to the whole region between laminar and turbulent flow.

Your link does expand on what this means, in the same paragraph :

However, what happens in pipe flow makes it clear that the Reynolds' number at which the flow becomes turbulent is generally different from the Reynolds' number at which the flow becomes unstable for the first time. Both numbers are often called the critical Reynolds number, but the difference between them is important, because the instability of a flow relative to small disturbances does not necessarily and directly imply a transition to turbulent flow. In general a new, more complicated but still laminar flow evolves which...becomes unstable and possibly develops into a new laminar flow, but could also make the transition to turbulence.

The above description is typical of chaotic systems, in which a transition region exists between predictable (eg periodic) and unpredictable (chaotic) behaviour. This is illustrated in the following typical bifurcation map. The region up to $r=3.0$ represents stable predictable flows. At $r=3.0$ flow can switch unstably between 2 different patterns. Another instability arises at $r=3.45$. Then again at $r=3.55$ and so on. During the transition region from $r=3.0$ to $r=3.65$ the pattern of flow gets more and more complex in discrete steps which become more and more frequent as the relevant parameter (here Reynolds number) is increased. 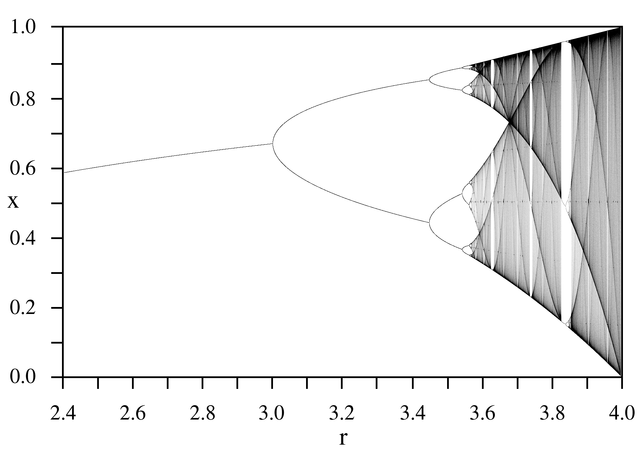 At the start of the chapter Unstable Flows and Laminar-Turbulent Transition in the text Fluid Mechanics : An Introduction to the Theory of Fluid Flows, Franz Durst outlines the need to sub-divide the traditions distinction between laminar and turbulent flow into 4 sub-categories. He makes the same distinction between stable laminar flows and those which are unstable to small disturbances but maintain a measure of regularity in the disturbed state, for example by switching to a different pattern of laminar flow.

Not the answer you're looking for? Browse other questions tagged fluid-dynamics definition or ask your own question.