Is there any version of Bell's inequality when $d >2$?

So, I was studying Quantum Information Theory, and I came up with Bell's inequality.

My notes then point out that there is no version of the Bell's inequality when we are in $d > 2$.

Is that still true? Is there any reference for this, or some new theories/attempt about?

There are Bell inequalities for basically all scenarios you can think of.

This implies that we have two main parameters we can play with:

Note that the number of outcomes per observable is at most the number of local dimensions of the state so that's not a new parameter. If I understand you correctly, you are most interested in the second parameter, however since the numbers cannot really be considered completely separatly, I'll discuss all three of them.

Okay, but what has been done? A lot! A short overview about what can be done for different setups can be found on the Hannover QIT page: Beware, it seems to only go up to 2010 (and a lot has happened since then). Let's get more specific:

What about Bell inequalities for many measurement settings? One of the early references considering this question is a paper by Bacon and Toner, which gives a complete classification for bipartite systems and three dichotomic (i.e. two-outcome) measurement settings.

What about Bell inequalities for more than two observers? Also here, tripartite Bell inequalities have been known for a long time. There is a much more interesting aspect I want to highlight here: You can also ask about the amount of violation of a Bell inequality by quantum mechanics. In other words: What is the ratio between the largest amount of correlations in quantum theory and the largest amount of correlations for local hidden variable models? In the famous CHSH inequality, that ratio is $\sqrt{2}$ and for arbitrary bipartite systems, it is finite (regardless of the number of measurement settings or the number of outcomes per measurement. The ratio is always upper bounded by some finite Grothendieck constants). However, for tripartite systems, it can already be infinite as shown in the seminal work by Perez-Garcia et al.

Martin's answer is very comprehensive, but here's a specific example of a game for $d=4$: the Mermin-Peres Magic Square Game.

Classical strategies win it at most 8/9'ths of the time in expectation, but entangled strategies can win with certainty.

Basically, the game amounts to two players each placing an even number of tokens on a 3x3 board. One has to play vertically on a column chosen at random by a referee, while the other plays horizontally on a row chosen similarly. The goal is for the cell at the intersection of the chosen column and row to end up with exactly one token: 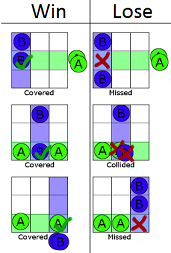 During the game each player doesn't know which row (col) the other player was told, obviously.

Not the answer you're looking for? Browse other questions tagged quantum-information bells-inequality or ask your own question.

3
What makes Bell's original inequality unsuitable for experiments?
8
Entanglement, Bohr-Einstein Debate, Bell's Inequality
49
Has Jaynes's argument against Bell's theorem been debunked?
0
How can Bell's inequalities be used to rule out hidden variable theories when they do not take quantum effects into account?
1
Can Bell-CHSH inequality be used to prove quantumness of an physical effect?
1
Are there meaningful theories with both locality and “counterfactual definiteness” that are ruled out by Bell's Inequality?