Does the Alcubierre drive have a theoretical upper speed limit?

Every now and then, it's claimed that the Alcubierre drive has an upper speed limit. While superluminal, this is often brought up as an argument why such a drive, even if it were to turn out to be viable and possible to construct, would still provide only limited usefulness for interstellar travel.

If the Alcubierre drive turns out to actually enable macroscopic travel at apparent superluminal velocities, then is there anything about it, as currently hypothesized, that would put a theoretical upper limit on the attainable velocity (lower limit on travel time between two arbitrary points in real space), similar to how Special Relativity imposes an upper speed limit equivalent to the speed of light?

The closest I have been able to find is Wikipedia's discussion on how, at $10c$, a wall thickness of less than $10^{-32}$ meters (versus the Planck length $1.6 \times 10^{-35}$ meters) would be required, but it is not clear to me whether or not this would impose an upper speed limit for the Alcubierre drive as there are no comparable calculations quoted for other velocities.

Note: I'm not asking about violations of causality introduced by the general concept of faster-than-light travel, but specifically about this one aspect of the Alcubierre drive. If doing so makes this question easier to answer in an understandable fashion, then let's posit simply an ideal universe with a single observer aboard the spacecraft and no message-passing back and forth.

There is currently no theoretical upper limit to the Alcubierre drive. That being said, let's delve a bit deeper into it.

The Alcubierre drive, at its core, is just a deformation added on flat spacetime as a bump function (it is everywhere flat except for a compact region of spacetime). This deformation moves around, and there are no upper speeds dictated by general relativity.

$v$ the speed of the warp bubble, $R$ the size of the warp bubble and $\sigma$ the inverse of the wall's width. There are ways to bring down those energies slightly, but basically that's the kind of energy scale we're dealing with. Even with extremely low speeds and tiny bubbles, the energy requirements are still pretty large.

It's pretty hard to find exact limitations for the speed, since that would involve proving a fair many theorems, but it's likely that we can't have the energy too negative. There are no precise generic theorems but various energy conditions and quantum inequalities points to the fact that there will be a bound on negative energy, and from what we can produce currently (via squeezed vacuum states, Casimir effects and such) and current theorems, it is likely to be rather small.

Those are the things to consider for the speed limitations of the Alcubierre metric. No clear answer, but even a particle-sized warp drive going at a slow pace of 1m/s is already gonna be pretty intense, energy-wise.

The not-playing-along answer is that, since the Alcubierre drive requires an unphysical negative energy density to do anything interesting, its speed limit is $c$.

Let's be charitable and play along. Suppose you have an Alcubierre drive which successfully lets you travel at your speed limit, $v_\text{max} = 10c$, in some reference frame. Here's a spacetime diagram of your trip from my perspective. You're traveling on the green worldline from the past to the future. You turn the drive on at $A$, and off at $B$: 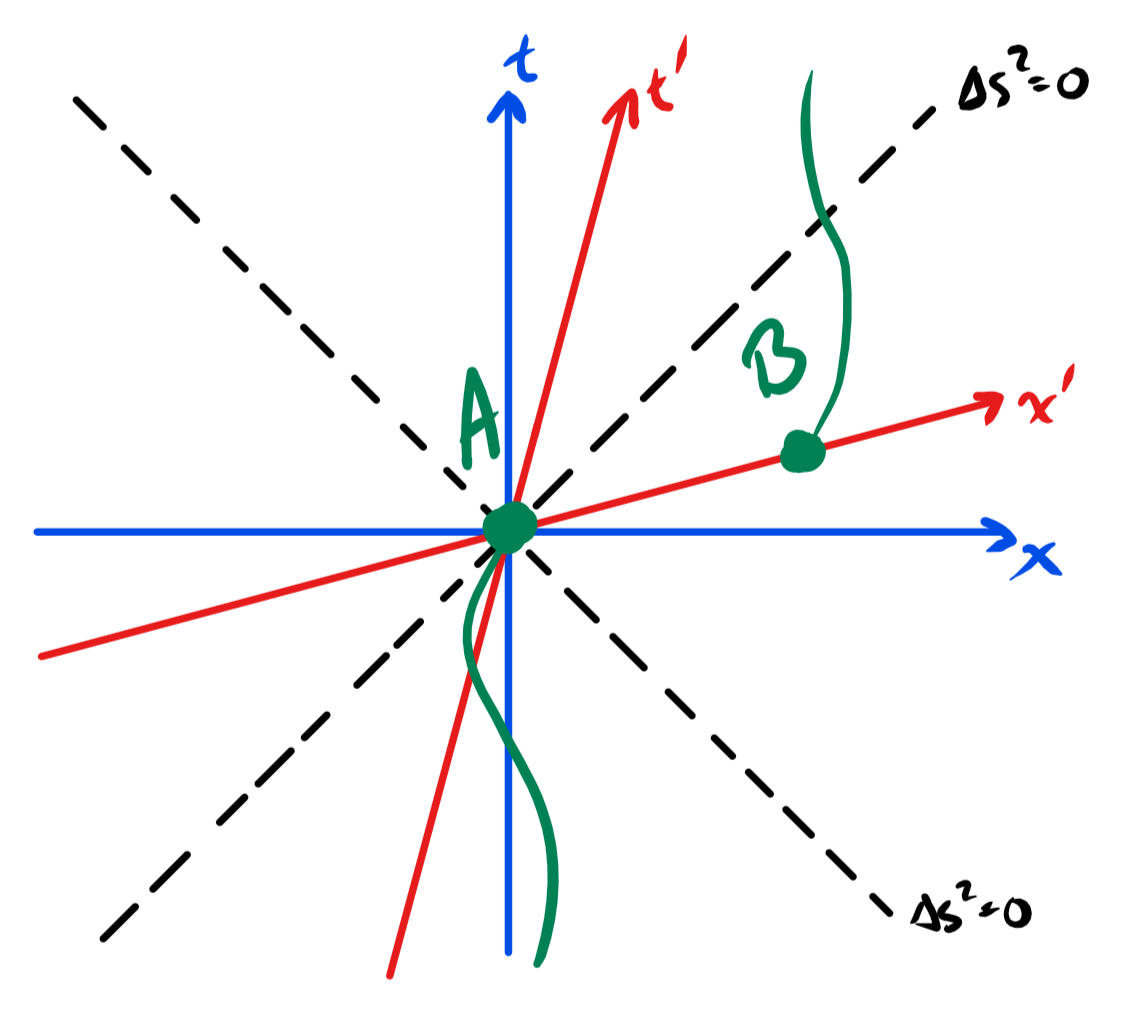 I measure that your speed between those two events, in $c=1$ units, is $$v = \Delta x/ \Delta t = v_\text{max},$$ while the coordinate-invariant interval between the two events is $$ \Delta s^2 = \Delta t^2 - \Delta x^2 = \Delta t^2 \times (1-v^2). $$ Along comes John Rennie from the left, traveling with the perfectly reasonable speed of $1/v_\text{max}$. John and I agree about spacetime intervals between events, but we disagree about time intervals and space intervals. In particular, John sees that the start and end of your trip, $A$ and $B$, are both on his $x'$ axis: those events happened simultaneously at different locations, so he sees your speed as infinite. (We'll ignore the other observers overtaking John from the left who see you exiting your Alcubierre craft, $B$, before you turned it on, $A$.)

This is kind of an interesting result. Suppose, as the Wikipedia article you link to does, that speed limit is somehow related to some measurable property of spacetime, like the Planck length. Since John and I disagree on what your actual speed is, we must also disagree on the parameter that explains it, based only on our perspective based on how we happen to be moving when we observe you. Any such parameter violates Lorentz symmetry; constraints on Lorentz symmetry breaking are quite tight.

Not the answer you're looking for? Browse other questions tagged faster-than-light warp-drives or ask your own question.