By using a blender to prepare my breakfast shake (containing ice and nuts amongst others, see ingredients below), I made the following observations.

Case 1: Using large ice cubes will result in a smooth shake with properly crushed nuts, except for one quite large ice cube remaining in an ellipsoid shape.

Case 2: However, using smaller ice cubes results in all ice being crushed, but there will remain larger chunks of partially crushed nuts. Often, a few hazelnuts seem quite unharmed.

In both cases, the effect of running the blender in a different mode (pulses, lower speed) or blending longer does not really make a difference.

I am not a physicist, but my intuition tells me that the largest objects in the mix cause most turbulence, which forces the smaller objects into the blades of the blender in a probabilistic sense. Meanwhile, the force of the vortex is not large enough to help crushing a large / the largest ice cube. If there are only small ice cubes, there is not enough turbulence to crush the nuts before all ice is crushed, i.e. the probability of the nuts hitting the blades is so low, that it would take comparatively long to crush them.

Is that intuitive generalization consistent with fluid dynamics?

Or is a general explanation prohibited by the physical complexity of blending process, i.e. I am just encountering an odd combination of blender geometry, ingredient properties (geometry, density, temperature) and ingredient ratios and it would be impractical/impossible to create a model to support my theory.

The regularly used ice cubes have a basic cylindrical shape with a diameter of $3\,\mathrm{cm}$ and varying height. The "large" ones are $5\,\mathrm{cm}$ to $6\,\mathrm{cm}$ tall. So let's say that large ice cubes are identified by having $V > 35\,\mathrm{cm^3}$. But the bag contains also many smaller ones and fragments of cylinders.

In comparison, the space invaders are approximate cuboids of equal size with $V \approx 6\,\mathrm{cm^3}$.

As I am writing this, I realize that the amount of ice varies dramatically due to my optical misestimation of the ice volumne (I rarely used the scale when adding the ice). To replace 4 large cubes, over 20 invaders are needed. When I used them, I barely added 10.

I am not a physicist, but my intuition tells me that the largest objects in the mix cause most turbulence, which forces the smaller objects into the blades of the blender in a probabilistic sense. Meanwhile, the force of the vortex is not large enough to help crushing a large / the largest ice cube. If there are only small ice cubes, there is not enough turbulence to crush the nuts before all ice is crushed, i.e. the probability of the nuts hitting the blades is so low, that it would take comparatively long to crush them.

The vortex does have enough force to crush the larger objects but they need to get pushed into the blades. It's not about probability. 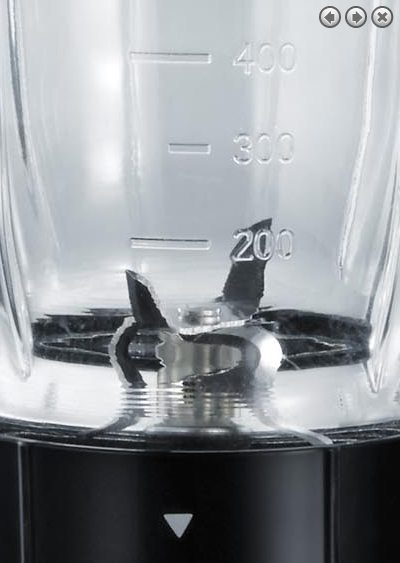 That's a closeup of your blender and as you can see the blades go out and curve up. They don't reach the outside of the circle. Therefore only things pushed onto the blades by other objects can be fully blended.

Your blender's blades are designed mostly for liquids, the blades curve upwards and when hit by a liquid will push it up and suck more in from the bottom of the blender. When you have harder objects they must be pushed into the blades.

For Example, If you have lots of walnuts in your blender and you turn it on only a few lying directly on top of the blade will be "blended". The rest will be pushed away from the blades by the spinning motion and go where the blades cannot reach them.

The biggest objects will not be properly blended because they will be pushed to the side and stay there. You said you ended up with one big ice cube if you used large ice cubs to chop the nuts properly. What's probably happening is the nuts and small ice cubes are pushed into the blades by larger ice cubes and eventually only one large ice cube is left. The last one is probably the largest ice cube.

If you want to get rid of that big ice cube then you'll need a different blade for you're blending or you can fish it out of the bottom and smash it with a hammer a bunch.

These diagrams should clear up confusions: 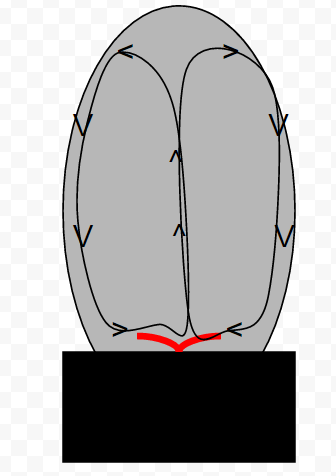 This is your blender, the red arms at the bottom are the blades and the swirly pattern is the way liquids are moved by you're blades. 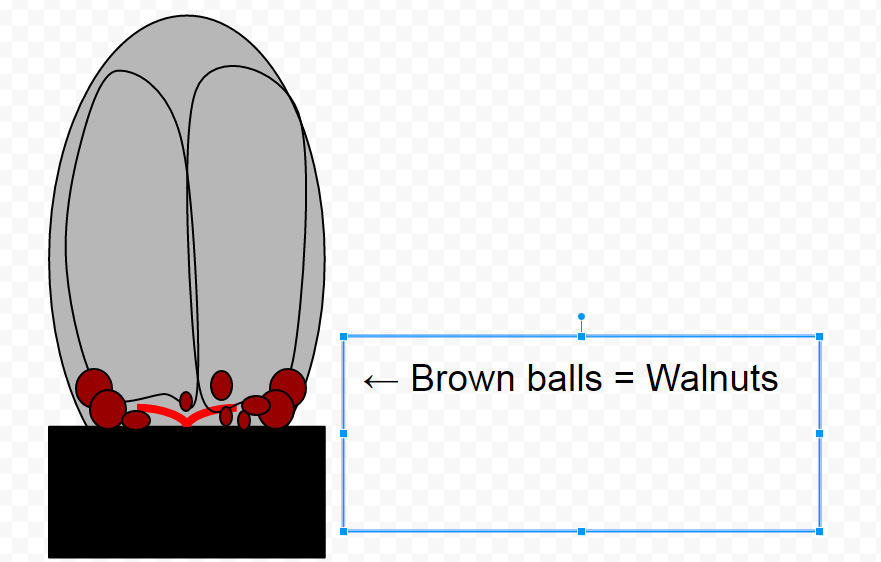 As you can see in this photo the smaller walnuts (and some large ones) are being pushed into the blades by larger walnuts on the sides. 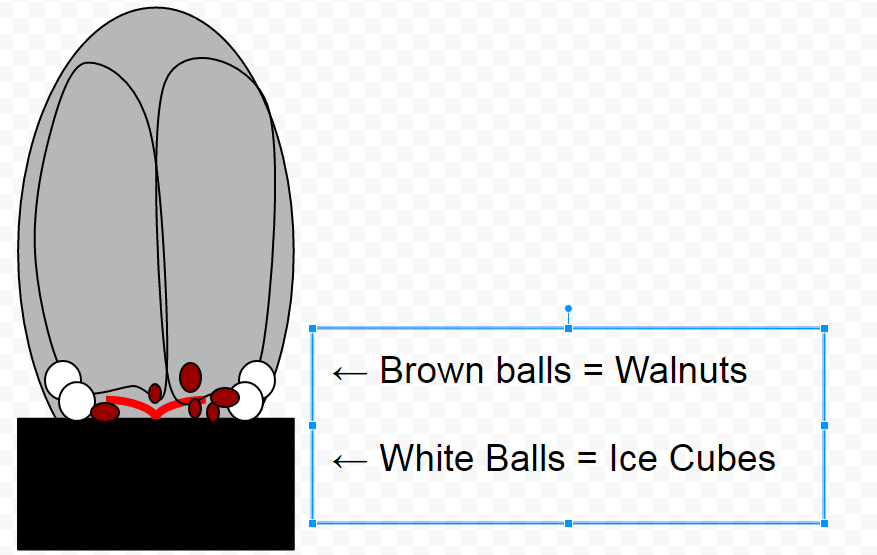 In this photo you can see that the ice cubes are pushing the smaller walnuts into the blenders. The largest objects are always being pushed to the side by the outwards force of the rotating blades.

If you want to blend ice then you need some pretty gnarly blades.

Amazon link here You can check that out and maybe find some ice crushing blades for your blender. 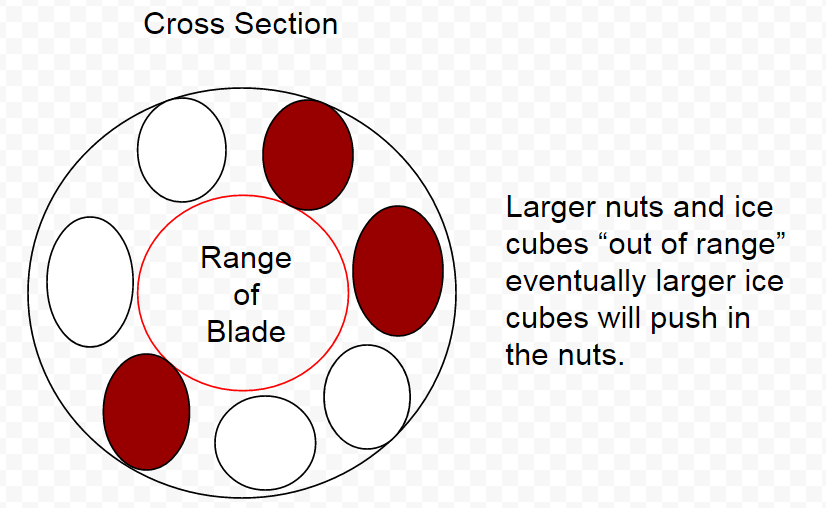 Not the answer you're looking for? Browse other questions tagged fluid-dynamics everyday-life turbulence or ask your own question.