The key parameter which determines the abundances of light elements is the baryon/photon ratio. Is this ratio derived from first principles -if so, how- or, if it results from a small favoritism for matter over antimatter in the early universe, then from what observations is the baryon/photon ratio calculated -and how? Though the early universe is assumed to be dominated by radiation, how do we know this? Is it because we need this radiation to explain its evolution, i.e., the observed abundances? As far as I’m aware of, this radiation cannot be observed as the universe at that time was opaque.

The ratio of baryons to photons or the baryon abundance is defined as:

Its value is obtained in direct measurements of the abundances of the light elements $^4$He, $^3$He, $^2$H or D, $^7$Li, and indirectly from CMBR observations and galaxy cluster observations. Source: https://ned.ipac.caltech.edu/level5/Sept02/Roos/Roos4.html .

The strongest constraint on the baryonic density comes from the primordial deuterium abundance. Deuterium is observed as a Lyman-$\alpha$ feature in the absorption spectra of high-redshift quasars. The Planck 2018 results give: $\Omega{_b}h^2 = 0.0224 \pm 0.0001 \, (1 \sigma \; $CL$)$ but equation 7 of: "Improved BBN Constraints on the Variation of the Gravitational Constant" (Oct 23 2019), by James Alvey, Nashwan Sabti, Miguel Escudero, and Malcolm Fairbairn offers on page 3:

"We are also interested in including a conservative determination of the baryon density to lift the degeneracy between $\Omega{_b}h^2$ and $G$. Using directly the posterior values from the baseline ΛCDM Planck 2018 analysis will not be satisfactory, because $G$ is kept constant there. Instead, we use the results of Y. Bai, J. Salvado and B. A. Stefanek, "Cosmological Constraints on the Gravitational Interactions of Matter and Dark Matter, JCAP 1510 (2015) 029 [1505.04789], who carry out a Planck likelihood analysis including variations in $G_{CMB}$. In Table I of [Bai et. al.] they find that the mean baryon density exactly matches that of the base Planck 2018 TTTEEE+lowE analysis within ΛCDM, albeit with twice as large error bars: 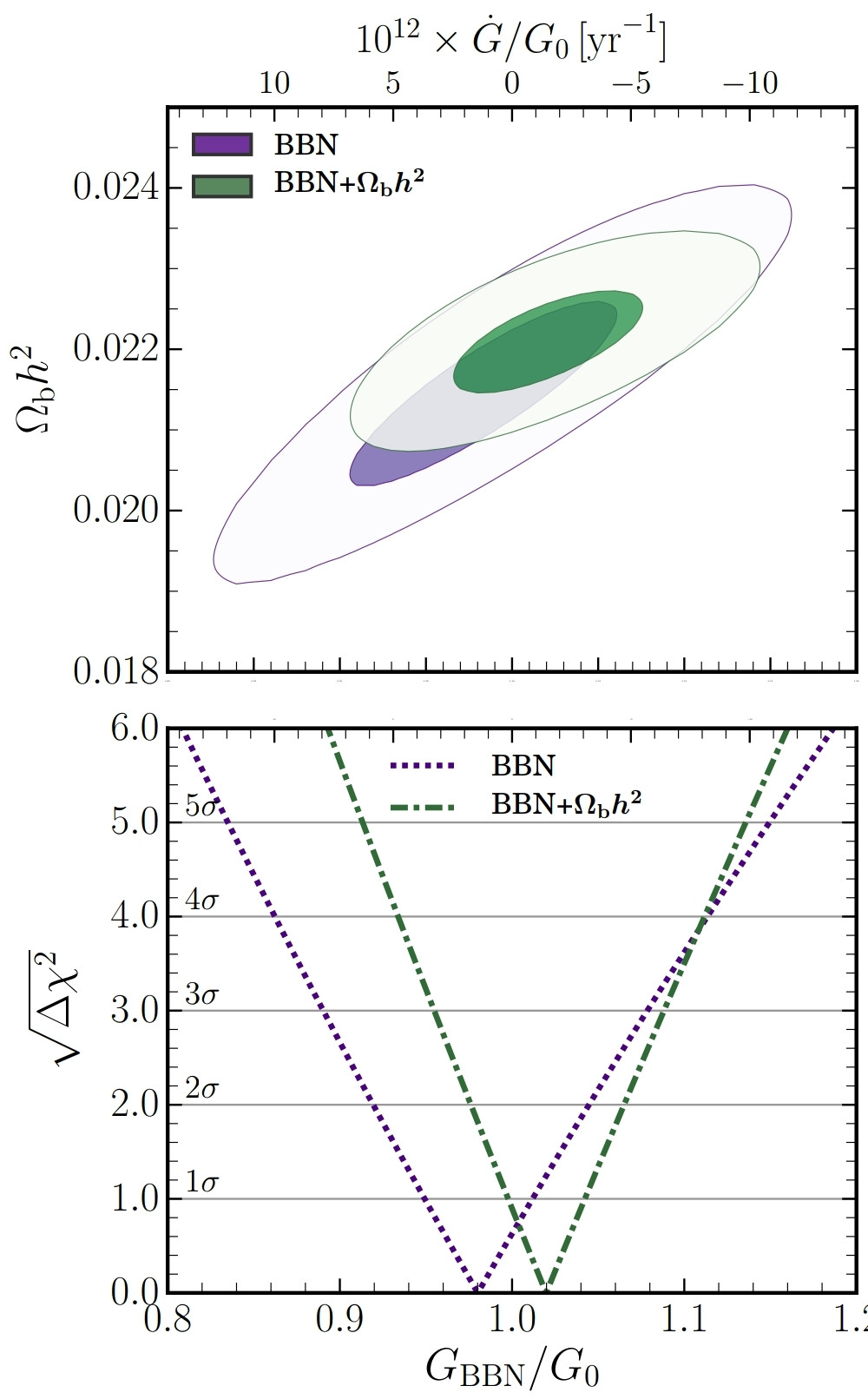 Some systematic uncertainties remain in the calculations arising from the reaction cross sections.

"Though the early universe is assumed to be dominated by radiation, how do we know this? Is it because we need this radiation to explain its evolution, i.e., the observed abundances? As far as I’m aware of, this radiation cannot be observed as the universe at that time was opaque."

Before the dark ages of the universe, the cosmos was so hot that all the atoms that existed were split into positively charged nuclei and negatively charged electrons. These electrically charged ions blocked all light from traveling freely.

Approximately 400,000 years after the Big Bang, the universe cooled down enough for these ions to recombine into atoms, enabling the first light in the cosmos, that from the Big Bang, to finally shine. However, what came next were the dark ages of the universe — there was no other light, as the stars were not born yet.

Current models of the universe suggest the first galaxies began forming about 100 million years after the Big Bang, marking the beginning of the end of the dark ages. This process of star and galaxy formation gradually continued until virtually all the hydrogen and helium that make up most of the universe was once again ionized, this time by starlight, about 500 million years after the Big Bang.

Even cold hydrogen gives off light in the form of radio waves with a specific wavelength of 21 centimeters. Source: https://www.space.com/13368-universe-dark-ages-survival-cosmos-evolution.html .

The baryon to photon ratio is estimated and measured. Not from first principles. The photon density is calculated in various ways, but one way is from the CMB temperature of 2.73K. The baryon to photon ratio is estimated in a more complex way, and is related to the ratio of baryon density to the critical density (for a flat universe), and the Hubble constant. It's also independently only partially measured/estimated from the observation of the numbers and average sizes of galaxies and stars, and the density of interstellar matter, and some other baryon if matter.

The number density of photons is very well estimated, at about 413 photons per $cm^3$. The baryon density is best from the CMB matching, but the observed confirmed matter density is mostly from interstallar mass, and then the stars and galaxies, and it accounts for maybe 3/4 of it.

The estimated photon to baryon ratio $\eta$ is on the order of 1 billion.

The He and other baryons produced in Big Bang nucleosynthesis (BBN) is also covered in that reference, and others. The abundance of $^4H_e$ is not too sensitive to $\eta$ but the other light elements up to $L_i$ are. The articles describes other estimates for the baryon density from the CMB.

The primordial prevalence of baryons over their antiparticles remains research area. It is known that the weak force has a CP asymmetry that could contribute to a larger number of particles over antiparticles. To match the otherwise expected equality, roughly, of baryons and photons, it would have to account for the roughly 1 billion to 1 preference for particles over antiparticles. It does not seem easy to attribute some CP asymmetry to the strong force, and ways to account for the 1 billion number have not been able to get to it. But for BBN the roughly 1 billion number Please get current best estimate online) seems to be getting firmer, the issue remains for the particle standard model , or beyond it, to account for the observed particle-antiparticle asymmetry.

Not the answer you're looking for? Browse other questions tagged cosmology photons baryons or ask your own question.

53
Why is hydrogen the most abundant element in the Universe?

10
Baryon asymmetry
15
Why can we see the cosmic microwave background (CMB)?
13
Baryogenesis only at the Planck scale, or none at all?
6
Do photons make the universe expand?
2
Where did all the photon energy go?
1
How the dark matter density parameter appears in Big Bang Nucleosynthesis (BBN)?