A very layman question as in title. Like every wave having a negative side, can a gravitational wave have anti-gravity.

To put it in different words, a gravitational wave passing through a complete vacuum, if in positive cycle, can create a denser space-time, in it's negative cycle, create a rarer space-time?

Gravitational waves, though transverse, can be thought of as similar to sound waves:

A sound wave, as it moves through a medium the sound wave creates alternating volumes of greater and lesser particle density.

Gravitational waves do something similar, except the medium is spacetime itself. The result is that as a gravitational wave passes through a region of space, at one crest the spacetime is "stretched" in one direction and contracted in the perpendicular direction, like when you stretch a rubber band and it gets narrower. At the trough of the wave, the same thing happens, except the direction that was contracted is now stretched and the direction that was stretch is now contracted. This is why the good ol' perpendicular lasers and mirrors trick worked for detecting them.

As for the gravitational waves, they have indeed been detected (by LIGO/Virgo), but their associated quantum that would mediate gravity, a 2-spin boson called the "graviton", is still hypothetical and AWOL for a century. Not all fields have a mediate elementary particle. Gravitational waves could just be "ripples in spacetime", like 2D ripples on the water surface of a pond. Einstein's coupling constant 8πG/c⁴ in his field equations tells us how is such "coupling" i.e. the direct relation between how much spacetime is distorted (the Gμν tensor, LHS) with respect to the amount of local matter-energy (Tμν tensor, RHS). It shows the stiffness of spacetime and how it is extremely rigid: indeed, the coupling constant has the light speed raised to the fourth power at the denominator, making it extremely small.

So any gravitational waves are very tiny, even with a lot of energy focused locally, so any gravitational waves that would be artificially produced in the future are expected to be very weak. It is no coincidence that such waves have been detected thanks to the gigantic energy released by the merging of two black holes, yet the signal was almost lost in the noise and its detection required a particularly elaborate algorithm. 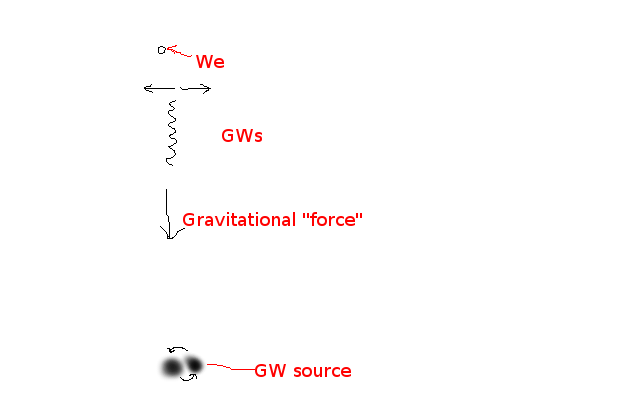 I will re-form your question by ignoring the second and third sentence, which are not too clear.

Its the same as for light: if light - which carries momentum - is absorbed by an object then that object moves away from the light source.

To Maximize the Effect:

If gravitational waves impinge on any rotating object there can be repulsion or attraction. The effect is only really strong when waves impinge on a rapidly rotating compact object like a spinning black hole. To get a nice large effect the period of the waves need to be of the same size as the spin rate.

The effect when its an near coherence mode is called super radiance.

For repulsion the effect is actually an absorption of gravitational energy from the wave, so that the object starts to move in the same direction as the wave. See Figure 16 of Brito: - http://arxiv.org/pdf/1501.06570v3.pdf

The effect can be quite pronounced. 10% of the incoming energy of the wave can be absorbed.

Not the answer you're looking for? Browse other questions tagged general-relativity gravity gravitational-waves or ask your own question.