If it's impossible to create matter then how can a Higgs Boson field give objects mass?

"the structure and properties of matter"

If the only two objects without mass are gluons and photons then do a combination of the two somehow create Higgs Boson fields? What about Dark Matter and Dark energy, could they be involved? Or do we just not know the answer to this? Is any matter being created or is it just being transformed?

Conservation of mass says that matter cannot be created or destroyed.

From this answer (below) by Luboš Motl Conservation of Energy, and also, for one example, from the idea of dark energy producing an expansion of the universe, it would seem that conservation of mass/ energy does not hold, at least in the way we view it in classical mechanics. Obviously matter was created at some stage after the Big Event, or we would not be here now.

If there was no particles with mass in the universe before a Higgs Boson Field swept through the universe then what was there.

If we take the Big Bang Beginnings article as a refence for the evolution of the universe, just after the big bang, initially there may have been purely radiation, which then as the temperature dropped, became a mix of radiation and particles. We don't know exactly what happened or existed before 10$^{-12}$ second. 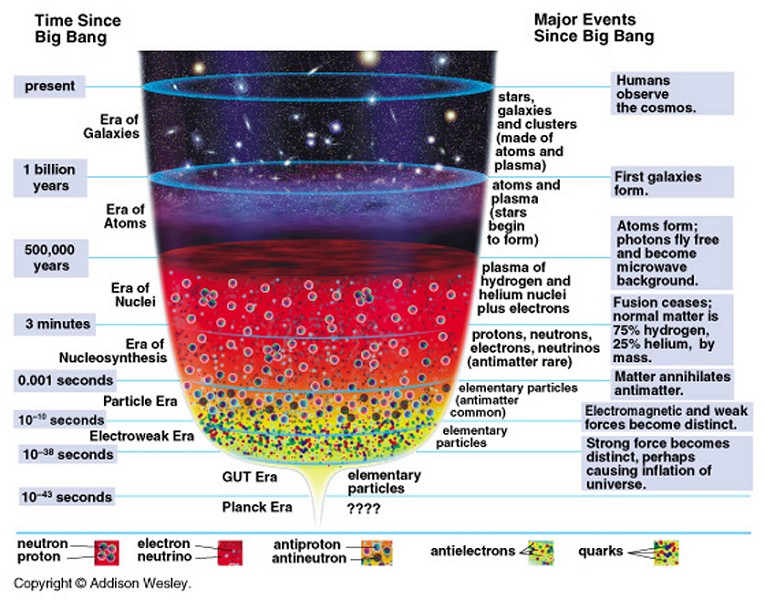 Image source: Timeline of the Universe

Quark Epoch, from 10$^{-12}$ seconds to 10$^{–6}$ seconds: Quarks, electrons and neutrinos form in large numbers as the universe cools off to below 10 quadrillion degrees, and the four fundamental forces assume their present forms. Quarks and antiquarks annihilate each other upon contact, but, in a process known as baryogenesis, a surplus of quarks (about one for every billion pairs) survives, which will ultimately combine to form matter.

I don't think anybody knows how close in time (or perhaps simultaneously) the creation of the Higgs Field occurred with respect to the appearance of the 4 separate forces.

Hadron Epoch, from 10$^{–6}$ seconds to 1 second: The temperature of the universe cools to about a trillion degrees, cool enough to allow quarks to combine to form hadrons (like protons and neutrons). Electrons colliding with protons in the extreme conditions of the Hadron Epoch fuse to form neutrons and give off massless neutrinos, which continue to travel freely through space today, at or near to the speed of light. Some neutrons and neutrinos re-combine into new proton-electron pairs.

Lepton Epoch, from 1 second to 3 minutes: After the majority (but not all) of hadrons and antihadrons annihilate each other at the end of the Hadron Epoch, leptons (such as electrons) and antileptons (such as positrons) dominate the mass of the universe. As electrons and positrons collide and annihilate each other, energyin the form of photons is freed up, and colliding photons in turn create more electron-positronpairs.

Nucleosynthesis, from 3 minutes to 20 minutes: The temperature of the universe falls to the point (about a billion degrees) where atomic nuclei can begin to form as protons and neutrons combine through nuclear fusion to form the nucleiof the simple elements of hydrogen, helium and lithium. After about 20 minutes, the temperature and density of the universe has fallen to the point where nuclear fusion cannot continue.

Yes, without a symmetry breaking Higgs Field, all possible particles, in addition to the force carriers you mention above, would have been massless.

I apologise, but I feel the the rest of your questions in your post require a separate answer.

Higgs fields belong to the relativistic regime of calculations.. As the answer by CountTo10 shows in the accepted model of the universe, there was energy and momentum and particles without mass, until the expansion reached the symmetry breaking energy where the Higgs field gave masses to weakly interacting elementary particles, including the Higgs boson itself, around 10^-10 seconds.

If the only two objects without mass are gluons and photons then do a combination of the two somehow create Higgs Boson fields?

There is no "creation of fields " in this model. Fields are presumed to exist and then the mathematics develops predictions which have been tested again and again.

What about Dark Matter and Dark energy, could they be involved? Or do we just not know the answer to this? Is any matter being created or is it just being transformed?

Dark matter and dark energy are a subject of current research. Dark matter may be a consequence of the fields of the standard model or maybe not. There might be particles called Wimps creating dark matter, but there exist other models attempting to explain dark matter.

Dark energy is invoked to explain the accelerating expansion of the universe, and that is the stage the mathematical modeling of the universe has arrived. Presently the particle models have no connection with dark energy, as the masses involved in particle physics are minuscule and the gravitational interaction negligible at the particle level. The question should be addressed to a unified quantized standard model when it is found A model that unifies gravity to the other three forces. Research is going on.

Is any matter being created or is it just being transformed?

The current BB model of the universe assumes that after the inflation state the energy and momentum of the present universe follows conservation of energy and momentum, thus energy is transformed to mass and back , not created. The need for dark energy though indicates that energy is entering in the system in the form of separation of massive clusters. This does not lead to the microcosm of particles where masses are created and destroyed, directly, but yes, matter may be created by the influx of dark energy.

Again, dark matter and dark energy are a subject of current research :observational, experimental and theortical.

Not the answer you're looking for? Browse other questions tagged mass conservation-laws standard-model higgs matter or ask your own question.

26
Is the law of conservation of energy still valid?