Unlike a sea wave, whose motion is only apparent, a moving vortex ring actually carries the spinning fluid along. Just as a rotating wheel lessens the friction between the core and the surrounding stationary fluid, allowing it to travel a long distance with relatively little loss of mass and kinetic energy, and little change in size or shape. Thus, a vortex ring can carry mass much further and with less dispersion than a jet of fluid. 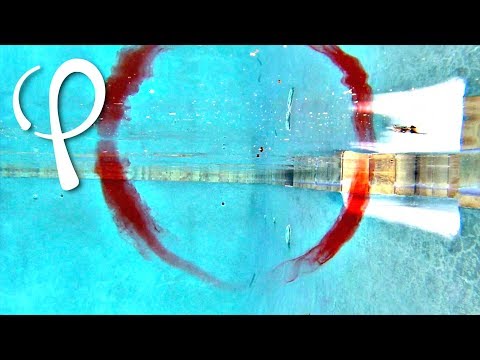 Not upwards, but with good examples for vortexrings 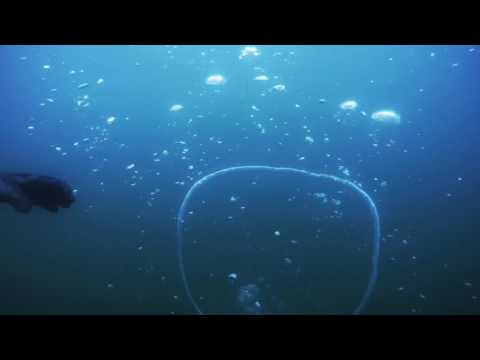 What will be the loss in Vorticity of a Vortex ring per meter, starting at 200m depth? Wikipedia Vorticity

(Pre-Edit-Question{deprecated}:What will be the loss in mass of a Vortex ring per meter, starting at 200m depth?)

I'm interested, if a colored vortex ring or a bubble ring(with colored fog (particles)) could be used for an autonomous robot, that operates underwater and communicates with another autonomous robot, which dives close to the water surface or flies (bigger cone for observation) above it.

This results in the following further questions: What is the stable max distance

can travel upwards in freshwater and saltwater,

which occur typically in an ocean in depths from deepwater all the way up to the water surface?

Unlike computer simulations the physical environment is fraught with imperfections often not only too difficult to model, but also quantify with any degree of confidence. This fact even more prevalent with regards to fluids and vortex motions are at the extreme ends of fluid mechanics theory; soliton waves.

Your question maybe impossible to answer by any means of analysis but perhaps somewhat predictable with confidence using finite element simulations of 3 dimensional flow (CFD), but to run such a simulation over the distance/time you are asking for will likely lead to the wrong "answer" if not numerical instabilities.

The best way to determine what you want to know is by experiment plain and simple. So that's where you really should invest all your time and resources.

Smoke rings do carry the smoke particles with them, but the imperfections at the boundaries of the rings, localized disturbances during their travel can cause the vortex to shed some of this mass.

The best way to observe this behavior is to just use an inexpensive cardboard box with a hole cutout to serve as a 'cannon' and fill the box with smoke from a 'fog machine' like those used for theatrical use or Halloween parties. The rings can travel and carry the fog with them for an incredible distance (across a room) but you can observe shedding of particles as the travel.

Not the answer you're looking for? Browse other questions tagged fluid-dynamics energy vortex bubble or ask your own question.

4
Frequency of Vortex Shedding
0
What is the difference between a vortex ring and a circular line vortex?
11
The optics of vortex (in water): why there is a bright ring?
2
Does a whirlpool(vortex in water) continue in air(vortex in air),and when does a vortex stop?
0
Lifting line trailing vortex/vortex sheet inside flow field
3
Why does this vortex bubble ring bounce off the surface of the water?