Which wave causes interference in the double slit experiment?

If it is caused by electromagnetic waves interfering, then is it fair to say that polarizing both slits differently to perform a "which-way" experiment only removes interference because light that is polarized differently

If it is caused by probability waves interfering, then is it fair to say that polarizing both slits differently to perform a "which-way" experiment isn't really measuring which way they went? It is only "setting up" for a measurement. Why does interference go away when polarized differently if this is the case?

Focussing on just the one aspect of the question about the reason why polarization tagging of the slits would remove interference in the ``probability waves'' interpretation:

Firstly, as stated in the comments, one must be careful with this ``probability wave'' interpretation. It is really a probability amplitude and as such it carries all the degrees of freedom including the polarization of the state/field. When the part of the field from the different slits are tagged in terms of their polarization, the interference would go away. Effectively one `traces out' the unobserved degree of freedom, polarization. This really becomes clearer when you do the math. I can add that later, if you want (don't have the time now). Incidently, one can recover the interference with another polarizer behind the screen, if this polarizer selects out a common polarization from both fields.

The underlying framework of the physical world we have studied with our experiments is definitely quantum mechanical. The classical particles and waves emerge from this quantum mechanical level in a mathematically smooth fashion.

is a law of quantum mechanics which gives the probability that a measurement on a quantum system will yield a given result. It is named after its originator, the physicist Max Born.

It can be shown that classical electromagnetic waves are built up by a confluence of photons, but this needs the formalism of quantum field theory, which is based on the quantum mechanical postulates . A photon's wavefunction is derived quantum mechanically by a quantized Maxwell's equation and it should not be surprising that the solutions merge at the classical limit.

Note, a single measurement. In the case of the double slit single photon experiment it is the probability of a point being seen at the screen's (x,y). 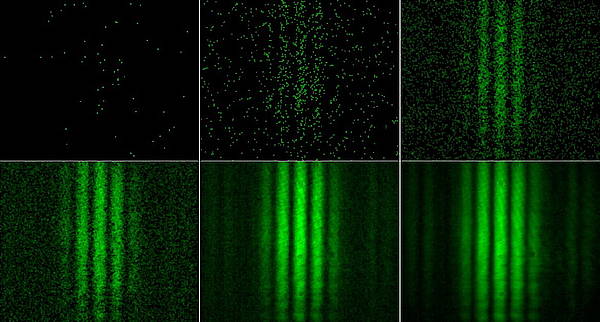 Viewed quantum mechanically that is what the interference pattern is, the distribution of photons builds up a probability density.

It is only "setting up" for a measurement.

Why does interference go away when polarized differently if this is the case?

In principle this probability density is the solution of the quantum mechanical boundary value problem " photon scattering on two specific slits". As the solutions of quantum mechanical equations are mostly sinusoidal, and sines and cosines when functions are added or subtracted usually show interference patterns, it should not be surprising that when the probability of measurement depends on sinusoidal distributions, interference patterns may appear or go away , depending on the boundary conditions, in this case the ones imposing polarization.

Not the answer you're looking for? Browse other questions tagged quantum-mechanics visible-light double-slit-experiment interference or ask your own question.