My first thought was to get h, which is relatively easy but i had a problem choosing between 2 methods: first one was to assume it was a lumped system (the sphere) and use the exp(Bi*F) rule where the h will be the only unknown, or I can use the Heisler Charts where I have the temperature ratio and the Fourier number and I can use them to get the 1/Bi.

In both cases the h will result in a lumped system in the cylinder, but the final temperatures in each case is different ( 5 degrees different), so it's pretty obvious that one of them is true.

My professor solved using the assumption, but when I asked him he said that would work too but never said which one is more right, so is there any way I can test for the lumped system assumption with an unknown h?

A pic of the question is attached (question number 6) 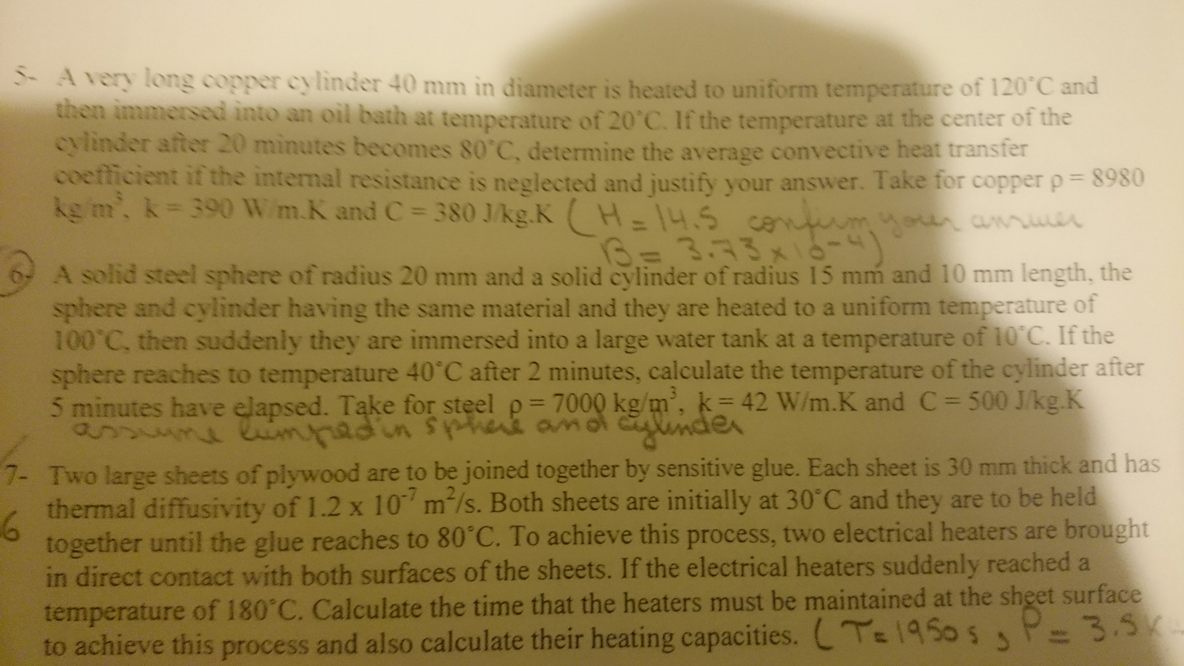 The Heisler chart is more accurate, so that is the preferred method. It takes into account the internal conductive resistance within the object. But, if you are in a hurry, and have experience knowing that the dominant resistance to heat transfer is the convective resistance, then you can use method 1.

There is another approximation you can make that is quite accurate, and lies somewhere between methods 1 and 2. It is a first order improvement on method 1, and the math is just about as simple. It takes into account the long time conductive resistance inside the sphere or cylinder. It is based on using the long time asymptotic solution to the problem of a constant flux at the surface of the object, for which the internal heat transfer coefficient (as characterized by the asymptotic Nussult Number) approaches a constant value. This resistance is in series with the outside convective resistance, so you can combine them into an overall Biot number. From there on in, the analysis is the same as in method 1.

9
When should I take wine out of the fridge - transient heat transfer problem
1
Work done by an expanding gas
2
Why does the system move until equal temperatures are obtained?
0
Fourier heat conduction and temperature gradient
0
When does heat conduction become convection?
1
Heat loss by gas compression - reversible vs. irreversible
0
Why is $pV=nRT$ not applicable to a water-steam cylinder system?
0
Technical definition of heat
1
Entropy and Heat Conduction