What are the physics behind a table tennis ball launcher?

I am trying to understand a bit of the physics behind a table tennis ball launcher.

The system works with two wheels spinning in opposite directions with different velocities. The ball goes through the middle and gets launched with some spin on it. The figure illustrates it. For simplicity, I am considering the launcher is placed horizontally aligned with the table. 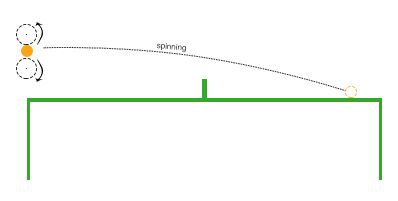 I will now apologize for any mistakes from now on, because I am pretty bad in physics, but I try my best.

Here goes a step-by-step of what I think happens:

Considering this is correct, I am having some trouble to write the equations. In (1), should I put in terms of velocity or force? So when the ball touches the wheels, two Forces are applied tangent to the ball in opposite directions. The difference of these forces generates a torque $\tau = r \times (F_1 - F_2)$. This torque starts a forward rolling movement with speed $V$. And from this speed, a horizontal launch.

The rollers in the launcher squeeze the ball and themselves deform or separate on springs as the ball passes between them. The force applied to the ball will vary in magnitude and direction and will last for an unknown time which depends on how much the rollers deform. Also, the ball is very light compared with the rollers - and with the rackets and the table - so when it makes contact with these objects and there is sufficient friction, it is reasonable to assume that the point of contact on the ball immediately takes up the speed of that object.

It would be sensible to ignore forces in the launcher and also when contact is made with the bat. However, if you intend to be realistic you will need to consider :

Rebound speed from the table or a bat can be calculated from the Coefficient of Restitution for that particular collision. The COR indicates what fraction of kinetic energy is lost during the collision.

Geometry of the Launcher :

I assume that the rollers have the same radius $R$, are mounted with their centres in vertical alignment separated by distance $2S$, and spin at angular frequencies $\omega_1$ (upper) and $\omega_2$ (lower) where $\omega=2\pi f$ and $f$ is the rotational frequency (rev/s).

If $V_1=V_2$ then the ball will be launched horizontally with no spin; if $V_1 \ne V_2$ then the launch speed, angle and spin are more difficult to calculate.

(FURTHER ANALYSIS IS IN PROGRESS) 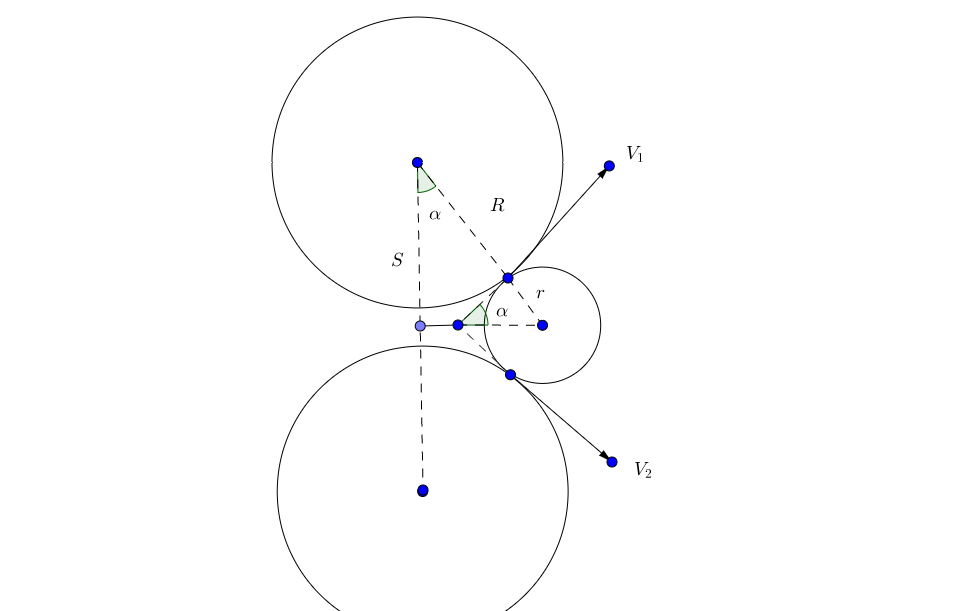 There are many resources on the internet dealing with the Physics of Table Tennis. I shall leave it to you to search for ones which are suitable to your purpose.

5
Trying to model pinball physics for game AI
4
Will two trains running along the equator in opposite direction experience same wear out?
7
In tennis, why does topspin serve bounce higher than flat serve?
0
How to calculate friction on a spinning ball on the ground?
10
Can a ball be struck to give it a spiral spin?
0
To what amount can sidespin change the flight curve of a ball?
2
Effect of forces inside a sphere
2
Which equation should I use to find torque?