Question 14 from the 1st chapter of H.Goldstein's book "Classical Mechanics":

Q: Two points of mass $m$ are joined by a rigid weightless rod of length $l$, the center of which is constrained to move on a circle of radius $a$. Express the kinetic energy in terms of the generalised co-ordinates.

My understanding of the problem tells me that the system has only $1$ degree of freedom, $\theta$, since the center of mass moves in a circle of fixed radius in a fixed plane. So there must be only one generalised co-ordinate. Now if I consider that the position vectors of the $2$ point masses are $\vec r_1$ and $\vec r_2$ respectively,then the constraints of the system are $$\lvert\vec r_2-\vec r_1\rvert=l$$ $$\left\lvert\frac{\vec r_2+\vec r_1}{2}\right\rvert=a$$

But I cannot find out the generalised co-ordinate from here on. Can you tell me if I am right about the degrees of freedom of the system? And am I on the right track? How should I proceed?

Also, one more thing is that there is nothing written if the masses are rotating about their center of mass. Do I have to make a special case for it?

This problem, as most problems from Goldstein's "Classical Mechanics", must be carefully analysed. They are not easy.

Having said that, I want to propose a solution to this problem. The original question was about the number of degrees of freedom. We are going to get there, and also write the full expression for the kinetic energy.

The mass of the two particles are equal and the center of the rod is constrained to move in a circle. Therefore, the center of mass (CM) coincides with the rod center and it is also constrained to move in a circle. The CM may be described by one variable only, the angle $\Theta$ in respect to a fixed axis - let's say $X$ - whose origin is fixed in the center of the circular trajectory. If the CM is restricted to a circular motion, then it is equivalent to say that its trajectory is restricted to a plane (-1 degree of freedom) in a circular path (-1 degree of freedom). So we are left with $n = 6-2 = 4$ degrees of freedom.

Let's now analyse the movement of the particles with respect to the CM. The statement of the question does not restrict the particles to a plane motion, so we should consider the rod which connects them to move in a 3D space. The constraint eliminates one more degree of freedom, so we are left with $n=4-1=3$. Unless one further restricts the rod motion to a plane, the system has exactly $n=3$ degrees of freedom. That answer your question, but let's now calculate the kinetic energy.

I think the attached manuscript is the answer to your question... 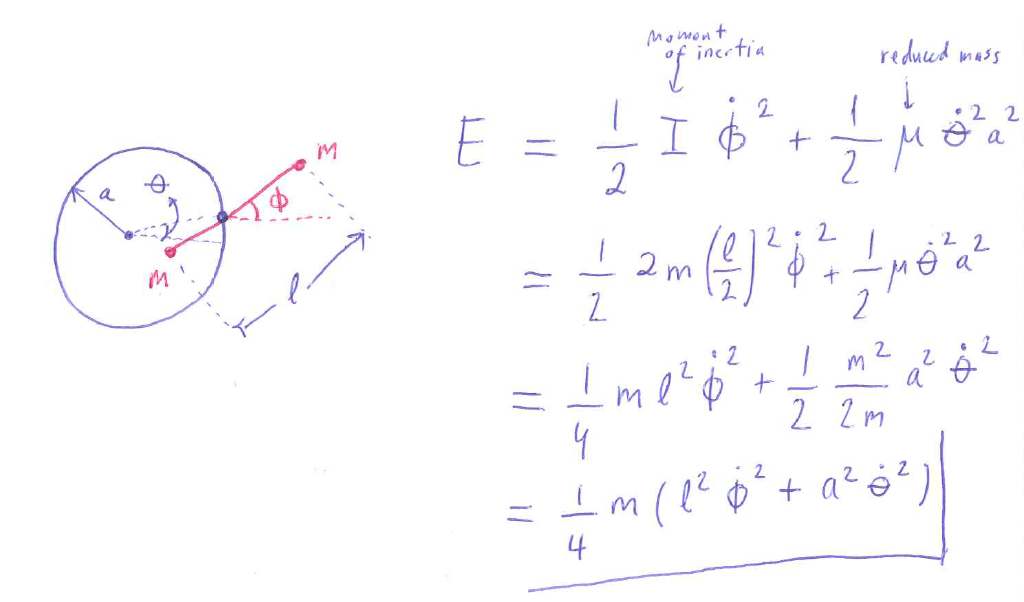 Not the answer you're looking for? Browse other questions tagged homework-and-exercises classical-mechanics lagrangian-formalism constrained-dynamics or ask your own question.

1
Beads sliding on a hoop
0
Computing relative velocities from angular velocity
3
Holonomic constraints and degrees of freedom
0
How to determine the equations of motion of a rigid body's center of mass from a constraint?
2
Trying to find the Lagrangian between two non-interacting particles
0
Lagrangian of two balls in space
2
Question on the definition of the potential energy for a two particle system