Why does atmospheric water vapor need dust particles to fall as rain?

I appreciate that rain can fall due to the process of coalescence described below, but I was under the impression that nucleation based around atmospheric dust particles was a vital part of the process, and is responsible for most rain showers.

In clouds below freezing, when ice crystals gain enough mass they begin to fall. This generally requires more mass than coalescence when occurring between the crystal and neighboring water droplets. This process is temperature dependent, as supercooled water droplets only exist in a cloud that is below freezing. In addition, because of the great temperature difference between cloud and ground level, these ice crystals may melt as they fall and become rain. 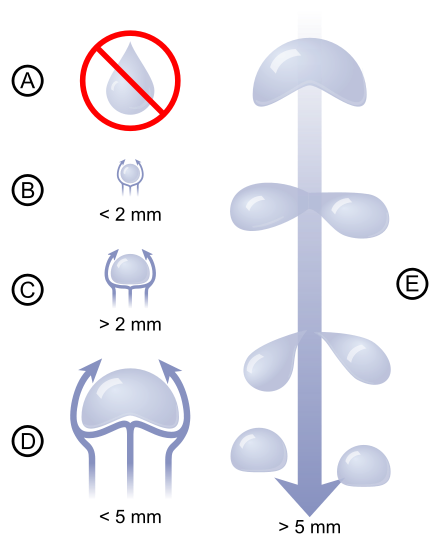 About a year ago I read An Introduction to Thermal Physics: Daniel V. Schroeder and although I can't find the book at the moment to check, I am pretty sure that the author did stress the importance of atmospheric dust, it's just I can't remember his explanation.

Cloud seeding by aircraft in drought prone areas is another factor illustrating the importance of nucleation, in this case using silver iodide.

Why don't clouds rain more often, as the water vapor "droplets" are randomly pushed together by both differential heating in the cloud and air turbulence, which is usually greatest at the base of the cloud?

Why the need for dust as the initiator of rain (and hail/ sleet)?

There is a related question Why does water fall as streams, but it doesn't address the seeding issue.

In principle, when the concentration of water vapor exceeds the saturated vapor pressure, droplets should form. But there is a problem.

A very small droplet of water has a relatively large amount of energy stored in the surface - this is a consequence of surface tension, which has units of energy per unit area. For a small drop, the energy required to create the surface is large compared to the energy gained by water becoming a liquid - the former scales with $r^2$ while the latter scales with $r^3$, so for sufficiently small $r$ it stands to reason that the surface energy is larger than the volume energy.

This prevents a small drop from forming, and it prevents two small drops from coalescing - in order for two little drops to become a big drop, they have to go through a phase where the surface area is bigger before it gets smaller. The smaller the drops, the larger this effect. See for example this paper if you want a LOT of detail, or also this description - a lot more accessible. From all this we conclude it's hard for a big drop to form spontaneously. So you need "something" that starts the process - a nucleus that helps overcome the surface tension term, and that allows a drop to get past that critical small stage.

And that's why it is much easier for vapor to condense into small droplets in the presence of small particles.

You might be interested in this answer I wrote earlier on a related topic - namely the formation of haze in high humidity areas with and without particulate contamination.

Droplet formation begins when $H_2O$ molecules come and stick together, and the aggregate begins to grow by adding more and more molecules to itself. Problem is, molecules that have formed a bond, can become unstuck again easily. In the absence of aerosols, you therefore need a large number concentration (equivalently, high vapor pressure) of water molecules so that some reasonably large aggregate may form. What an aerosol, which must be hygroscopic, does is that it provides sites where aggregation of water molecules is improved, because molecules do not come unstuck from the hygroscopic aerosol easily (I don't know the chemistry part of it, sorry). So without appropriate aerosols, droplet formation is practically impossible, and so a cloud would not even be born.

Once a droplet of reasonable size, say $1~\mu$m, is formed, it is not yet out of the woods. At these small sizes, their collision cross-section is small, so growth by collision is not a viable option for them. Also they follow the air flow very closely (as a tracer particle would), further reducing the chances of collision. They must grow by condensation of water vapor, which is a slow process of growth, compared to what can be achieved by collision and coalescence. That is why clouds don't rain often, because there is this initial bottleneck to be overcome. Once the droplets grow to a size of say about $40~\mu$m, their interaction with turbulence in the cloud (open research topic) increases and collisions become more frequent. Once droplets have grown beyond say about $200~\mu$m they begin to fall and collect droplets in their path and grow. You get rain.

41
Why is the sun brighter in Australia compared to parts of Asia?
28
Why doesn't rain fall down in streams (as opposed to drops)

3
Are there convective movements similar to those in clouds everywhere in the atmosphere?
3
How do convective clouds form?
2
Why do few droplets of rain fall a short time before a downpour?
4
Why doesn't lightning stop when it starts raining?