How can there be weight without movement? [duplicate]

Weight is a force. Force is mass × acceleration.

EDIT: Thanks, @Inquisitive for showing me that the acceleration component of force need not be explicit and allowing me to understand this concept of weight logically and mathematically.

My explicit acceleration of 0 is irrelevant to this equation. The magnitude of gravitational acceleration is the correct acceleration to use in this figure. The word "acceleration" caused the misconception that something would be visually observable, namely movement.

Even though you aren't moving, you are still being subjected to a gravitational acceleration.

The normal force is acted on you by the floor, and the sum of both is zero, but your weight is still the same.

You are missing one or both of the following in your understanding of weight:

The first point means that just because an object isn't accelerating doesn't mean there aren't forces acting on it. It's just that those forces happen to all sum up to zero in this case. That is, just because $a+b=0$ doesn't mean that $a$ and $b$ themselves are $0$. Weight is just one of those, not the sum.

Here's the two most relevant forces for your question (source): 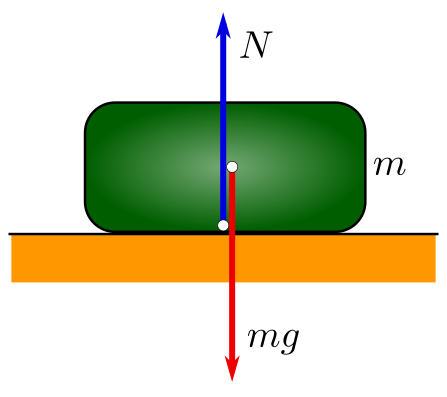 There are two forces there:

For an object that isn't accelerating, $N + mg = 0$, or $N = mg$ (for simplification let's just say those are the only two forces acting on the object, that's all that really matters for this illustration). "Weight" is just one of those.

As an aside: Now as for which one of those we consider "weight" to be it really depends on context and definition. There are a few definitions of weight, the two main ones being:

The main difference between the two is whether you use "weight" to refer to the force of gravity pulling down on you vs. the force of the ground pushing back on you, since there are other forces besides just gravity that the ground may be counteracting to keep the sum at 0.

I think in common conversation most people mean the gravitational definition (like if you were sky diving and the person next to you asked you how much you weigh you'd probably give them your scale weight... unless you were being pedantic and responded "Gravitationally, or operationally?"). But anyways that's beside the point.

The key idea, in any case, is that just because you aren't accelerating doesn't mean there aren't forces acting on you. The net force acting on you is 0 if your acceleration is 0, but the individual components need not be 0, and "weight" just refers to one of those.

If people use the expression $mg$ to calculate force it is only because they define $g\equiv \frac{GM_{earth}}{R^2}$. It is also equal to the acceleration you would have if you were to be in free fall.

Weight is the force of gravity acting on your mass. When you stand motionless on a scale, there is a vertical force pushing up, known as the normal force, which exactly equals your weight. The normal force is being provided by the spring that is in the scale that you are standing on. Due to your weight on the scale, this spring is compressed to some degree. The manufacturer of the scale knows how much the spring will be compressed when it supports a given weight, and this is used to indicate your weight as you are standing on the scale.

To directly answer the question of how there can be weight without movement, your weight is exactly equal (and in opposite direction) to the normal force from the scale. Due to this, there are two forces involved, and a free-body diagram indicates that there is no net force on you. If there was a net force on you, you would accelerate in the direction of that force, according to Newton's 2nd Law.

Your question is based on the wrong assumption that your weight is equal to the total sum of the forces acting on you. The common notion of weight is instead the force acting on you due to gravitational field.

You can't feel the force of gravity, because it's uniform as far as your sensory equipment is concerned. Imagine your body as a spring - your sensors can tell you when the spring changes load (and gets shorter or longer). But under gravity, the same force "tugs" on your head as on your feet, so the "spring" keeps the same length, and has no net force.

However, things get more interesting where more forces get involved. You stand on the ground, which exerts a force on you that's the same magnitude as the gravitational force, but in opposite direction. This means that even though there are two forces acting on you, you experience no net force - the two forces cancel out.

Now, if the electromagnetic force that prevents you from falling through the ground was uniform, you wouldn't feel anything, and you'd just keep floating as if you were in orbit around the Earth. However, that's not the case here - the force gets stronger as you get closer. It's extremely strong in the area of contact between your feet and the ground (don't forget that it supports your entire weight against the pull of the entire planet), but it doesn't quite reach even into the skin on your feet. However, the skin of your feet is still tugged by gravity, so it wants to go down - only to press against the lower layers. It's this difference in forces that we can perceive - that's how you feel the ground beneath the feet.

A scale works in a similar way. In a typical mechanical scale, you have a static part (in contact with the ground), a spring of some kind, and a moving part you step on. The spring acts similar to the electromagnetic force (in fact, that's what ultimately drives it, but that's not important here) - the more compressed it is, the higher the force it exerts. So once you step on the scale, the spring compresses until it reaches an equillibrium - the force of gravity on your body exactly balances the force the spring (and the scale) exerts on your feet. At this point, there is no longer any (macroscopically important) acceleration - and yet, we can tell that the scale is slightly smaller than before you stepped on it. By understanding the way the spring is compressed under load, we can deduce how much load corresponds to a given compression of the spring.

But the main point in the explanation is the equillibrium. You only get a readout when the two forces balance each other out - that is, the sum of the forces acting on the scale adds up to zero, and there is no net acceleration.

And this is where F = ma comes together - you need to add up all the forces acting on a body to get the acceleration. When you start falling, there is little force opposing your fall, and the acceleration of your body is close to g. As you pick up speed, the air gets less capable of moving away from your path, and starts slowing you down - a force that acts against gravity, so your acceleration gets smaller, even though gravity is as strong as ever. Finally, if you fall far enough, the air resistance becomes so great, that it fully supports your weight against gravity - there is no more acceleration, the forces are balanced. But it's still an equillibrium - if you turned the force of gravity acting on you off for a few seconds, you would quickly slow down and eventually (in a few hours, probably) stop moving entirely.

But through all this, your weight is always the same - it's always exactly the force of gravity acting on your body, whether your body is supported (which makes you feel the weight) or not (the "weightless" feeling).

First, let us go back to the time when this formula was devised. We knew that an object can be pushed and it can have different magnitudes. Now, the basic problem arose, how to measure this push or the force?

Not the answer you're looking for? Browse other questions tagged newtonian-mechanics forces mass acceleration weight or ask your own question.

5
How can you accelerate without moving?
8
If $F=ma$, how can we experience both gravity and a normal force even though we are not accelerating?
1
Force when acceleration is zero

233
Don't heavier objects actually fall faster because they exert their own gravity?
5
Can mass be directly measured without measuring its weight?
6
Is there a difference between Weight and Force of Gravity?
1
Practical limit of equivalence principle
11
How does the force of tension really work?
1
Apparent weight and true weight
4
Is Newton's first law an “If and only if”