In the vector equation for the electrostatic force:

I've found that $(1)$ leads to contradictions, if either $q_1$ or $q_2$ is negative, as the unit vector $\hat{r}$ needs to have one of its entries negated (corresponding to a geometrical 'change in direction' of the vector) in order for $\vec{F}$ to be logical.

If $(2)$ is used however, no contradiction arises, and the unit vector does not need to have any of it's entries negated, thus we don't need to 'change the direction' of the vector as our result for the force $\vec{F}$ 'makes sense'

Which is the correct vector equation for electrostatic force $(1)$ or $(2)$?

My university makes use of $(1)$, in formula sheets for lectures/tests/exams, but not $(2)$ and our lecturer has not explicitly stated that the absolute value of $q_1$ and $q_2$ must be taken, which is why I've asked this question.

Your formula (1) does exactly this. The coefficient $\frac{1}{4\pi\epsilon_0}\frac{q_1 q_2}{r^2}$ is positive when $q_1$ and $q_2$ have the same sign, and negative when they don't. If you take the absolute values, as in formula (2), the coefficient is positive in all cases, so that will give the wrong result for opposite-signed charges.

I'm not quite sure how you found that equation (1) leads to contradictions; there's no need to alter the unit vector $\hat{r}$.

You could take the opposite convention for the direction of $\hat{r}$, i.e. take it to point from the charge experiencing the force to the charge exerting the force. This is not conventional, and it will confuse a lot of people, but it is physically valid. In that case, you would need to put an overall negative sign in the formula, like this: $$\vec{F} = -\frac{1}{4\pi\epsilon_0}\frac{q_1 q_2}{r^2}\hat{r}\tag{opposite convention}$$ But still, the same argument as above will show you that the results you get are incorrect if you take the absolute values of the charges.

I think (and it took me a bit of thinking and editing) that the main problem here is that we need to specify very carefully about the force on which charge we are talking.

(1) is the standard version for the force one of the charges feels from the other if the other one is sitting at the origin and is correct in classical electrodynamics. It does however depend on the coordinate system and on putting one charge (the one we do not care about) in the origin if I am allowed to interpret $r$ as the radial component of spherical coordinates and $\hat{r}$ as the corresponding unit vector. For better generality I do however prefer $$ \vec{F}= \frac{1}{4\pi\epsilon_{0}}\cdot\frac{q_1\cdot q_2}{|\vec{r}_1-\vec{r}_2|^3}\cdot (\vec{r}_1-\vec{r}_2) $$ This is the force that charge $q_2$ exerts on $q_1$, while the one that charge $q_1$ exerts on $q_2$ is given by: $$ \vec{F}'= \frac{1}{4\pi\epsilon_{0}}\cdot\frac{q_1\cdot q_2}{|\vec{r}_1-\vec{r}_2|^3}\cdot (\vec{r}_2-\vec{r}_1) $$ Observe that the direction of the force depends on which charge we are talking about. This becomes especially important when we choose e.g. $q_1$ to be sitting at the origin and use spherical coordinates to express the force onto $q_2$. Then the force needs to be outward for same charges and inward for opposite charges. This is exactly what your formula (1) achieves. The change in direction comes from the prefactor which becomes negative or positive.

Which is the correct vector equation for electrostatic force (1) or (2)?

If (2) is used however, no contradiction arises, and the unit vector does not need to have any of it's entries negated, thus we don't need to 'change the direction' of the vector as our result for the force $\vec{F}$ 'makes sense'

The unit vector's components don't change, and now you have the contradiction of not being able to have attractive forces ($\vec{F}_{12} \propto -\hat{r}_{12}$). 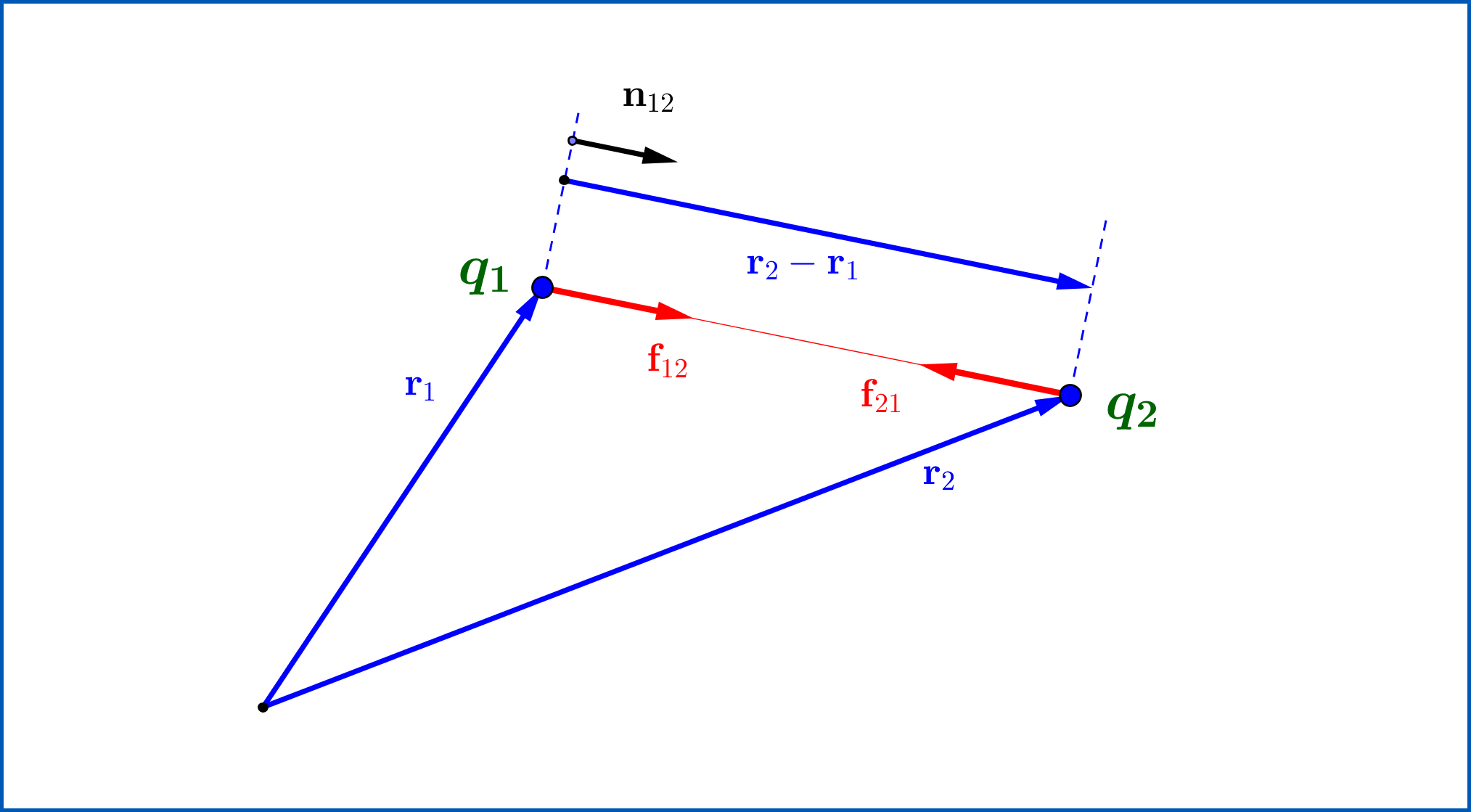 Not the answer you're looking for? Browse other questions tagged electrostatics charge vectors conventions coulombs-law or ask your own question.

0
Generalized Coulomb's Law
3
Electrostatic energy integral for point charges
0
Application of Coulomb's Law
1
What is the “truth” of the electrostatic force?
0
How to interpret $\hat{n}$?
0
Confirmation of Direction of Electric Field
0
Unstable equillibrium of a charged rod in an electrostatic field
0
Would this electrostatic force written in this form be conservative for some n different from 2?
0
Why torque and force between two electric dipoles are not equal and opposite, is it violation of newton's 3rd law?