Is the number of dimensions predicted by String Theory related to the Poincare group?

Question: Is this a coincidence? Or is it the main idea why physicists began to consider the possibility that the universe might be ten-dimensional?

No rigorous justification of your answer is necessary for me, since I don't think I have sufficient background to understand it. Answers linking to papers or citing references might be better received by other people who view this question and actually understand the answers, however.

Background/context: I was thinking about how the fact that O(3) has two path components actually corresponds to real-life geometric observations about rotations, reflections, and orientation. Then I thought "too bad it is a subset of 9-dimensional space and thus doesn't have any physical manifestation". Which led to the thought -- maybe it does, since string theory predicts that we live in more than three dimensions.

(It turns out this line of thinking was dumb anyway though since apparently SO(3) and presumably also O(3) is a three-dimensional manifold, so it actually wouldn't that be far-out to imagine that we lived in the tangent space of it, but whatever.)

Anyway I remembered that SO(3) wouldn't be the appropriate model to consider, since physical theories postulate that we actually live in four-dimensional spacetime, rather than three-dimensional spacetime, so I should look for the dimension of the analogous matrix group for "rotations" or "symmetries" for spacetime. I thought it was the Lorentz group (which doesn't work because it only has six dimensions) but Wikipedia corrected me and it turns out it is the Poincare group, which apparently is ten-dimensional -- just like string theories postulate for the universe.

The answer is most likely no: although string theory requires some sort of critical dimensions, they usually come in by requiring some quantum anomalies to vanish. For example, for bosonic strings propagating in flat space, the vanishing of Weyl anomaly, which is defined as the expectation value of the trace of energy momentum tensor, suggests that the dimension should be 26, although it could be modified if one considers strings propagating in curved backgrounds.

The quickest way to see the origin of the various dimensions that appear in string theory is to use the Green-Schwarz action functionals for super $p$-branes, including the Green-Schwarz superstring ($p = 1$):

these are the sigma-model action functionals for $p$-branes with manifest spacetime supersymmetry. They are secretly (see here for references) WZW-type models (or rather: higher dimensional analogs) for the spacetime supersymmetry algebra $\mathrm{Iso}(\mathbb{R}^{d-1,1\vert N})$ (the super Poincaré Lie algebra), and as such they exist only if a Lorentz-invariant $(p+2)$-cocycle exists on this super Lie algebra (the term responsible for $\kappa$-symmetry).

These cocycles may be classified, and they exist only for a finite number of combinations $(d,N,p)$ of

and rigorously established in Brandt 12-13.

The resulting classification then looks like a tree, the "Brane bouquet" 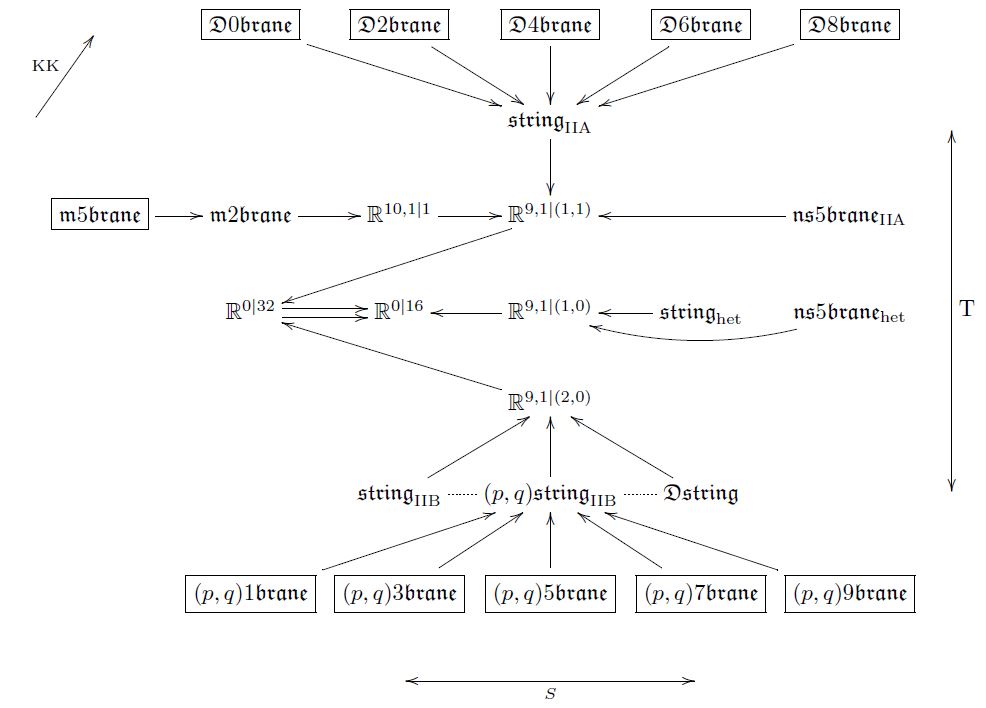 It is not only the spacetime and brane worldvolume dimensions which are exlained this way by super Lie $n$ algebra theory, also much of the core structure of string/M-theory is govered by these algebraic structures. For instance the duality between M-theory and type IIA strings may be read off Lie $n$-algebraically, this is discussed in

It might. The Poincaré group can be generalized in the Bacry Lévy‐Leblond classification (https://aip.scitation.org/doi/10.1063/1.1664490) -- a 3 parameter family of symmetry groups -- that includes the Galilei/Bargmann groups, [anti-]Newton-Hooke, [anti-]deSitter, and many others. To consistently unify this with the central extension (Bargmann) of Galilei requires also adding in an 11th dimension. At this point, you begin to get deja vu.

The Pauli-Lubanski 4-vector of Poincaré generalizes to a 5-vector that is also associated with a quadratic form, whose signature may vary between 5, 4+1, 3+2 (the anti-deSitter case) as well as singular cases 3+1(+1), 3+0(+2) and others.

One of the parameters controls the c → ∞ (in which time becomes absolute), another controls the c → 0 (in which space becomes absolute) -- both can actually be enacted together (the results include the Static Group which has the same central extension as the Carroll group, one of the c = 0 cases). The third parameter controls the curvature of the spatial geometry and/or temporal geometry (only the latter, in the cases of [anti-]Newton-Hooke). Setting it to 0 produces the 5 "flat space" groups (Poincaré, Galilei/Bargmann, Carroll, Euclid-4D, Static).

In other replies, we've already seen an independent account for how the 10 and 11 dimensions arise. This does not rule out the possibility that a correspondence may exist between this and what I just described.

I suspect there is a correspondence here awaiting discovery. If I knew more about string theory, I would look for it, myself; and draft some kind of Rosetta stone to link and systematically line up the two descriptions side-by-side.

Not the answer you're looking for? Browse other questions tagged special-relativity string-theory spacetime spacetime-dimensions poincare-symmetry or ask your own question.