Why aren't trigonometric functions dimensionless regardless of the argument?

I don't understand why it is so. Why do we need to check the dimension homogeneity of the term inside the $\sin$ to conclude whether the equation is dimensionally correct or not?

One definition of the sinus function (in fact, the one probably used by your calculator) is $$ \sin x = x - \frac{x^3}{3!} + \frac{x^5}{5!} - \cdots $$ This definition is dimensionally inconsistent unless $x$ is dimensionless. The proof that this gives you the familiar trigonometric sine if $x$ is the ratio of two carefully chosen lengths takes you through a surprisingly interesting swath of mathematics.

The sine function $\sin(\theta)$ is defined as a function of an angle $\theta$ (measured in radians). So the question amounts to asking why an angle must be dimensionless. (Of course, the answers invoking properties of Taylor series are also correct.) The angle $\theta$ between two directions is defined as the ratio $\theta = a/r$, where $a$ is the arc length connecting the endpoints of a pair of lines of equal length $r$ pointing in those directions (see diagram below). An angle is therefore a ratio of two lengths, making the angle dimensionless. In particular, it doesn't matter if you measure $a$ and $r$ in metres, centimetres, inches or parsecs, the answer for their ratio $\theta$ will always be the same. 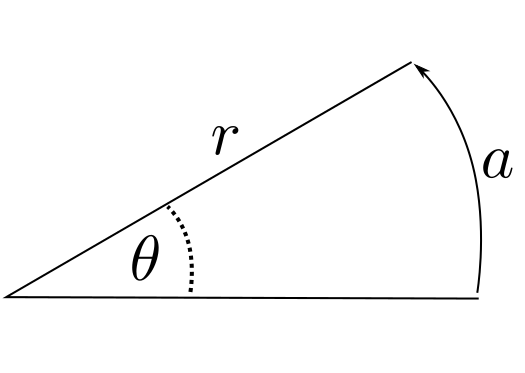 You will meet this idea again and again in Physics and checking the dimensions often is a good way of checking a derivation.
The charging and discharging of a capacitor $C$ through a resistor $R$ has a term $e ^{-\frac {t}{RC}}$ and so if $t$ is a time then $RC$ will also have the dimensions of time so that $\frac{t}{RC}$ will be dimensionless which would not be case if the derived expression contained $\frac{tC}{R}$.

All maths functions can only be used with dimensionless arguments. The reason is quite boringly that these functions are only defined for real numbers, or perhaps integers, complex numbers, real vectors. But time is none of these.

The only exception you can make are homogeneous functions, especially linear functions. A linear function allows to you pull physical units (which are basically just multipliers) in and out of the argument, so you can use an $\mathbb{R}\to\mathbb{R}$ function as well as a function mapping times to times (or, at least, time-differences to time-differences). With a homogeneous function, you can do the same, but may pick up some power on the unit in the process.

In Physics you do not calculate with numbers you calculate with physical quantities which have a magnitude and a dimension/unit. So in order for an equation to make any sense it must be dimensionaly correct: you can only add and substract quantities with the same dimensions and function arguments must be dimensionless: Log(x), Sin(x), Exp(x)... and so on only make sense if x is a dimensionless quantity. @Rob gave an explanation for that. It makes no sense to add for example one meter and one second, that is just not defined.

It has a wave vector $\vec{k}$ with an norm $|\vec{k}|=k=2\pi/\lambda$, an angular frequency of $\omega=2\pi/T$, an amplitude $A$ and a phase $\phi$, where $\lambda$ is the wave length and $T$ is the period. The amplitude can have an arbitray dimension which determines the dimension of the wave.

Your instructor is correct. The argument of sine (ie $kt$) should be dimensionless - eg an angle in degrees or a fraction of $2\pi$.

However if $k$ is dimensionless and $t$ is time then $kt$ has units of time and is not dimensionless. So this combination of units cannot be correct.

Not the answer you're looking for? Browse other questions tagged homework-and-exercises dimensional-analysis or ask your own question.

11
Why is it natural to look for solutions involving dimensionless quantities?
8
Do standard treatments of the Buckingham Pi Theorem gloss over this subtlety regarding signs?
8
Why do we nondimensionalize the Schrödinger equation when solving the quantum harmonic oscillator?
0
Application of Componendo and Dividendo Rule and Dimensional Analysis
0
Why do we treat the action as dimensionless in QFT?