What is the scientific basis for comets vs. main-belt comets being composed of different materials?

Do we observe different events or activities on main-belt comets, or do they behave exactly the same as regular comets?
(Apart from the obvious difference in orbit size/shape.)

The Wikipedia article for main-belt comets currently states the following:

If "active asteroids" behave exactly like comets, with no measurable difference in observation, how can he claim the two types of objects are likely composed of different materials, and operate with different mechanics?
What is the scientific basis for this differentiation?

The key is that asteroids (including "main-belt comets") have very different orbits from true comets, and this says a lot about their history.

Comets are located in the outer solar system. While they can occasionally be perturbed onto an orbit that takes them close to the Sun, these orbits are necessarily highly eccentric. That is, if you find yourself very far from the Sun, even though you may be on a course for the inner solar system you must return to where you are presently unless some further interaction occurs. The only way for something that started out far away to end up on a roughly circular asteroid-like orbit is to be perturbed inward and then somehow be perturbed again in the inner solar system in just the right way.

Thus most asteroids have been in that $2\mathrm{-}3\ \mathrm{AU}$ region for the entire history of the solar system. Conversely, an object that started out as an asteroid would have a very hard time ending up in a comet-like orbit, so comets must have formed far away.

Now consider the concept of the ice line. In the early solar system, when there was still a disk of gas a dust swirling around the Sun, somewhere around the present-day asteroid belt was the boundary between where volatiles like water and ammonia could freeze out. Beyond this line, you can get bodies consisting of mostly ice (unless they get too big and start collecting hydrogen and helium via gravity, in which case we call them the outer planets). But just as Earth is more rock and metal than ice, so too are many asteroids.

Moreover, the present-day ice line is at about $5\ \mathrm{AU}$. Inside this radius, exposed water will not last long (compared to the age of the solar system). If an asteroid were made of pure ice (like a comet), it would have sublimated billions of years ago.

The thinking is that when we see volatile outgassing from an asteroid, it must be a mixed ice-rock body that recently underwent a collision that exposed a new layer of ice. Now the exposed regions can outgas like a comet, but only for a relatively brief time.

I watched the video in your post, or a similiar one, on the BBC and from what I remember Jewitt was making a distinction between comets, asteroids and asteroids with "jets" of outgoing matter.

I am pretty sure main belt refers to the asteroid belt. 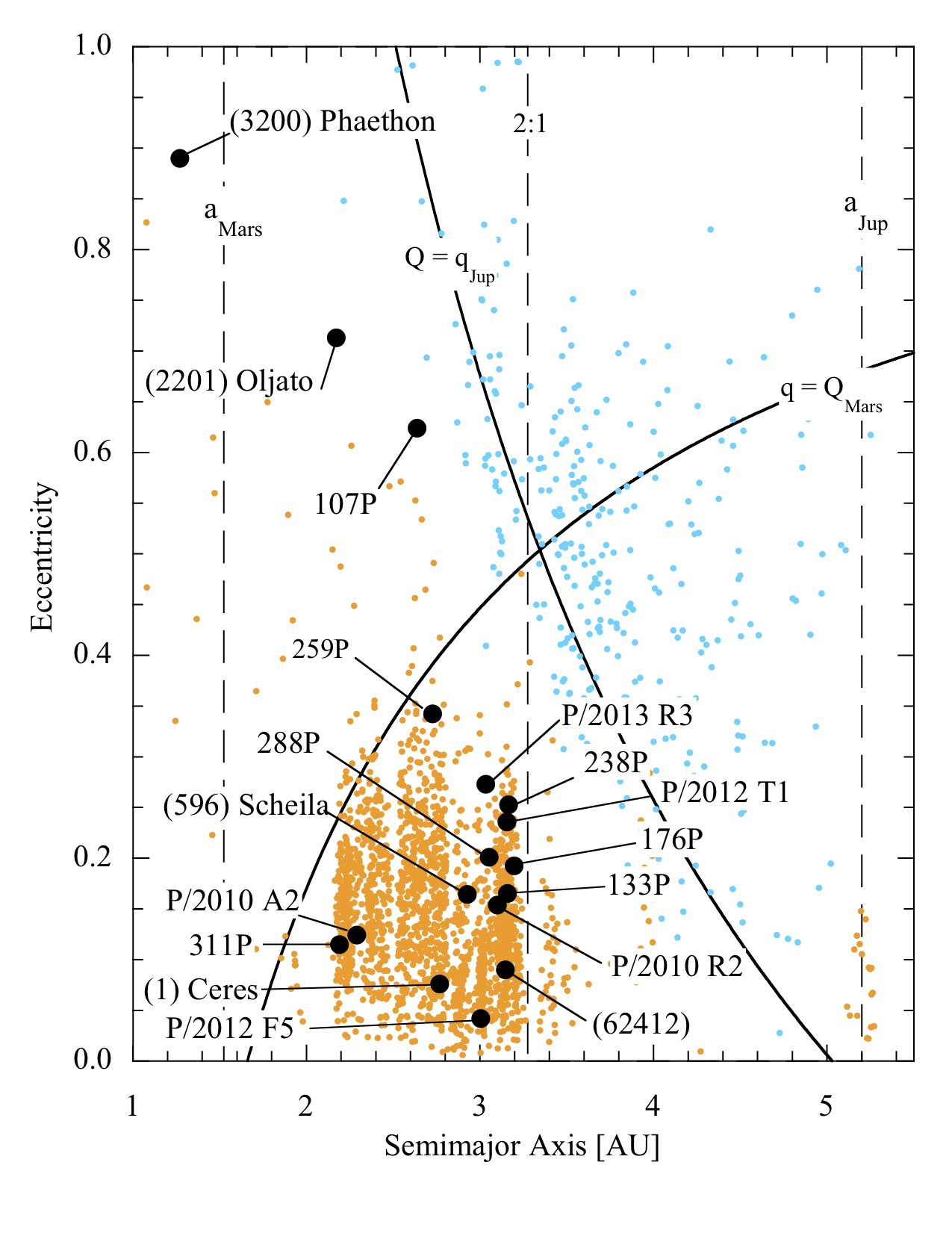 The significance of the activity is that at least some appear to be a distinct, third comet reservoir in the Solar system (after the Oort cloud and the Kuiper belt). There is no established dynamical pathway between these other reservoirs and the main-belt in the modern solar system, so any ice probably has led a different history from ice in the other comets. Comparing objects from the three reservoirs allows us to sample the protoplanetary disk of the Sun at three locations (the asteroid belt - near 3 AU and formation temperature near 150 K, Oort Cloud comets - 5 to 30 AU formation temperatures 100 to about 50 K; Kuiper belt - beyond 30 AU, 50 K and colder).

Active Asteroids are a newly recognized class of body in the solar system. They are remarkable for having both the orbital characteristics of asteroids and the physical characteristics of comets. What this means is that they look like comets because they show comae and tails but they have orbits interior to Jupiter's (a < a_J) and Tisserand parameters substantially larger than 3, like asteroids.

[Note: the definition is an empirical one, based on simple measurable quantities, and does not presume an origin for the comet-like activity by the sublimation of ice. In fact, as described here, there are many possible causes for mass loss from asteroids in addition to sublimation. For this reason, the preferred term for these bodies is "Active Asteroids". Formerly, we called them "Main Belt Comets" but this was misinterpreted by many people to mean that the active objects are necessarily icy. In most cases, we don't know if they are icy. In some cases we know that they are not.]

He states that some active asteroids are created by impacts, rotational bursting and other less likely effects such as thermal heating.

I believe it is safe to say the following:

Not the answer you're looking for? Browse other questions tagged astronomy astrophysics solar-system asteroids comets or ask your own question.

31
What is the average distance between objects in our asteroid belt?

2
What is the fate of the asteroid belt?
5
What does Orion's Belt look like from the Equator?
5
Are orbits interior to Jupiter's orbit less stable than orbits exterior to Jupiter's orbit?
31
What is the average distance between objects in our asteroid belt?
6
What is the scientific reason for the inclination of earth's rotation axis?
8
Are there any models for distribution of asteroid sizes in a belt?
0
Will 100 km body impact with Sun produce burn for people on Earth?
1
Astronomical objects that should have magnetic bubbles similar to those found by the Voyager probe at the edge of our solar system