However, things seema bit more nuanced and I feel like I've read some confusing info while delving deeper into the theory, which I'll elaborate on below. Imagine two methods of coherent combining:

Method A --> "Side-by-side", or "tiled", combining. N lasers are placed in an array with fill factor 1, all in phase.

Method B --> "Filled-aperture" combining. N lasers are combined using 50/50 beamsplitters and using the 100% constructive interference from one output when the phase is just right. 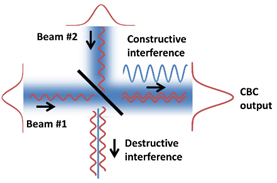 What I don't understand stems from the following paper: https://www.ll.mit.edu/news/Fan_LaserBeamCombining.pdf states that:

Another way to look at the nonideality of CBC systems is to recognize that, for the ideal phasing of an array of N elements, the on-axis far-field intensity will be N times higher than for the same array with no fixed phase relations (incoherent) among the elements [3]. This can be simply understood by recognizing that the radiance of the incoherent array is at best that of a single element and that an ideally phased system will have a radiance of N times this amount.

For method A (tiled), I can see how the emitting aperture grows (due to the array) and that the intensity scales indeed with $N^2$. However, for method B (filled-aperture), one of the characteristics is that the aperture size remains constant.

Then, does this indeed mean that using this coherent combining method, you'll really only get a factor N rather than $N^2$ higher intensity?
(If so, what happened to the square of the amplitude? Is there any way to increase the area to get the $N^2$ dependency?)

Some considerations that I felt fit not in the question, but might be useful:

For Method B, I'd say the total beam intensity scales with $N^2$ (lasers, constructive interference) and the divergence is unaffected, resulting also in an on-axis intensity of $N^2$, rather than the N suggested above. Extra: If the intensity ($W/m^2$) scales with $N^2$ increases, and the beam area remains the same, I'd still expect an $N^2$ dependency for the power as well, even though you can't 'make' extra power?

Asking the question, trying to explain my thoughts and the direction CuriousOne pushed me in with his comments made me think that I understand it now, so I'll try to go ahead and answer my own question:

YES, both method A and method B will increase the power of the final beam by a factor N. ONLY method A will increase the final intensity of the beam with a factor $N^2$: One factor is due to the power, another factor is due to the reduced divergence.
Where I thought methods A and B were different, but with similar end effects, I think I was wrong: Method A is better if you're looking for high intensity.

As to my confusion on how the intensity of a beam can scale with $N^2$ whereas the power can not (even when the beam stays the same size): I had lost sight of the second leaving the beamsplitter:

Imagine a 1W laser hitting a 50/50 beam splitter. Each side has a 0.5W output. Coherently combining a second 1W laser will result in a single 2W output and one "0W" output. So yes, from 0.5W to 2W is indeed a factor $N^2$, but no power was generated since this power was 'taken' from the other output. While the power of that specific beam increased by a factor $N^2$, the power of the system increased with only a factor N.

Not the answer you're looking for? Browse other questions tagged laser power coherence scaling or ask your own question.

6
Fiber optics with broadband, incoherent light
8
Wavefront RMS errors, mirror surface roughness and Gaussian beam scattering
2
In what applications are lasers necessary vs. just convenient?
3
What makes the radiation behind slits coherent?
0
Compare how much a coherent laser visible green light beam spreads out with a incoherent green light beam.
0
Would an incoherrent point source of light have any effect on a coherent
1
Is the spatial coherence of light a requirement for creating a well-collimated light beam?
4
Does putting an aperture in a laser beam make the smallest point it can be focused to larger or smaller?
5
Direct detection of the electric field of an electromagnetic wave from an oscillating dipole
1
Why are lasers more useful for cutting and similar tasks than non-coherent light?