Is it possible to noise cancel a sonic boom?

I having trouble understanding how a sonic boom works exactly. I know that it is done with sound waves and that ALL sound waves, at least on Earth, travel through a medium which effects it's speed. So when something travels at speeds higher than Mach 1, it becomes supersonic. Where I become confused is how waves are shown.

In noise cancellation, if you "reverse" the wave you can effectively make it out to 0 by sounding it over the other. However, the way I was shown sonic booms was that they are conal behind whatever object is travelling at supersonic speeds. This meaning that it's not so much a wave as much as it is a semicircle behind the object. This is where I'm lost. Is it still a wave? Furthermore, if it is a wave, why does it make a boom sound and does it have a decibel number? Can we measure the decibels?

All of this leads me to the question, is it possible to counteract, or cancel, the noise of a sonic boom?

I am sure the military are working on reducing the boom, as it has helped track planes that are otherwise undectable.

There is a rise in pressure at the nose, decreasing steadily to a negative pressure at the tail, followed by a sudden return to normal pressure after the object passes. This "overpressure profile" is known as an N-wave because of its shape. The "boom" is experienced when there is a sudden change in pressure; therefore, an N-wave causes two booms – one when the initial pressure-rise reaches an observer, and another when the pressure returns to normal. This leads to a distinctive "double boom" from a supersonic aircraft. When the aircraft is maneuvering, the pressure distribution changes into different forms, with a characteristic U-wave shape.

The sound is measured in perceived db, rather that the decibels ratings used to measure say a loudspeakers output. Sure, headphones or earplugs might diminish the sound for you, but until an effective suppression system is developed, the overpressure peak, will still follow the trail of the aircraft.

One method of suppression is to build a really long fuselage, but this is impractical, as most airports are not currently prepared for the turning circles and ground operations of such long bodied aircraft.

The measurement NASA researchers are using to base their work on is called perceived decibel level, or PLdB. Like comparing apples and oranges, PLdB is a different flavor of decibels than the measurement (dBA) often quoted when discussing how loud, for example, a rock concert is compared to a kitchen blender or library reading room.

Concorde's sonic boom noise level was 105 PLdB. The PLdB that researchers believe will be acceptable for unrestricted supersonic flight over land is 75, but NASA wants to eventually beat that and reach 70 PLdB. "For this phase of the research, we did succeed in reducing the perceived noise level. In fact, one of the designs reached as low as 79 PLdB,It was a really big step, but we still have some more work to do to reach our ultimate goal of about 70 PLdB." 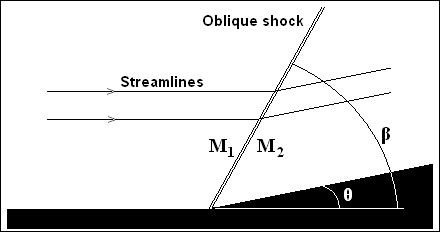 As you can see, in the limit as $\beta \rightarrow 90^{\circ}$, we approach the standard expected limit for a hydrodynamic shock. This is equivalent to looking at a shock produced by a piston/driver with a planar surface orthogonal to the incident flow.

The magnitude of the pressure ratio, or the overpressure, defines the strength of the sound wave of the sonic boom at the source. If we measure this in decibels, then we can see from the description at https://physics.stackexchange.com/a/266046/59023 that the intensity observed goes as: $$ L_{r}\left( r \right) = L_{i,src} + 20 \ \log_{10} \left( \frac{ 1 }{ r } \right) \tag{2} $$ where $L_{i,src}$ is the intensity level at the source and $r$ is the distance from the source. This is one of the reasons why one solution proposed is to fly a supersonic jet at higher altitudes (other reasons are outlined in the above linked answer relating to sound attenuation at altitude).

Is it still a wave?

Well, that's a little trick since a sonic boom is what your ear registers when a supersonic object passes by. It is the result of a shock wave, which is inappropriately named as I discussed at https://physics.stackexchange.com/a/136596/59023.

Furthermore, if it is a wave, why does it make a boom sound and does it have a decibel number?

The boom is a discontinuous pressure pulse (well, technically it's two, an over- and underpressure pulse). Yes, one can estimate the decibel level as I described above in Equation 2.

Can we measure the decibels?

All of this leads me to the question, is it possible to counteract, or cancel, the noise of a sonic boom?

Cancel, probably not. Reduce greatly, probably yes. One way is to change the shape of the nose cone of the jet, which alters the shock geometry (as I discussed above). For certain geometries, one can get a reduced pressure ratio (e.g., Equation 1) and thus, a smaller overpressure sound wave resulting in a "quieter" sonic boom.

The phase diagram image was taken from Wikipedia, courtesy of EMBaero - Own work, CC BY-SA 3.0, https://en.wikipedia.org/wiki/File:Obliqueshock.PNG

Not the answer you're looking for? Browse other questions tagged acoustics speed noise shock-waves or ask your own question.

11
What Exactly is a Shock Wave?
10
At what altitude would the air be too thin to carry a sound wave?
8
What are the properties of a sonic shock wave?
14
Intuitive explanation of supersonic flow behavior?
4
Nonlinear waves equations derivation from Navier-Stokes
2
Sonic Boom-Breaking the sound barrier
2
Supersonic wind tunnel with total pressure loss?
0
Can you break the sound barrier without creating a loud bang?
0
How loud would a sonic boom that occurs at 60,000 (and 85,000 and 35,000) ft altitude be to observers at sea level?