Skydiving without a parachute or a wingsuit?

Recently I heard that a skydiver plummets 7600 meters onto a 30m$\times$30m net without a parachute or a wingsuit. I searched online and found a post, which said that a wingsuit is necessary. I have no idea about these technical terms and formulae. However, in this piece of news, no wingsuit but a net. I wonder how it's possible to

This article discusses the actual phenomenon - the preparation, and a bit about the steering - that yes it was done with only a fairly normal looking suit without sails, although an oxygen mask was uses at first.

Here's a plot of a ballpark estimation of the trajectory, the math and a short Python script is included below. I adjusted the numbers a bit, estimating the time as 2min 8sec, neglecting the landing wasn't at sea level. 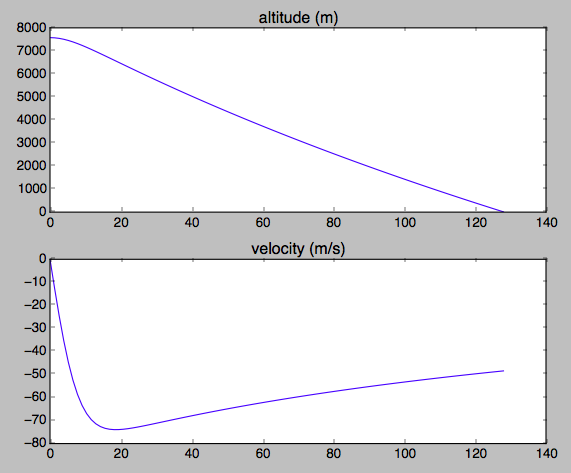 In a short pre-dive interview snipped shown in the video now linked in the article (thanks @K7PEH for the updated info) the diver says that at 25,000 feet he will be falling at about 150 mph (about 240kph, 67 m/s) and near the end where the air is thicker, 120 mph (about 190kph, 54 m/s). The scale height (change in altitude for a $\frac{1}{e}$ change of pressure) of the lower atmosphere is roughly 7600 m (it varies with local temperature) and the density roughly tracks that as well. 25,000 feet is also about 7600 m, that explains the oxygen mask in the beginning.

Wikipedia says that a skydiver in this orientation will reach a terminal velocity of about 200 kph (about 56 m/s).

If the person's mass is 75 kg and they are at terminal velocity, then the gravitational force

will equal the aerodynamic drag force which can be approximated as

once terminal velocity is reached (no further acceleration) I get a $C_D$ of 0.58, similar to the value of 0.5 used here.

Since it seems to have happened, it seems to be possible. Extensive preparation by trained and experienced people were needed.

If you watch the original Youtube video posted on July 30th, 2016 you would watch the entire 2 minute free-fall and the final landing in the net. Unfortunately, early this morning (July 31st, PDT), the Youtube video is blocked with copyright infringement.

However, there are other videos available if you search and I found one at: Sky Diver video

The article associated with the link describes how this one done using guidance indicators and of course the skill of the sky diver.

Not the answer you're looking for? Browse other questions tagged classical-mechanics aerodynamics popular-science or ask your own question.

2
Is it possible to sky dive without a parachute and land safely?

2
What would be an appropiate shape for a parachute?
0
Parachute jumping (high altitude)
2
Is it possible to sky dive without a parachute and land safely?
1
Experiment - Measuring final velocity of a parachute
1
What are the major differences in group-skydiving as opposed to “single” skydiving?
0
Why does a parachute bounce back?
0
Relation between the hole in a semispherical parachute and the area of the parachute and drag coefficient of such parachutes
0
Is the parachute using stall drag to reduce the descent speed?