Is it possible to for the mechanical workings of a watch to be changed such that it ends up showing Mars time?

Is the answer same for both a quartz and a mechanical watch?

Based on CuriousOne's comments, and on Timekeeping on Mars

A convention used by spacecraft lander projects to date has been to keep track of local solar time using a 24-hour "Mars clock" on which the hours, minutes and seconds are 2.7% longer than their standard (Earth) durations. For the Mars Pathfinder, Mars Exploration Rover, Phoenix, and Mars Science Laboratory missions, the operations team has worked on "Mars time", with a work schedule synchronized to the local time at the landing site on Mars, rather than the Earth day. This results in the crew's schedule sliding approximately 40 minutes later in Earth time each day. Wristwatches calibrated in Martian time, rather than Earth time, were used by many of the MER team members.

With of the quartz clock, you could adjust the stepping motor to coincide with the length of a Martian day. 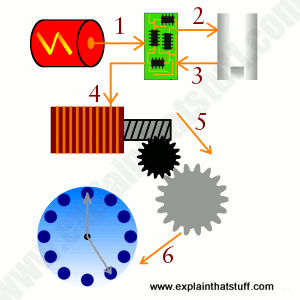 For mechanical clocks, again, as suggested above, an alteration in the gearing could allow for Martian day lengths.

Not the answer you're looking for? Browse other questions tagged planets oscillators time or ask your own question.

16
Relationship between Mars and Earth rotation
4
Link between Earth and Mars
3
Mars Circular Intercept Orbit
2
How will hovercraft work on Mars?
6
How can a mechanical clock tick slower due to time dilation?