What does a physical surface look like at a subatomic level?

At the macroscopic level, we are all quite familiar with the concept of a physical surface.

In mathematics, a surface is a geometrical shape that resembles to a deformed plane. The most familiar examples arise as boundaries of solid objects in ordinary three-dimensional Euclidean space ...

The concept of a "boundary of a solid object" becomes quite hazy at a subatomic level - so can anyone explain how we would define a physical surface at that scale ?

For my understanding, perhaps it would be best if someone could unpack the following scenario in terms of the fundamental interactions:

A hammer strikes the head of a nail and drives it into a block of wood.

I found this explanation which satisfies me partially - but that isn't the whole picture:

Subatomic particles don't collide in the same way as macroscopic objects like billiard balls: they do not literally touch one another. Instead, as two subatomic particles approach one another they exchange force-carrying bosons (photons, gluons, W or Z particles) with each other. This is what enables them to interact and scatter off of one another. ~ Elizabeth H. Simmons, Particle Theorist, Dean, and Physics Professor at Michigan State University

What I am trying to understand exactly is:

What do the surfaces of the hammer and nail head look like at this level? 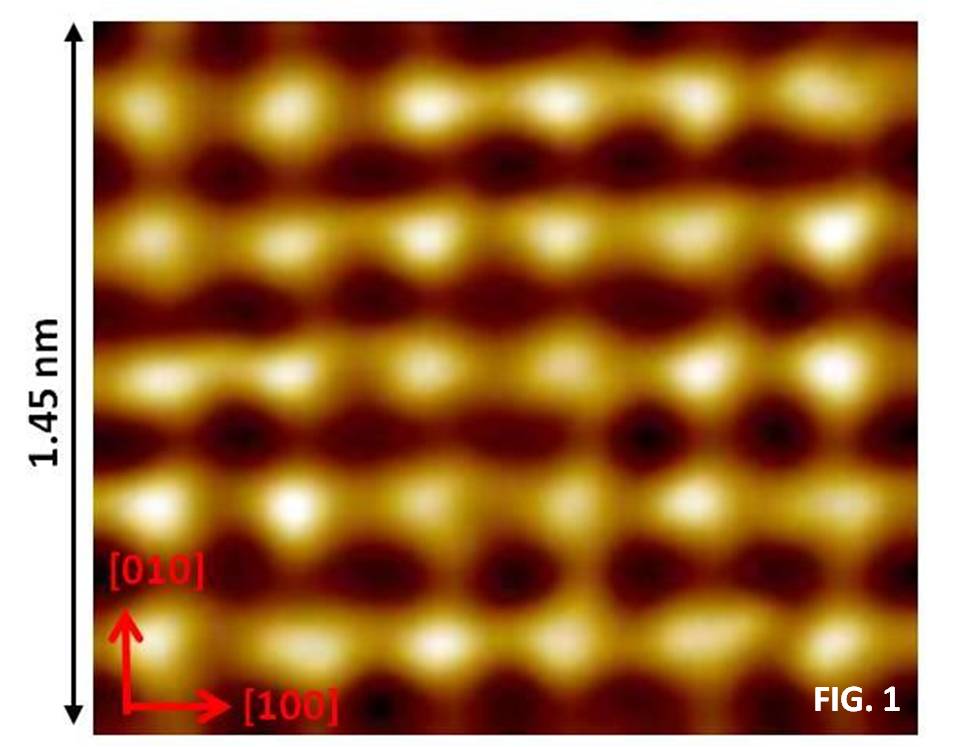 In your post title, you ask for details at the subatomic level, which I don't think anybody can provide you with.

So I have cheated a bit, and displayed a Scanning Tunnelling Microscope Image at the atomic level, which may be on the scale of the best image we can currently obtain.

What I find interesting about this image, is that is corresponds exactly with what we would expect to see classicaly, all nicely lined up and ordered neatly.

I would doubt that the subatomic level is even possibe to visualise, in other words, an electron is supposed to be an point shaped particle, that takes a 720 degree rotation to get back to its starting point, I have no idea how to visualize that.

The nearest image I can provide you with, where quantum effects start to come into play, is the one below. 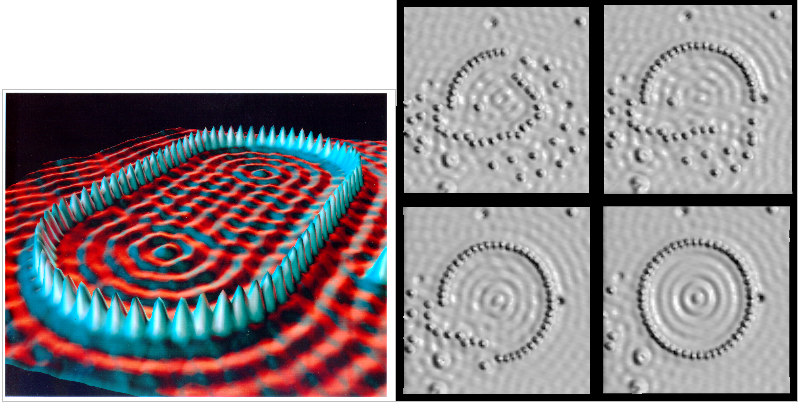 The concept of wave-like motion for electrons has been very difficult to imagine or visualize. What does it mean for a particle to move like a wave? But we can visualize it. Very recently, scanning tunneling microscopy (STM) has been used to take images that clearly reveal this wave-like character. The STM mechanism can be used to literally pick up and place metal atoms in specific arrangements on metal surfaces. For example, iron atoms have been arranged to form a closed circle on a copper surface. An image of the resultant structure then taken using the STM shows not only the ring of iron atoms but also conspicuous waves inside the ring, which result from the motion of electrons moving within the ring and reflecting off of the walls formed by the iron atoms. Two of the original images taken at IBM of these so-called “quantum corrals” are shown below.

This Wikipedia STM article explains the details of the STM, and how it uses the the quantum tunnelling effect to display an image, not of the atoms themselves, but of the electric charge surrounding them.

Any corrections / clarifications to the above statement will be welcomed.

Are they well defined boundaries, or are they "clouds of subatomic particles" that interact or are exchanged at a certain proximity ?

On a subatomic scale, they are not well defined boundaries, and I am pretty certain we cannot visually image an electron, all we can do as in the above images, is produce an image based on the indirect effects of their electric charge on our instruments.

As far as proximity relates to interactions, you should read this Overlapping Orbitals post and the comment by CuriousOne below it, on the factors that influence whether an interaction will occur or not.

How exactly is the momentum transferred from the hammer to the nail?

By exactly the same method as we are able to walk across on a floor, that is the electrical repulsion of similar negative charges, as the electrons repel (or attract) each other by momentum exchange mediated by photons.

QED, our theory of how particles and forces interact, is well summarised by Wikipedia.

The term surface may be not applicable to this level. As surface is just some our approximation. We see something which looks like continous surface, but, really, that is some kind of the grid with very small nodes.

Not the answer you're looking for? Browse other questions tagged particle-physics interactions subatomic or ask your own question.

1
Is there scattering event if two wave functions overlap in momentum space?

5
What is a particle?
0
What does temperature look like at the subatomic level?
62
What does antimatter look like?
6
How bad would it break physics if dark matter was not “particles”?
1
What is the specific photon-particle interaction by which momentum is transferred in radiation pressure?
1
What does QCD look like in higher dimensions?