If the strong nuclear force is stronger than electrostatic repulsion, why don't nuclei collapse into a point?

When asked about the relative strength of the two forces in question, she said that "The strong nuclear force is the strongest force of nature, and is infinitely stronger than the repulsion force between the protons". Now, if that were true, how would the atom remain in equilibrium, because if I'm correct, Equilibrium is achieved when the net force on a body is zero. However, in this situation, that doesn't seem to be the case. Could someone elaborate on this apparent contradiction?

First, the strong force acts on scales where our classical idea of forces as something that obeys Newton's laws breaks down anyway. The proper description of the strong force is as a quantum field theory. On the level of quarks, this is a theory of gluons, but on scales of the nucleus, only a "residual strong force", the nuclear force remains, which can be thought of as being effectively mediated by pions.

Now, a force mediated by pions is very different from one mediated by photons, for the simple reason that pions are massive. Massive forces do not, in their classical limit, follow a pure inverse square law, but yield the more general Yukawa potential, which goes as $\propto \frac{\mathrm{e}^{-mr}}{r^2}$ where $m$ is the mass of the mediating particle. That is, massive forces fall off far faster than electromagnetism.

So this makes it already difficult to tell what the "strength" of a force exactly is - it depends on the scale you are looking at, as Wikipedia's table for the strengths of the fundamental forces rightly acknowledges. However, in no sense is the strong force "infinitely stronger" than the electromagnetic force - it is simply much stronger than it, sufficient to keep nuclei together against electromagnetic repulsion.

Now, the person who said that it is "infinitely stronger" might have had something different in mind which is not actually related to the strength of the force but to its fundamentally quantum mechanical nature: Confinement, the phenomenon that particles charged under the fundamental (not the residual) strong force cannot freely exist in nature. When you try - electromagnetically or otherwise - to separate two quarks bound by the strong force, then you will never get two free quarks. The force between these two quarks stays constant with increasing distance, it does not obey an inverse square law at all, and in particular the energy to being on of the two quarks to infinity is not finite. At some point, when you have invested enough energy, there will be a spontaneous creation of a new quark-antiquark pair and you will end up with two bound quark systems, but no free quark. In this sense, one might say that the strong force is "infinitely stronger", but crucially this is not the aspect of the strong force that keeps nuclei together; the theory of pions shows no confinement.

In nuclear physics it makes more sense to talk about energy than it does to talk about force. The two concepts are closely related. Two protons separated by a distance $r$ have an "electrical" interaction energy $$ U_E = +\alpha\frac{\hbar c}{r}. $$ Here $\hbar c = 200\rm\,MeV\,fm$ relates distance and energy. The fine structure constant, $\alpha \approx 0.0073 \approx 1/137$, represents the strength of the electrical interaction. The positive sign, and the $r$ on the bottom, mean that bringing two protons closer together stores energy in the electric field between them. If you find yourself with two protons at rest some distance apart, they'll tend to evolve to reduce the energy stored in the electric field by moving yet further apart; this is the sense in which the electric interaction is repulsive.

The electric field isn't the only place where interacting protons can store energy. There is also the pion field, whose interaction energy is given by a Yukawa potential, $$ U_\pi = -\alpha_\pi \frac{\hbar c}r \times e^{-m_\pi r}. $$ This is mostly the same as the electrical potential, but the differences are important:

These differences address a little of your confusion. The strong interaction is much stronger than electromagnetism, but not infinitely stronger. But your title question still remains: why doesn't the nucleus collapse exactly to a point? That's because we still haven't exhausted the forest of different ways that two protons can store energy. The next two that are important are the rho and omega fields, \begin{align} U_\rho &= +\alpha_\rho \frac{\hbar c}r \times e^{-m_\rho r}, \\ U_\omega &= +\alpha_\omega \frac{\hbar c}r \times e^{-m_\omega r}. \end{align}

Like the pion field, these meson interactions "turn off" when the nuclei separate from each other, but the distances are shorter than for the pion because the masses are larger. So the interaction between two protons has at least three different regions:

Here's a plot using the potentials we've discussed so far: 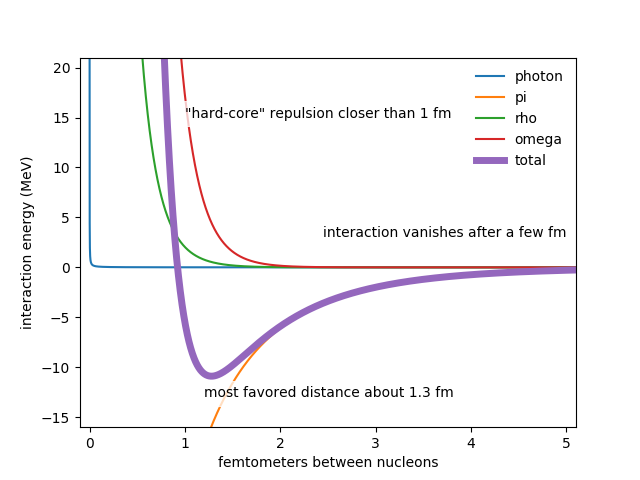 Not the answer you're looking for? Browse other questions tagged electromagnetism forces nuclear-physics interactions strong-force or ask your own question.

7
Does the weak force have an attractive/repulsive force observable in everyday life like the other forces?
2
Relative size of electrons and quarks
0
How can the strong force, which is conservative, not follow the inverse square law?
1
What $r_0 $ in the nucleus radius equation?
1
In QFT, are forces made out of multiple fields?
0
Quick question about gluons
0
Is it true that *free* nucleons don't interact with each other while they do in matter (nucleus, nuclear matter, neutron stars, etc.)
1
Why do we observe the nuclear force only in scatterings and decays?

14
What do we know about the interactions between the protons and neutrons in a nucleus?
2
Electrostatic force has longer range than strong nuclear force?
0
In nuclear fission, how does the strong force get dominated by the electrostatic repulsive force?
0
How large would a nucleus have to be for the gravitational force overcome the electrical repulsion?
6
Can a nucleus (made of neutrons) exist without an EM field?
1
formation of atomic nuclei from nucleons
1
Strong nuclear force vs electrostatic repulsion between protons