Why do magnetic coils consist of many thin wires?

Magnetic coils are usually made of thin wire turned into spring shape:

Magnetic field which is generated by this solenoid is proportional to the number of turns N.

But why? What changes if we melt all wires together and make copper tube? Of course we will need a gap. But finally we'll get coil with 1 turn of very thick wire. 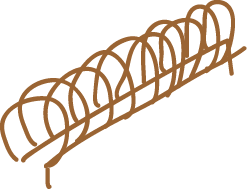 Will such coil generate smaller magnetic field with the same current? And if yes, then why?

But why is it possible to avoid the nesessity of bigger current by just splitting wire into thin channels and looping? Why does this trick work?

The question IS: why do we prefer case (1)? Why is it easier to run electrons in serial connection? Why isn't these devices just technically equivalent?

Suppose, we have one "sick" turn, which has resistance of

If we connect the voltage $U$ to it, then we'll get current of

Magnetic effects are proportional to (1) current and (2) number of turns, because effects of all turns sum to each other (approximately).

So, we wish to keep the product $NI$ constant

Suppose we split the wire into $N$ turns, remaining the total cross-section of copper the same.

The resistance of each turn will be

because it's cross section is now Nth part of total initial cross-section and $1/R$ is proportional to cross-section.

The total resistance of the coil will be

because turns are connected in series. I.e. current should pass thinner wire and longer length of this wire.

In other words, to have $J=J_0$ we should power our coil with

and we will have current of

This obviously means, that the more turns we have, the higher voltage should be applied. Hence, the less turns the coil has, the better magnetic properties it has.

Then why use coils with many turns?

If you have a single tube, the current will flow on it directly without making the $N$ loops. It will result

Having the loops, the magnetic fields created by the induvidual loops is added. Actually, you have "the same current" using $N$ times to produce the field.

If you don't have the loops, you need to multiply the current in the wire, which is in most cases impractical:

CuriousOne's comment has it exactly. Maybe some elaboration is in order, though.

I'm only going to cover the DC case -- as CuriousOne points out, when you move to AC inductive effects enter the picture.

Thinking of the coil as a fused cylinder of fixed shape is an excellent mental move for understanding the problem. No matter how you slice up the cylinder physically, the magnetic field it generates is the sum of the magnetic fields generated by each local part of the cylinder. That is, whether made up of a long thin wire or a short thick wire, the magnetic field produced is determined only by its overall shape and the density of current $\vec J$ everywhere in it.

What does care about how you slice up the cylinder is the current you have to push through the wire -- that's the current density times the cross-sectional area of the wire, and so the current is lower if you use a thinner wire. You can think of it as making the same current work harder for you by having it go around more times.

Note that you don't get something for nothing -- if you make the wire thinner, you also have to make it longer to fill up your cylinder. (The product of the cross-sectional area and the length is the fixed volume of the cylinder.) So what happens is the voltage drop in the wire goes up as the current goes down, and in fact their product, which is the resistive power loss in the coil, is fixed. (You can get that last fact directly -- the power density is $\rho J^2$, where $\rho$ is the resistivity of the metal, and so once you fix the current density you fix the resistive loss.)

This brings us to why we choose a long thin wire instead of a short thick one. You want to deliver current to your coil at a practical current and voltage -- for example, a 9V battery can comfortably deliver 100 mA, which implies a resistance of 90 Ohms. But your wire is probably made up of some good conductor like copper, so it needs to be quite long and thin to have a resistance like that.

I have seen the answers and your edit of question. It is not the serial or parallel connection of the wire that matters, both your coils will generate same magnetic field if the number of turns are same and current flown (in each turn) is same.

where N is the number of turns per unit length

Now comes the low current-large number vs high current-low number mode. Both cases are used practically and it depends on your design. If you want to generate high magnetic field by adding larger numbers of turns then you have to make your wire thinner (to the size of magnet). This increases the resistance in the wire and in turn increases the heating of wire. Heating of the wire will result in removal of the insulation over it and then your magnate will fail. Hence there is a rated current over which there is always a probability of the failure of magnet. It may also be noted that the stacking of loops one over the above poses difficulty in heat removal from magnet, which will further reduce the maximum current rating of the magnet.

If you can generate larger currents ($>100$ or $1000$ Amps) it is always preferable to use thicker wires. The wires of section >1 $cm^2$ are often used to generate large magnetic field for large size magnet, because these wires have less resistance and can have center hole for cooling. You can generate much larger magnetic field by flowing chilled low conductivity water from within the wire. It may be noted here that as the size of the magnet increases so is the length of wire per turn, which also increases the resistance i.e. more heating for same current. The question here is not the power consumption but the generation of maximum magnetic field.

I hope this will help you clarify your doubts

As you have noticed, this is a serial vs. parallel problem. We can look at the equation for a magnetic field in such a winding, $B=\frac{NI\mu}{L}$ where B is the magnetic field generated, N is the number of loops, I is the current going through each loop, and L is the length of the circuit through the center of the magnet. We see clearly that N is important, as you noticed. The higher N is, the better. However, we also see that I is important, and I is the current going through each loop.

In the serial case, the current goes through every loop, so I is equal to the current going into the magnet. In your parallel case, I is divided "equally" between each of the loops. This means that your circuit must have dramatically higher quantities of current going into it to generate the same magnetic field. If you have a 100 loop winding, yours will require 100x higher currents to operate.

There's two reasons we don't make them this way. First is that we're very good at making wire, so it's cheap and easy to manufacture this device. The second is resistive losses. Resistive losses in wires is proportional to the square of the current ($P=I^2R$). Now each of your loops has the same current as it does in the normal winding case, so those losses are the same. However, your bus has far more current than anything we see in a normal electromagnet, so the resistive losses in that bus will be great. The only way to solve this is to decrease the resistance of the bus dramatically, and that calls for a huge expensive piece of copper. Copper may not even be viable on the sizes you need, so it may be that you have to switch to more exotic materials.

You would also have a huge propagation problem. Your system requires all of the coils to have the same resistance. Any which have higher resistance receive less current, effectively decreasing the number of windings you have. In a typical wire-wound approach, all such a coil would do is increase the total resistence of the system so that we have to apply more voltage to arrive at the same current.

I'd have to ballpark figures, but I'd expect that, for \$100,000, you could build a device with your design which fares comparably against a \$20 wire-wound electromagnet. Thus, the answer to your question: economics.

At high power levels, you do see interesting alternatives, such as having multiple independent parallel windings. However, these are seen as tradeoffs to be paid in order to get different performance characteristics. For example, driving a serial winding with a large number of windings may call for a high enough voltage to start causing arcing. In this case, having 2 or 3 windings in parallel may keep the risk of arcing low at the expense of having to balance the windings to make sure they have the same resistence.

Not the answer you're looking for? Browse other questions tagged electromagnetism inductance or ask your own question.

4
Relationship between inductance and number of turns in a coil in loudspeaker
1
Will the way you make a coil affect magnetic induction?
0
Inductor in transformer
2
why does adding loops in a straight wire increase the magnetic field?
1
If inductive reactance increases with frequency why do tesla coils have coils?
0
How does the temperature of the coil in a simple motor affects its rotational speed?
2
How resistance in coils affects the damping of oscillations of a magnet through them