Do all massive bodies emit Hawking or Unruh radiation?

It is known that any accelerated observer is subject to a heat bath due to Unruh radiation. The principle of equivalence suggests that any stationary observer on the surface of a massive body should also experience heat bath. Indeed by substituting surface gravity g into the formula for Unruh radiation one can find the black body temperature for a hypothetical hyper-cool planet:

Since the heat in the super-cold Earth cannot come out of nothing one should assume that it will come from decay of particles due to a certain mechanism.

Sometimes I heared an argument that an event horizon is needed for Hawking radiation to exist. But this can be countered by assumption of possibility of decay due to quantum virtual black holes (which inevitably should appear due to uncertainty principle, and the more massive and dense body is the greather concentration of virtual black holes inside it will be, eventually becoming similar to the concentration of bobbles inside a body of boiling water). Or just suggest that any massive body due to uncertainty principle can quantum tunnel into a black hole state so to emit Hawking radiation.

So what is the conclusion here?

This is a weaker preposition: thermal state of surrounding vacuum does not mean energy transfer if the system is in thermodynamic equilibrium.

This is a stronger preposition and suggests emission of radiation al loss of mass.

There's a simple argument that massive bodies that are not black holes cannot emit Hawking radiation. Consider a single proton in its ground state. It does not emit radiation because if it were, it would have to decay to some lower-energy state. This eventually may happen when the proton decays, but the radiation is not black-body radiation, so it can't be considered Hawking radiation.

Now, let's consider a very large crystal of diamond1 in its lowest-energy state. Similarly, it cannot emit any radiation until one of its protons decays2, in which case it will probably emit some high-energy gamma rays. So any radiation it is emitting is not black-body Hawking radiation.

1Note for pedants: The comments point out that diamond is only stable at high pressures. So feel free to replace it with a silicon crystal.

2Note: Proton decay isn't part of the Standard Model, but lots of physicists think quantum gravity is going to require proton decay exists, because in many theories of gravity, black holes don't preserve baryon and lepton number. If this is the case, Planck-scale interactions should violate baryon number conservation. (Also, many Grand Unified Theories lead to proton decay, although for some of these, the experimental limits on proton decay rule them out.)

The answer is clearly no, but it is interesting to see what goes wrong with the argument. I think the problems lies in the distinction between Unruh’s effect and Hawking’s. In Unruh’s case one has to be careful what is and what is not implied: an accelerated detector in empty flat space will behave as if immersed in a heat bath, in that it detects particles distributed thermally. However, this does not imply there is radiation, in the sense of energy flow from one place to another, empty space is empty, even in Rindler coordinates. It is only for a real black hole that you have real radiation emanating from the horizon.

(I vaguely remember a decent discussion of this in Birrell and Davies).

The answer is no, because there is no horizon. A time-independent gravitational field emits no particles, because energy is conserved, just like a stationary charge distribution does not radiate. This is consistent with the equivalence principle, as explained below.

In the Unruh effect, the particle emmission is from the "black wall" acceleration horizon behind the observer. If you place a refrigerated baffle between the black wall and the observer, the radiation will be absorbed by the baffle, and will not be seen by the observer. An observer standing on a planet is indistinguishable from an accelerating observer with a planet between him and the acceleration horizon, and such an observer sees no emissions from the horizon, because the horizon is invisible.

You might object that the horizon is infinite, and the planet is finite, so shouldn't you be able to see the horizon far enough out? But if you go far enough out, you notice the curvature caused by the planet, and this will push the horizon out to infinity, because there is no horizon after all, you're just standing on a planet.

My previous answer is beside the point now that the question has been edited. There is a simpler example of a question of this type which has been analyzed in great detail in the literature, and that involves an electric charge which is stationary in a gravitational field. Since the power radiated is nonzero if a charge is accelerated one might, by the equivalence principle, expect such a charge to radiate. I believe the answer is that it does not, but that the analysis is subtle. You could start with the article D. Boulware, "Radiation from a uniformly accelerated charge", Annals of Physics 124 (1980), 169-187 and work your way forward from there by looking at citations of that paper.

I would think that you can have some evaporation for massive objects without horizons. The usual way to think of black hole evaporation (see wikipedia) is that you get spontaneous particle pair creation near the horizon. Then particle '1' get sucked in and particle '2' escapes the black hole. Energy in total is conserved, so the black hole loses mass.

Now think of this planet. We have no horizon, but we do have a gravitational field. So when a spontaneous pair gets created (say outside the atmosphere), there is a (hyper small) chance that one will get sucked into the planet, while the other flies free, lowering the mass of the earth. I think that this is what you are talking about with your 'virtual black holes'.

So what would be the rate? Perhaps less than one particle per lifetime of the universe. The type of particle involved may also need to have special properties, e.g.: be extremely heavy/light and be charge free.

The Unruh effect can be calculated by a lot of ways. But all this calculations make the same assumption (should be), but in different ways: some of this assumptions can be very unclear by some calculations. One of those assumptions that are hidden by the usual calculations are this: the vacuum state is a non-local state in the sense that any local observable fluctuates after a measurement. In other words, the projector $|0\rangle\langle 0|$ do not commute with $\phi(x)$.

Note that the derivation of the Unruh effect are based on QFT on flat Minkowski space-time. Accelerated observers in a Minkowski space-time are described by the Rindler coordinates. And you can see that in these coordinates we have a horizon. Then this observer can't see an entirely spacelike hypersurface. In other words, he can't access the entire Hilbert space of the system. This is why he describe the vacuum state of the inertial frame as mixed state described by a proper density matrix $\rho$.

To get a picture of "what is going on": 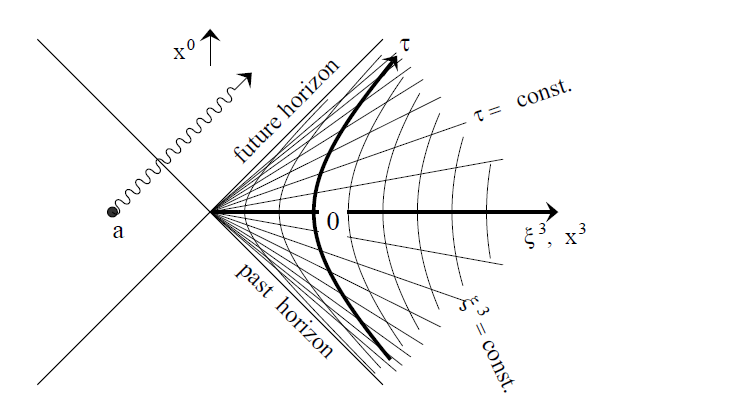 The Unruh effect is due the fact that the vacuum state correlates all the space-time $\langle\phi(x)\phi(y)\rangle\neq 0$, and this interval $(x,\,y)$ can cross the horizons. Integrating out the field at points that do not belongs to the Rindler region create an thermal radiation on this region.

Now let answer your question: No. Thermal radiation only show up when the horizon show up too. Explain this is simple: Unruh effect happens because the horizon. The traditional calculation with Bogoliubov transformation don't make this clear but is there, hidden in the middle of the calculations. So the Unruh effect is non-local because depend on the assumption about the existence of an horizon.

In a star or in a black hole the Riddler coordinates are good only locally, is a polynomial expansion over the radius. We can do this expansion through all the shells around the object. When we make this expansion more and more close to the object the acceleration increase and the horizon get closer. After you pass through to the interior of the star the acceleration start to fall down make the horizon far and far until you reach the center of the star. In the black hole we don't have any interior to save us from the horizon because the horizon came first of any possible interior.

For more about the Unruh effect see this article.

As the question is currently phrased, the answer is a straightforward one. Hawking radiation does not occur with any object except one with a horizon, i.e. a black hole. The arguments leading to Hawking radiation are subtle, but, conceptually, the idea (via Susskind in The Black Hole War) is that quantum jitters become thermal jitters at the event horizon. (Susskind's explanation is much better, of course.)

To be a bit more complete and concrete, consider a standard quantum fluctuation of energy arising from the uncertainty relation between energy and time. Fluctuations on sufficiently small time scales will be large enough to result in particle-antiparticle pair creation. At the horizon of a black hole, the pair can be separated so that one particle falls into the black hole, while the other is shot out. This transforms a virtual particle (pair) into a real particle, which is then able to interact with other matter.

Now, one could say that this process is possible in any system with non-zero mass. However, the detailed and subtle mathematics of the process require an event horizon in order to occur. As a thought experiment, imagine that any mass could produce this effect. It would result in a wide-scale violation of the Uncertainty Principle because we would see changes in energy that exceeded those allowable over the associated time frame.

One other objection is that black hole temperature, which is tied to Hawking radiation, increases as the mass of the black hole decreases. If "normal" mass were to behave in a similar way, elementary particles would have tremendous "black-hole-like" temperatures.

Not the answer you're looking for? Browse other questions tagged thermodynamics black-holes hawking-radiation pair-production unruh-effect or ask your own question.