Why does solid turn to liquid deep in the Earth? [duplicate]

Usually pressure decreases inter-molecular movement thereby keeping the substance in solid state. Given this, why do the earth's crust and mantle, which are both solid, turn into a liquid outer core, despite the enormous pressure deep down in the Earth?

From Starts With A Bang:

The Earth has a liquid outer core, a solid mantle exterior to that, and a solid core interior to it! So that’s how come the Earth has the heaviest, densest elements at its core, and how we know its outer core is a liquid layer.

[...] Like all elements, whether iron is solid, liquid, gas or “other” depends on both the pressure and temperature of the iron.

Iron, however, is much more complicated than many elements you may be used to. Sure, it can take on a variety of crystalline solid phases, as shown above, but we’re not interested in these normal pressures, shown in the diagram above. We’re going all the way down into the core of the Earth, where the pressure is millions of times what it is at sea level. 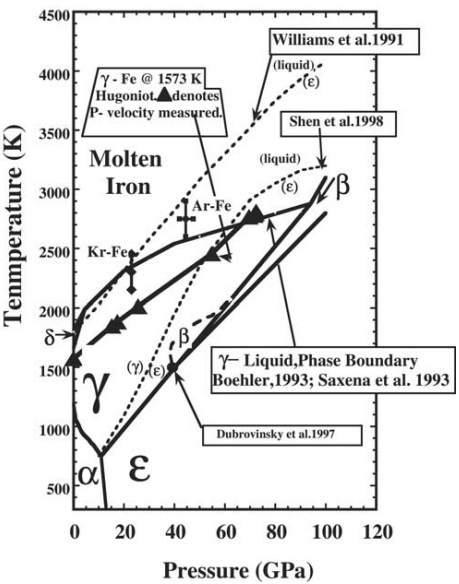 While this diagram shows tremendous pressures — up to 120 GigaPascals, while the inner core experiences pressures of an estimated 330-360 Gpa. The upper solid line represents the boundary between molten iron (above) and solid iron (below).

At 330 GigaPascals, it takes a tremendous temperature, something comparable to those found at the surface of the Sun, to melt iron. Those same temperatures, however, at lower pressures, will easily keep iron in its liquid phase, while at higher pressures will see iron form a solid.

It means that, as the Earth cools over time, its interior temperature drops, while its pressure remains constant. In other words, when the Earth first formed, it’s very likely that the entire core was liquid, and as it continues to cool, the inner core continues to grow! And as this happens, because solid iron has a higher density than liquid iron, the Earth will contract slightly

As you go deeper in the Earth both temperature and pressure increases. Although the inner core is very hot, it is solid because it is experiencing very high pressure. The pressure in the outer core is not high enough to make it solid.

A required edit as pointed by Rob Jeffries:

The mantle is predominantly solid but in geological time it behaves as a very viscous fluid. The mantle encloses the hot core rich in iron and nickel, which makes up about 15% of Earth's volume.

And more from Universe Today:

And this bit from various sources:

The mantle is made up of semi-molten rock called magma. In the upper parts of the mantle the rock is hard , but lower down the rock is soft and beginning to melt

Short answer: the changing composition between silicate-rich mantle and iron-rich core means the melting temperature does not increase sufficiently for the iron/nickel outer core to remain solid.

The ability of something to solidify is a competition between the potential energy associated with the atoms that would occupy a solid lattice versus the thermal energy that moves them around.

A general way of thinking about this is to compare the Coulomb energy associated with a particular solid form with $kT$. If this exceeds some value then the liquid form will solidify.

The numerator of this ratio depends mostly on the density of the substance, but it also depends a lot on the composition, while the denominator depends only on temperature. Thus high densities favour solids, but high temperatures favour liquids. But we also know that refractory compounds involving silicon, magnesium, aluminium etc. have higher melting temperatures than pure metals for instance and the composition of material in the Earth's interior varies drastically with depth.

In the mantle, both densities and temperatures are lower than the core, but the material is rich in silicates. The densities are then high enough to almost solidify the material. Heavier elements sink during the formation of the Earth, so the core is mainly iron and nickel (heavier elements are much less abundant).

I think this is the main answer to your question. The core composition has a lower melting point at the same density, and even though the density gets higher in the outer core, the temperature is sufficiently large to melt iron. In the inner core the density increases again by factors of 100, but the temperature only increases a little, and the iron is able to crystallise.

To understand why the temperature and density behave in this way requires an understanding of the equation of state relating pressure to density and temperature. Hydrostatic equilibrium - the balance between local gravity and the pressure gradient at that point - demands there must be an increasing pressure with depth.

A simple example: Water turns into vapor at ca. 100°C at ambient pressure, but does so at room temperature (ca. 20°C) if the pressure is low enough. So if you want to know more, you need to look at the whole phase diagrams of the specific substances at hand.

Slight radioactivity inside the earth continues to produce heat - and given the size of the earth, this heat cannot easily get out. As a result, the deeper parts of the earth are very, very hot (think volcanoes) - and most phase diagrams will tell you that at sufficiently high temperatures, most things are liquid. Entropy favors it.

Not the answer you're looking for? Browse other questions tagged earth phase-transition geophysics states-of-matter or ask your own question.

60
Why has Earth's core not become solid?
21
Why does water ($\mathrm{H_2O}$) only have two distinct fluid phases?

4
How does the inner core relieve stress as the Earth's rotation slows?
10
Is the liquid/solid line infinite?
4
Does the Earth have a semi-solid body at its core because of lower pressure at the center of the Earth?
4
Can you both supercool and superheat a substance simultaneously?
9
Why doesn't the heat of the Earth's core diffuse to the surface?
0
Why Earth’s crust is max 100 kms wheras Moon and Mars have much thicker ones?
1
Does the inner core of the Earth drop?