Proving that the Boltzmann entropy is equal to the thermodynamic entropy

I've been trying to understand how we can equate the Boltzmann entropy $k_B \ln \Omega$ and the entropy from thermodynamics. I'm following the approach found in the first chapter in Pathria's statistical mechanics, and in many other texts. Many other questions on stackexchange come close to addressing this problem, but I don't think any of the answers get at my specific question.

So, we're considering two isolated systems 1 and 2, which are brought into thermal contact and allowed to exchange energy (let's assume for simplicity that they can only exchange energy). On the thermodynamic side of the problem, we have the necessary and sufficient condition for thermal equilibrium

where the temperatures $T_1$ and $T_2$, the internal energies $E_1$ and $E_2$, and the entropies $S_1$ and $S_2$ are all defined appropriately in operational, thermodynamic terms. On the other hand, we can show that the necessary and sufficient condition for equilibrium from the standpoint of statistical mechanics is given by

Here, $\Omega_1$ and $\Omega_2$ are the number of microstates associated with the macrostate of each system. Now, since both of these relations are necessary and sufficient for equilibrium, one equality holds if and only if the other also holds. My question is: How can we proceed from here to show that $S=k_B \ln \Omega$, without limiting our scope to specific examples (like an ideal gas)? In Pathria's text and in other treatments, I don't see much explanation for how this step is justified.

My possibly wrong thoughts are: It seems like we first need to show that $\beta$ is a function of $T$ alone (and indeed the same function of $T$ for both systems), and then show that the form of this function is in fact $\beta \propto T^{-1}$. But I'm not sure how to prove either of those claims.

As discussed in the comments, your proof needs to show that: $$ \beta = \frac{1}{kT} $$ Following Gaskell's "Introduction to Thermodynamics", I think that this is a definition. The rationale comes from looking at $\beta$ as a parameter which controls the shape of the distribution of the Boltzmann distribution of energy among particles: $$ n_{i}=\frac{ne^{-\beta E_i}}{P} $$ where $n$ is the total number of particles, $E_i$ is the $i^{th}$ energy level, and $n_i$ is the occupation of the $i^{th}$ energy level, and $P$ is the partition function.

Having $\beta$ and $T$ inversely proportional makes sense because, as the plot of occupation vs energy below shows, you would expect the higher energy states to become more occupied when the temperature is raised. This happens when beta is lowered. 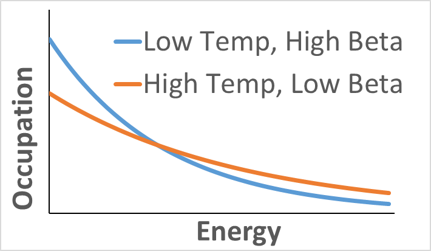 Not the answer you're looking for? Browse other questions tagged thermodynamics statistical-mechanics temperature entropy or ask your own question.

32
What is entropy really?
1
Why is Boltzmann entropy equation used for configurational entropy?

19
Thermodynamic equilibrium - will the piston move?
3
Why is temperature defined like this?
2
On the derivation of the canonical distribution
2
Can entropy be intensive?
0
I reasoned that if $T_2 > T_1$ then $E_1>E_2$. Obviously this can't be right, what is the flaw in my logic?
0
Temperature from the Gibbs entropy
2
Does the postulate of equal a priori probability apply only to equilibrium states or to all states satisfying the constraints?
0
Applying the Clausius Inequality to Three Systems