How can core of Mercury be a molten liquid?

We all know that Mercury's surface temperature varies a lot from day to night, from 427 °C in a day dropping down to −173 °C at night.

Mercury has a hot molten outer core inside it. How can it suddenly change its surface temperature in the night time? Is its inner core made of metal with icy water, methane and ammonia similar to Neptune?

So, scientists were surprised when they found that Mercury has a molten core. Since small planets (like Mercury) cool rapidly, the core should've frozen a while ago.

In a nutshell, though, whether or not the core stays molten over time depends on the composition of the core...as this website says,

Maintaining a molten core over billions of years requires that it also contain a lighter element, such as sulfur, to lower the melting temperature of the core material.

Mercury's core is also known to have an impressively high iron content. The interior structure of Mercury is shown below...the core is a significant portion of Mercury. 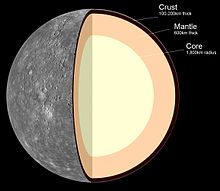 Then, for why Mercury's surface temperature can change - think of Earth, real quick. We have a molten core too, but it can get pretty cold or hot on Earth's surface...and that's with a stable atmosphere that helps regulate things and our prime position (not to far and not to close to the sun). The temperature difference would be even wilder on Mercury where there isn't a protective atmosphere and it's really close to the Sun.

Hope this helps! This website has a lot of useful information about Mercury.

Not the answer you're looking for? Browse other questions tagged astrophysics temperature planets or ask your own question.

6
Transit of Mercury: how did he see it?
1
Mercury's rotation, Disturbation's caused by thermodynamics
2
Energy transport mechanism in stars
7
How do we know the Earth's core is Molten with Seismology?
1
How hot can the surface of a planet be?