What is Venus's core made of?

As we all know Venus's surface is so hot that it can probably melt lead. What would be in it's in core? Is it in the liquid or solid state? What would be it's temperature? How many cores does it have?

Scientists think that Venus' internal structure is somewhat like Earth's, as shown below: 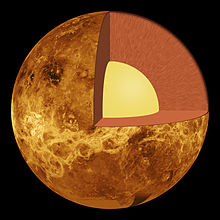 In other words, a crust, mantle, and core. The evidence points to Venus not having plate tectonics like Earth or a magnetic field. Venus also probably has a partially molten core, like Earth, as it has been cooling at the same rate.

Honestly, we don't know much else. We can tell you the atmosphere composition, but we don't know what the core is made up of. The Venus Wikipedia page (here) is very helpful and has more information and explanations of why we don't know these things.

Venus's Mass is roughly $.815 M_e$. So it would not be unorthodox to hypothesize that it is molten, which is supported by the volcanoes on its surface. It probably has a solid molten metal core like ours, with a smaller mantle and the solid core region, with the core being smaller in proportion to the mantle then our core to mantle ratio.

Venus core is probably made of iron and nickel. With a sprinkle of other elements. Also some radioactive elements might provide some heat in Venus' core. Its inner core might be solid but its outer core might be liquid. However the outer core will not be as fluid as here on Earth because of Venus's slow rotation. This is why Venus does not have a magnetic field. Venus's slow rotation is not able to make Venus's core create a magnetic field.

4
Does the Earth have a semi-solid body at its core because of lower pressure at the center of the Earth?
1
Function for heating of a planet by its star
10
How does one calculate where the "surface" of a gas-giant would be?
24
What would the collision between a (large) solid planet and a gas giant be like?
3
What are the theoretical bounds on the Gas Giants' Cores
4
How can core of Mercury be a molten liquid?
3
If a planet's core is heated by its gravitational pressure, where does that energy come from?
0
Why Earth’s crust is max 100 kms wheras Moon and Mars have much thicker ones?