How does superfluids and Bose-Einstein Condensates form?

Superfluids or Bose-Einstein Condensates can form from bosonic particles (such as the integer spin 0 $^4\mathrm{He}$) at low temperatures near absolute zero when all the bosonic particles in it start to occupy the same lowest quantum state, such that they coalesce into a single quantum mechanical entity that can be described by a wave function on a macroscopic scale.

However, there will be electromagnetic repulsion between the bosons which will not enable it to crowd and thus they seemingly cannot all achieve the same quantum state. This electromagnetic repulsion is a function of charge, not temperature, so I don't see why cooling it to near $ 0~\mathrm{K} $ will help many bosons get to the same quantum state. The material should behave the same at any temperature, with only classical state changes and density decreasing as temperature decreases due to lower $V_{rms}$ of the particles.

If this is what happens then how does Bose-Einstein Condensates and superfluids form? Don't they form as a result of crowding of bosons into one single quantum state? How can this be achieved with EM repulsion forcing these bosons apart?

Interactions have a crucial role in the process of making a BEC.

In theory, it is possible to produce a BEC starting from an ideal gas (i.e. a gas of non-interacting particles) of bosons and by cooling it down. Note that most of time, the way the gas is cooled down is never specified, the temperature $T$ of the gas is just taken as a parameter.

More specifically, statistical mechanics tells you that the temperature of an ideal gas gives the mean kinetic energy per particle, i.e. $\langle E\rangle/N\propto k_BT$ where $N$ is the number of particles in the gas. This means that is possible to define a mean, thermal, de Broglie wavelength $\bar\lambda_T$ for particles inside the gas, such that : $$ \frac{\langle E\rangle}{N}=\frac{\hbar^2(2\pi/\bar\lambda_T)^2}{2m}\propto k_BT $$ This implies that $\bar\lambda_T\propto1/\sqrt{T}$. The gas also have a given density $\rho=N/V=1/\bar r^3$ where $V$ is the volume of the gas, and $\bar r$ is the mean distance separating the particles from each other.

For $T$ low enough such that $\rho\bar\lambda_T^3\gtrsim 1$, i.e. $\bar\lambda_T\gtrsim\bar r$, individual wave-functions of the particles start to overlap, meaning it is no longer possible describe independently one by one the state of each particle. Indeed, here particles are identical therefor indistinguishable, so it is needed to build a $N$-body quantum state (which has to be symmetric for bosons) to describe the gas.

It can be shown that from this indistinguishability stems the Bose-Einstein statistics, giving the mean occupancy $N_\textbf{p}$ of a momentum state $|\textbf{p}\rangle$ (remember, the gas is ideal here so there is no interaction/collision between the particles, meaning that $|\textbf{p}\rangle$'s are eigenstates of the system) : $$ N_\textbf{p}=\frac{1}{e^{(E_\textbf{p}-\mu)/k_BT}-1} $$ For $N_\textbf{p}$ to be a definite positive quantity, it requires that $\mu$, the chemical potential, to be smaller than the smallest of the $E_\textbf{p}=\textbf{p}^2/2m$ energies, which is simply $E_0=0$, corresponding to the $|\textbf{p}=0\rangle$ ground state.

What I wanted to show you with this is that Bose-Einstein condensation requires constraints on both temperature $T$ and density $\rho$. But there is no constraint on the spatial position (the reason being that particles are in the $|\textbf{p}=0\rangle$, meaning that particles are completely delocalized in the volume $V$ because of the uncertainty principle). The condensation occurs in momentum space rather than in real space.

Without getting into too much details, it can be also shown that, appart this quantum depletion, the BEC phase still stable for (repulsively) interacting particles (people familiar with the field will remember the Bogoliubov approach).

Bose-Einstein condensation in the lab

Actually, people are very clever and have shown that is possible to use the interactions/collisons in order to produce a BEC irl. If we restrict this discussion to BEC of some atomic species (cf Ariana Grande's comment to your question), laser cooling technics allow you to cool down an atomic sample to a temperature about the order $1$ or $10\;\mu K$ (this is more or less true depending on the atomic species you are using, the most common being Rb87).

In this condition, if you compute $\rho\bar\lambda_T^3$, you will find something which is typically on the order of $0.1$, which is not enough to condense. That is why, most of time, it requires evaporative cooling to reach condensation.

The principle is quite simple. When you want to cool down your hot coffee cup, you usually blow on it. By doing so, you blow away from the surface of the water the hottest particles and cool down the system. In the lab, people are using this idea to cool at very low temperature atomic gas toward condensation.

Atoms are first trapped by lasers in some "atomic cups". Then, by decreasing the power of the trapping lasers, the depth of the trap $\epsilon_\text{ev}$ is gradually decreased and the hottest atoms are expelled from the trap. 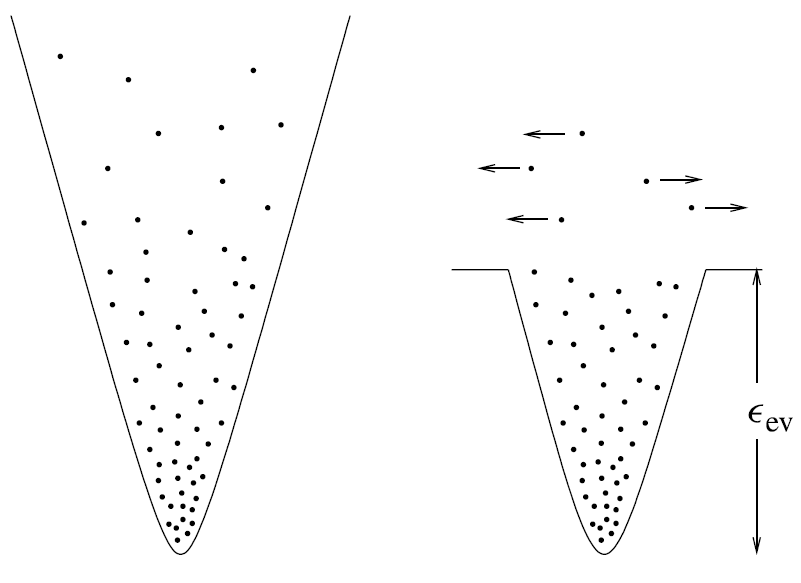 The interactions are key here : since the atoms can produce collisions with each other, the gas can thermalize, meaning that at each gradual step where the depth of the trap is decreased, the energy loss generated by the loss of the hottest atoms can be redistributed to the all gas, leading to a global decreasing of the temperature.

In general, 99% of the initial atom number is lost by evaporation. But the 1% left can be very cold, with a temperature about the order of $1\,\text{nK}$ , even colder!

First of all, I have not directly worked on BEC or laser cooling per se, but what I am writing is my understanding after discussing this subject with a person who is directly involved in this activity. Hence if anything is wrong or inconsistent please let me know.

As rightly said by @Lagrangian that it is not required that the particles should be at same co-ordinate position. I would like to add that when we cool Bosonic atoms then the wavelength of the atoms (that means both electrons and nucleus as a whole) start to increase. After the cooling by laser cooling and then magnetic evaporation there are very few particles left inside the volume (density ~$10^{13}-10^{14}$ particles per cc). If the wavelength of the particles is large enough that the volume within wavelength contains more than 1 (appreciably more than 1) particles. The wavefunctions of these particles will try to overlap and since they are bosons they will try to go into the ground state.

This overlapping of wavefunction results in the appearance of a large density peak at the center of BEC. Though classically the particles are not at same position. However in this condition it become impossible that one can distinguish between the constituting particles of BEC. You may visualize the BEC as cloud of atoms where individuality of each atom is lost.

The large density peak is the manifestation of the maxima of wavefunction overlap. You can not say that the atoms are at same coordinate positions because they are no longer different atoms but a single wave-packet of the size of BEC.

The general misconception is that the bosons in BEC and superfluids are in the same quantum state including the same spatial coordinates. This would result in stacking of each particles' wave function and unlimited reduction in volume of such a substance.

The truth is that the particles in BEC or superfluids do not necessarily crowd, but have the capability to do so when perturbed or set into flow motion. They still experience the electromagnetic repulsion between them which prevents their volume from unlimited decrease and this also serves to explain its $0$ viscosity. The internal repulsive EM forces is conservative and does not dissipate energy, rendering no internal friction which in turn renders viscosity at $0$, (there is lack of attractive forces between the particles to increase it's viscosity).

Not the answer you're looking for? Browse other questions tagged condensed-matter bose-einstein-condensate pauli-exclusion-principle or ask your own question.