The tides raised by the moon on the Earth's oceans are adequately and universally explained by:

…although Galileo, of course, described the whole idea of the moon influencing tides as lunacy.

My question is purely about the shape of the equipotential surface in 1 – or equivalently, and more graphically, about the difference in height between high tide and low tide if the Earth were entirely covered by an inertialess ocean with zero viscosity.

What I am looking for, therefore, is a source which can be considered authoritative and is not just a referenceless repeating of "what everyone knows".

The value of 0.54 m is derived in the supplement resources "Tidal Distortions" to [1]. This is freely available on this page, and here is the address of the PDF for convenience. The computation of 0.54 m is done just after equation (20) on p. 13.

My question is purely about the shape of the equipotential surface in 1 – or equivalently, and more graphically, about the difference in height between high tide and low tide if the Earth were entirely covered by an inertialess ocean with zero viscosity.

Wikipedia says "The theoretical amplitude of oceanic tides caused by the moon is about 54 cm" but gives no reference for this figure. ...

What I am looking for, therefore, is a source which can be considered authoritative and is not just a referenceless repeating of "what everyone knows".

1. The University of Hawaii has a website: "Exploring Our Fluid Earth" which they describe as:

They explain in simple terms that the exact answer depends upon:

"Factors that influence tidal range occur not only on a solar system scale, but also on local scales. Tidal ranges vary considerably at different points of a coastline due to seafloor features. When oceanic tidal bulges hit wide, shallow continental shelves the height of the tide is usually magnified. Conversely, mid-oceanic islands that rise steeply from the seafloor and do not have continental shelves have smaller tidal ranges. Mid-oceanic islands often have very small tidal ranges of 1 meter or less.

In narrow mouthed basins that are connected to the ocean, the tides often rise higher than in wide bays and harbors. This is analogous to pouring an entire can of soda into a short wide glass and a tall narrow glass. The soda will rise higher in the narrow glass, because there is not as much area to spread out as in the wide glass. The same amount of seawater will rise higher in a narrow basin than in a wide-mouthed harbor.".

2. The Public Encyclopedia Services Home Page has a webpage titled: "Ocean Tides - The Physics and Logic" which explains in detail (while certainly leaving some things out) the math behind the calculations.

3. The National Oceanic and Atmospheric Administration, U.S. Department of Commerce, has over a dozen webpages: starting with the Welcome page: "Tides and Water Levels", and white seemingly devoid of any math, the eleventh page, titled: "Tides Roadmap to Resources", lists numerous references.

4. PhysicalGeography.Net has a far too short explanation with great graphics, that depicts a greater range:

5. The Wikipedia webpage you referenced "Tides" is indeed a bit sparse on math too, try this Wikipedia page: "Tidal Acceleration".

I imagine you read the Wikipedia explanation on how much tides vary. That 54cm would require no sun, but still liquid oceans and the Moon to have a circular orbit around the Earth with uniform ocean depth and no land. It's a calculated number not a practical one, but it is 54cm above and below normal giving a 108 cm range.

Imagine a U tube full of water where the Moon's gravity pulls upward on one arm, but not the other. Water would rise in that arm. 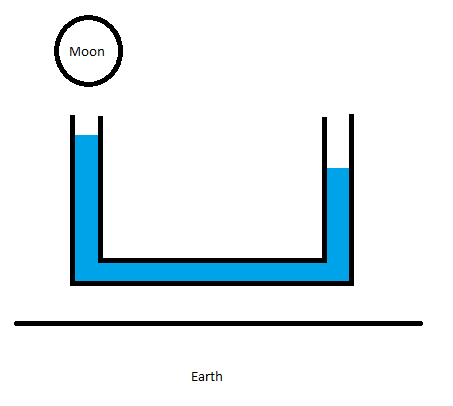 Water will not flow from one arm to the other if the pressure is the same at the bottom of each arm.

h is the depth of the ocean.

Not the answer you're looking for? Browse other questions tagged tidal-effect or ask your own question.

4
How gravitation affects tides
228
Does Earth really have two high-tide bulges on opposite sides?
3
What are the tidal effects of Io on Jupiter?
9
Measuring tides in a swimming pool
2
Torque due to tidal force
7
Relative size of the 2 tidal bulges
0
The role of the Sun in spring and neap tides
31
Does bottle water rise a little bit on full moon days?