I have this potential

And I want to know, qualitatively, how the wave function would look like.

But what happens in the middle? I'm not interested in the mathematical approach for this, I've already looked it up and it seems to be related with Airy functions or something like that. However, I want to understand what would happen, not just do the math. I think that the wave function in this zone will depend on the value of $E$ the particle has.

My guess is that if $E<V_o$ the wave function would look like a sine wave atenuated along the $x$-axis until it reaches $x=a$, where it would become constant. If $E>V_o$, it would be the same but with the sine wave increasing its amplitude this time.

Is this reasoning correct? Or any other form of thinking about it?

Qualitatively, the wave functions of the bound states in a triangular potential well like the one you described, look like this: 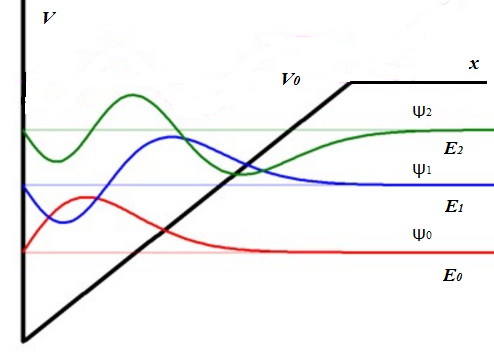 For $x<-a$, $\psi=0$ because of the infinite potential in that region.

Where the wave function crosses the potential line, quantum tunnelling occurs and $\psi \to 0$.

For particle energies above $V_0$, no bound states can exist (these so called scattered states are not shown).

The triangular potential well can be seen as a crude approximation of the Morse potential.

Not the answer you're looking for? Browse other questions tagged quantum-mechanics wavefunction schroedinger-equation potential or ask your own question.

5
Solving a time independent Schrödinger equation with a given potential
3
Physical intepretation of nodes in quantum mechanics
10
Particle in a 1D Box with Symmetric potential: How find solutions?
2
Why can the probability function for a particle in an infinite square well be larger than 1?
3
Tricky particle in an infinite potential well question
5
What is $V(x)$ in Schrödinger's equation?
0
Different energies in finite potential well
1
Quantum Tunnelling with Delta Potential
3
Spectrum of sinusoidal potential
1
Symmetric infinite well potential