Validity of point mass approximation in Newton's laws of motion

Newton's Laws describe the behavior of point masses. In the case where the size of the body is small compared with the interaction distance, this offers no problem. For instance, the earth and sun are so small compared with the distance between them that for many purposes their motion can be adequately described by considering the motion of point masses located at the center of each.

Consider a system consisting of a block kept at rest on a table. Assume that friction is neglected. When drawing a force diagram for such a block, we assume it to be a point mass. (Also see: Section 2.4 of Kleppner & Kolenkow's book... Just to mention that such a step is followed in the book itself.) However, it doesn't seem to me that this assumption is valid, as the interaction distance between the block and the table is so small as compared to their sizes.

Then why is the point mass approximation valid in such a case?

Note: This chapter has not generalized Newton's laws to describe rigid bodies yet. So it would be great if you could answer my question without any reference to that (of course, if possible!).

I think you are comparing two pretty different cases. Motion of the Earth with respect to the Sun (and vise versa) is different from motion of a block on a table with respect to it. In the former, both of the Earth and Sun experience rotational motion and cannot be assumed as a particle without approximation error. But in the later, the block doesn't experience rotational motion and thus can be exactly substituted with a particle in the COM and with the same mass.

I think the book are talking about approximation not modeling.

Your intuition is correct. When considering a block resting on the table the reaction forces do not go through the center of mass (point mass approximation location). See this answer and the accompanying diagram for a more realistic picture. 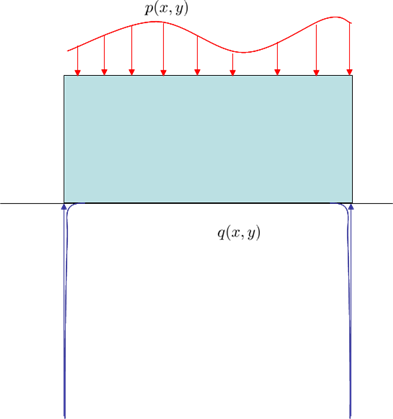 You do find though that for a rigid body, the point approximation is entirely appropriate when modeling the response of the center of mass. For example this video shows the motion of a tennis racket when thrown across a room. When viewed as a whole body the motion seems very complex, but when the lights turn off and only the center of mass is tracked the result is much simpler (a parabola).

Not the answer you're looking for? Browse other questions tagged newtonian-mechanics forces point-particles or ask your own question.

2
How does force transmit through a solid block?

36
History of interpretation of Newton's first law
9
Logical connection of Newton's Third Law to the first two
2
Force inversely proportional to the squared distance
2
Solving for motion of rotating rod using only Newton's laws?
0
How do gas molecules break newton's laws of motion
1
When and why are we allowed to treat a rigid body as a point mass?
2
Rigid body dynamics derivation from Newton's laws for higher dimensions
0
Forces and their reactions