Compute an object's inertia around an arbitrary axis, using its known values for the x, y and z axes

I need to input inertia data into a bio-mechanical simulation program. I can find inertia data for parts of the human body, around the normal axes.

I know the parallel axis theorem, so I can compute the inertia for the body parts in different locations.

But if the body part is angled to the normal axes, can you then compute the inertia, using its known inertia around the x, y and z axes?

This would be the values if the arm is hanging down. But let's say I angle the arm outwards ("abduct" it) by 30°, can I then use $I_x,\ I_y$ and $I_z$ to find the new values? (As the angle increases, the $I_y$ value would gradually fall and reach the old $I_z$ value at 90°. Is there maybe a trigonometric relation for this??) OK, I am not a physicist, I only do bio-mechanics occasionally :)

Edit 19/7:
Just to clarify:
What I wish to find out is how angling of the body parts affects their inertia. To use a diver that is somersaulting forward as an example : If the diver keeps the arms straight down the body, the values given above would be correct. But the diver can reduce his/her inertia by angling the arms outwards. (You sometimes see divers do that in the pike position.) I wish to compute the inertia for different angles, all for rotation forward. I wish to start with just the body part alone. (After that you can apply the parallel axes theorem.)

I wonder if there could exist a simple trigonometric relationship since one can divide the mass into point mass elements? I can't prove this is the correct answer but I plotted $0.3\cos(\alpha) + 0.02\sin(\alpha)$. It would show how the moment of inertia of the arm, for rotation forward (like in somersaulting), would decrease, as the arm is abducted (by $\alpha^{\circ}$). (In this example the arm alone is "somersaulting".) Intuitively it looks "OK". 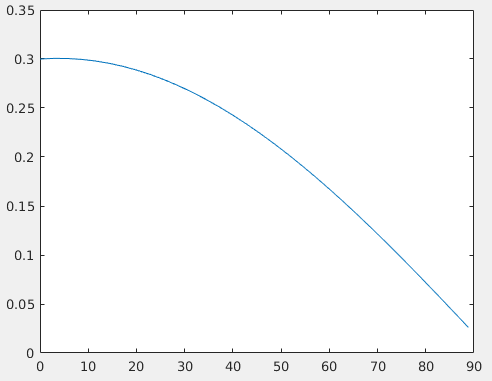 (The other alternative is that this can't be computed. You must make a new measurement. But in the case of the arm (looking a little like a rod), I think at least a reasonable estimate could be computed from the x, y and z values.

But what leads me to believe that it is computable, is that you can input $I_x,\ I_y$ and $I_z$ to computer programs and they can compute rotations along oblique axes.)

Unfortunately, the three non-diagonal terms $I_{xy}$, $I_{yz}$, $I_{zx}$ cannot be calculated from $I_x$, $I_y$, $I_z$; they are independent quantities that must be measured separately. However, these terms are often zero when the object is symmetric: if there is reflective symmetry in the yz-plane, then $I_{xy} = I_{zx} = 0$; if there is reflective symmetry in the zx-plane, then $I_{yz} = I_{xy} = 0$. I suspect both of these are true for a human arm, to a good enough approximation for your purposes.

Note: the tensor is always symmetric in the mathematical sense (even if the object has no geometric symmetry). This means the written order of the indices doesn't matter: $I_{xy} = I_{yx}$, etc. That is why the inertia tensor has 6 degrees of freedom, rather than 9.

Not the answer you're looking for? Browse other questions tagged moment-of-inertia or ask your own question.

1
What is the moment of inertia of a cylinder about a skew axis?
1
Product of Inertia for common 3D Solids