Will a tennis ball go further if i hit it with the side of the racket?

If i hit a tennis ball 'properly' on the stringing, does it go further than if i rotate the racket 90 degrees in my hand and hit the ball with the same force, but on the side of the frame? I'm assuming I'm good enough to hit the perfect shot in each case!

Arguments for and against range from 'better' elastic energy from the stringing, to greater compression of the tennis ball due to the side of the racket providing a smaller contact/surface area.

Will a tennis ball go further if i hit it with the side of the racket?

You want the racket to deform, not the ball. This means using the strings to elastically store energy and return it to the ball.

The ball's deformation upon impact is undesirable because "a tennis ball is required by the rules of tennis to dissipate a fraction of the energy it absorbs when it deforms against a hard surface" [2]. More specifically, a ball dropped from a height of 100 inches is required to bounce back to within 53% to 58% of its original height [3]. To minimize the energy lost by the ball's deformation, a large fraction of energy should be absorbed by the racket frame and strings.

Unlike the tennis ball, the strings store energy by deforming. Due to their high elasticity, the strings recover from deformation about five times more quickly than the massive racket frame, allowing a greater efficiency in returning the stored energy back to the ball - almost all of the energy stored in the strings eventually returns to the ball.

Tennis players may select a desired string tension. A lower string tension translates into greater stiffness in the string plane and greater deformation upon hitting the ball. In other words, lower tension gives the player more power. "There is, of course," wrote Howard Brody, a professor of physics at the University of Pennsylvania, "a point of diminishing returns. After all, you can't play tennis with a butterfly net. When the strings start moving and rubbing within the string plane, you begin to get serious energy loss" [3]. Generally, an acceptable range of tension is specified somewhere on the racket frame; as long as the string tension lies within this range, there is no need to worry about diminishing returns.

The Quest for the Perfect Racket: Advances in Tennis Racket Design

Here's some tennis racket physics from Rod Cross, including links to several Am. J. Phys articles (the physics educators' journal, thus excellent for learning from) and this excellent diagram: 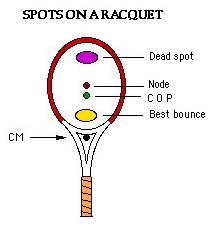 There are at least three "sweet spots":

You're proposing turning the racket and hitting the ball with the frame: essentially, using the racket as a bizarrely-shaped bat. Bats have their own sweet spots: nodes for the first (and higher) bending modes of vibration in addition to the center of percussion:

The third mode of excitation in this figure is present only in hollow bats. You'll have something similar in the vibrations of the oval part of your racket. Consider the trampoline effect that makes aluminum bats more forgiving than wooden bats:

Studies have shown that a good player, who consistently makes contact with the ball at the sweet spot of the bat, can hit a ball just as far or perhaps a little farther with a wood bat as he can with an aluminum bat. The trampoline effect comes into play for poor hits away from the sweet spot. [...] As a result a ball hit by an aluminum bat will usually go farther than a ball hit by a wood hit.

The amount of reasoning which I have elided above (at the ellipsis) makes me think that your question can only be answered in the ideal case based on numerical computations, depending on the springiness of the strings and the stiffness of the racket, both in its designed and its not-designed configuration. It might make a fun undergraduate semester project.

In the non-ideal case the argument after the ellipsis wins out: you're better off hitting the ball on the strings, because trying to hit on the frame you'll have a batting average like a baseball player. Right now the best professional hitter is Daniel Murphy, with a 0.350 batting average, though I doubt the variation among the top ten or twenty is statistically significant. But if you whiff two of every three tennis balls that comes at you, it doesn't matter how far they go: your opponent can volley, and you're screwed.

To impart certain amount of kinetic energy to tennis ball you will have to do work on it. Now, work done= Power x Time. The difference between hitting using netting and hitting sideways is that, in the former case you have more contact time with the tennis ball available, so you need smaller average power to do necessary amount of work. When you hit sideways, contact time available is less, so to do certain amount of work, you need higher average power. If required power is beyond your capability, then you will end up doing less work and therefore less amount of kinetic energy is imparted to the ball. Of course you can't make the netting too slack thinking that it will thus increase contact time and therefore must be better, because then the netting will loose its "stiffness" (I am not sure what is the right word here), its ability to bounce the ball.

My guess is if you hit the ball on the frame it should go farther. Here's my thinking: Hitting with the frame causes all the compression energy to go into the ball. The frame does not compress at all. Hitting on the stringing causes both the ball and strings to compress, which expends more energy than compressing the ball alone. The more energy that goes into compressing the stringing, means less that can go back into the ball on its return.

I imagine, the designers of the racket built it so that the strings do not provide maximum hitting power, as that would be too uncontrollable. They were probably designed to absorbed some of the impact and return the ball in a slower, more controlled manner.

This is just my opinion in the name of discussion, however. Feel free to rebuke or agree! :)

Not the answer you're looking for? Browse other questions tagged newtonian-mechanics classical-mechanics pressure elasticity or ask your own question.

1
At what point does a projectile leave a slingshot?
3
Were there any efforts made by early physicists to discover and explain how composite bodies fall?
1
Projectile Motion with air Resistance - Adjust only the Angle to hit a target
3
Why does spinning a golf ball one way make it go further than spinning it the other way?
0
Toppling and friction
9
Bounce of a ping pong ball vs bounce of other things (How does the material affect ?)
1
Measure force produced by air pressure in pipe system with valve