Will heat flow by conduction oscillate until thermodynamic equilibrium is reached in a solid object?

Consider the following thought experiment with $2$ conducting objects $A$ and $B$, 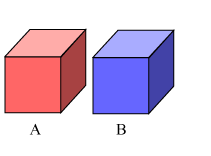 where object $A$ is initially at a much higher temperature than object $B$.

The objects are now placed in perfect thermal contact,

Assume that once the objects are in contact all sides are covered with a perfectly insulating material so that no heat can escape (an isolated system).

My question is concerning how the thermodynamic equilibrium was reached: 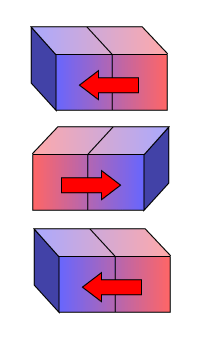 Will this oscillating process ever stop (I guess it would have to; otherwise thermodynamic equilibrium will never be reached)? Or will the oscillations decay in time?

I know the heat is transfered due to particles in the hotter object vibrating and colliding with neighboring particles and as a result heat is transferred. But once these collisions reach the end of the connected cooler object, that object in turn will be at a higher temperature (unless I'm missing something) and the heat will flow back to the previous object. Am I completely wrong about this situation and the heat flow direction does not oscillate whatsoever?

You are mistaken. You seem to be assuming that there is some kind of inertia in the process of heat transfer, as in water sloshing about in a tank. There is no such inertia here, so there is no oscillation.

Since heat has been transferred from A to B, unless I'm mistaken this will place B momentarily at a higher temperature than A.

Yes, you are mistaken about this. The Fourier Model is continuous: a finite excess of heat energy is not transferred which makes B hotter than A. In the model, the amounts transferred are infinitesimal, and cause infinitesimal changes in temperature.

You are also missing that there is a reverse process going on at the same time. As soon as the temperature of B rises even a little, the rate of heat flow back towards A also increases. There is no time delay in waiting for the 'heat wave' to be reflected from the far end of B.

In the Fourier Model, the process of heat flow out of each element of material is not directional. It is a diffusion process which happens at random equally in all directions regardless of the temperature of adjacent elements. But the amount of out-flow increases with temperature, with the result that there is a net flow of thermal energy away from regions with higher temperature and towards those with lower temperature.

When B reaches the same temperature as A there is a dynamic equilibrium between the flows from A to B and B to A. Heat does not continue flowing preferentially from A to B because of inertia. When you apply the mathematical model the result is not an oscillation, but an exponential decay in the temperature difference between A and B.

Outside of the ideal model, because heat flow is a random process, in reality there are small random fluctuations in temperature between two bodies which are in thermal equilibrium. However, these fluctuations are insignificant unless the bodies are microscopic (or your thermometer is highly accurate), and they are not oscillations.

Not the answer you're looking for? Browse other questions tagged thermodynamics conductors thermal-conductivity thought-experiment or ask your own question.

2
Heat exchange depending on coolant flow direction
2
Zero entropy change
1
Will the heat flow of Joule heat be different, if the Joule heat is dissipated in a material that has a temperature gradient beforehand?
0
Heat flow in a hollow cylinder
1
When two objects of different masses do not exchange heat between them and surrounding, which object will have higher tempeature
1
Why is bringing two object to their initial temperature an irreversible process?
1
The general 'driving force' behind attainment of thermal equilibrium and dynamic chemical equilibrium
1
Stirring the Pot: A Simple Question About Heat-Transfer
0
Do bodies need to be in contact to be in thermal equilibrium?