Why can't diamagnetic and paramagnetic materials be magnetized?

Before entering into the classification of magnetic materials, let's see how magnetic properties are introduced in a material.

You must have learnt that magnetism is caused by the motion of charges (or a current). All matter are made up of atoms. Atoms contain a massive core called nucleus and orbiting electrons surrounding the nucleus. The electrons are charges. They orbit around the nucleus in a circular (approximate) fashion. It's like a charge continuously circulating through a circular loop of wire. This can be seen as a current flowing through the circular orbit. We know that the magnetic field produced by a circular coil is identical to that of a magnetic dipole (Ampere's hypothesis of a circular current loop) as shown below. 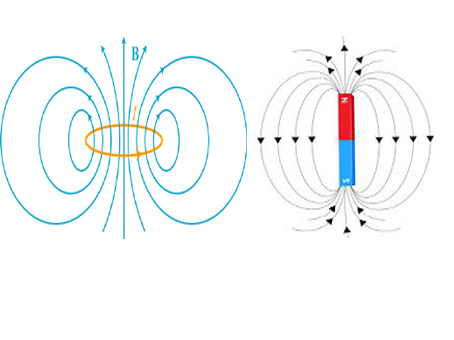 So, this causes a magnetic field to be created by the orbiting electrons. In addition there is another effect that contribute to magnetic effects, which is the spin of electron. The next possible source is nuclear spin, which can usually be neglected in most cases.

Now, for those atoms which have paired electrons in the valence shell, the opposite motion of the two electrons cancels their net magnetic moment. So we cannot see any magnetization property on such materials. But certain materials have such an intrinsic property that their individual magnetic dipoles get oriented in a particular fashion so that the generated magnetic field opposes the applied field. This is what that happens in a diamagnetic material. To say, every materials are diamagnetic to some degree. Perfect diamagnetic property are shown by superconducting materials.

Some have unpaired electrons in the outermost shell. So there is no way to cancel out the net magnetic dipole due to individual atom. But, in the absence of a magnetic field, these individual dipoles will be oriented in random directions. On the application of an external field, these dipoles get aligned in the direction of the applied field. This means there arises a positive magnetization in these materials. These are called paramagnetic materials.

Now in the case of ferromagnetic materials, they show permanent magnetization effects. It's because, the atomic dipoles in ferromagnetic materials are not explained by considering individual dipoles, but by using the concept of domains. There are certain regions in the material in which the magnetization is in a uniform direction. You can group that region as a domain. This means that the individual magnetic moments of the atoms are aligned with one another and they point in the same direction in a certain region of the material. So without an externally applied field, there will not be any magnetization as the individual domains will be arranged in a random way. But in the presence of an external field, these domains get aligned in the direction of the field, resulting in a strong magnetization. Now, even if you cut off the field, the magnetization persists.

There are also other materials which show magnetic effects based on domains- ferrimagnetic and anti-ferromagnetic.