A question on uniform circular motion and minimum tangential velocity

I've had a bit of a crisis in my understanding of circular motion and I'm hoping to clear it up here.

Furthermore, if an object is is in uniform circular motion along a vertical path such that, in the critical case, the only force acting on it is gravity, then what stops gravity from making the object fall towards the ground instead of continuing to follow its circular path? (I get that it is the fact that the object has a large enough tangential speed)

By requiring that $ \frac{GMm}{R^{2}}=\frac{mv^{2}}{r}$ is this because we wish to know the conditions that must be satisfied for this object to continue in a circular path (as opposed to taking to the ground due to gravity) under the influence of gravity. Circular motion is characterised by the net force satisfying $F= \frac{mv^{2}}{r}$, and so this relationship must hold in the case in which gravity is the only force acting in order for the object to maintain circular motion?!

Something that is left out of (or insufficiently emphasized in) a lot of textbook treatments of centripetal acceleration/force is how physicist use this fact.

You are expected to read a problem, notice that some object (say a ladder with a fireman on it) is not accelerating and then proceeded to use take advantage of the equations of static equilibrium $\sum_i F_i = 0$ and $\sum_i \tau_i = 0$ to work the problem.

Equivalently you are expected to read a problem notice that some object is following a circular path and say "Oh! I know something about the sum of the radial forces $\sum_i F_i \cdot \hat{\mathbf{r}} = -m \frac{v^2}{r}$. Then you look at the forces in action in the problem and figure out the implication of that constraint.

You've been trying to work the problem forward: I know the force and from that I deduce the action. That works, and is done in a complete treatment of planetary motion, for instance, but the math is complicated.

What the book is expecting you to do is work the problem backwards: the [object] is following a circular path so I know the sum of the radial forces on it, so I can constrain one of the forces...

In the 1st case, of the object performing circular motion above the ground, presumably a string will keep it moving in a circle when gravity no longer pulls it in the right direction. The centripetal force is provided by a combination of tension in the string and gravity :
$$\frac{mv^2}{r} = T+mg\cos\theta$$ where $\theta$ is the angle between the string and the vertical. Minimum tangential velocity to avoid the string becoming slack at the top of the loop $\theta=0$ (and the particle leaving a circular path) is given by $T \ge 0$, that is
$$\frac{mv^2}{r} \ge mg$$

In the 2nd case, yes - the idea behind $\frac{GmM}{r^2} = \frac{mv^2}{r}$ is that this is the condition for gravitational attraction to provide the centripetal force.

The particle does fall down under the force of gravity at the topmost point. Imagine another particle of the same mass at the same speed moving in the same direction,but no string is attached to it. Lets say both particles are at the same height and velocity at time t=0. During infinitesimal time interval dt (dt is exceedingly small tending to 0) both of them will have the same trajectory as all the kinematical quantites are the same - gravitational force,velocity and height.

But after dt the particle attached to the string will have another force - the tension.This tension is perpendicular to the particle's velocity and provides the centripetal acceleration along with gravity.

You can resolve the gravitational force along the string and tangential to it .The tangential one will increase the velocity and the perpendicular one along with tension will cause it to move along a circle.(At the topmost point gravity doesnt have any tangential component.But at lower points it will have a tangential component.)

The other particle has no other force on it except gravity and will fall to the ground.

*I didnt write any equations here because this is my first answer and I am still learning how to show them here.

Gobind Singh's answer is good. I just wanted to add a few quick illustrations to speak to your question "what stops gravity from making the object fall towards the ground instead of continuing to follow its circular path?". Like Gobind said, imagine it there was no string attached to the mass. It would fall straight to the ground but only if it had no initial horizontal velocity, otherwise it would follow a parabolic path. If the speed is too slow that parabolic path lies inside the circular path described by the taut string and the string goes slack. If the speed is too fast the parabolic path lies outside the circle and additional force in the form of tension is required. 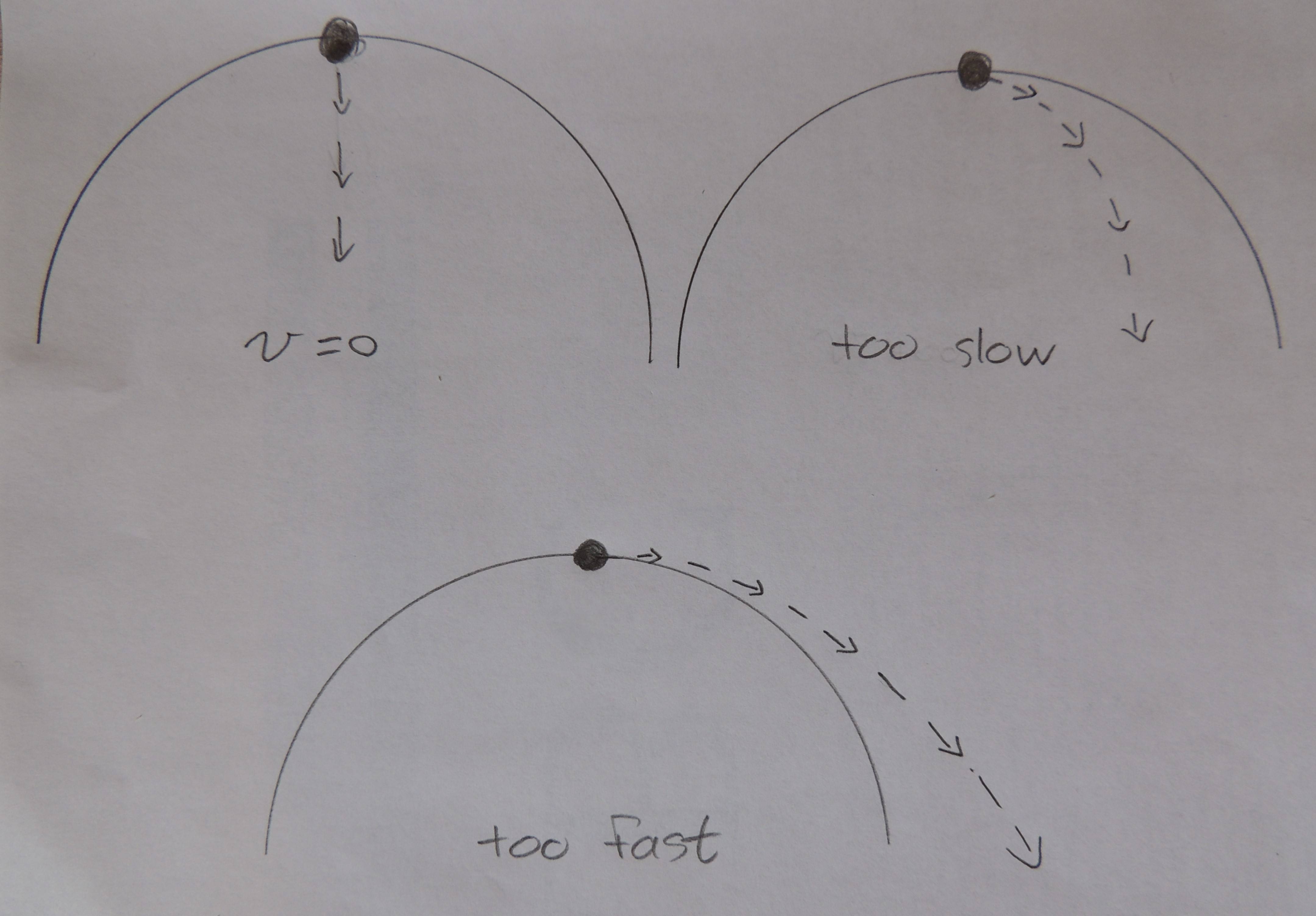 I think your above statement is correct for an Uniform circular motion.

But afterwards you apply it to a body rotating in a vertical circle ...which of course is a motion in a circular path but the action of gravitational pull on the particle changes the energetics of the path.

As the body moves up its potential energy increases and this must be at the expense of its kinetic energy:

Therefore if it has a velocity say $v(l)$ at the lowest point it must get reduced as it proceeds further up on the circle and if it reaches the top point the velocity must have reduced such that the change in kinetic energy must equal to the the increase in potential energy i.e. $2rmg$ if mass of the body is m and radius of the circle is r.

So, its a case of Non-uniform circular motion and your above statement can not be applied in total.

However ,if the body is moving on a circular path the force needed to maintain its path i.e. the centripetal force will always be acting including the lowest point and the highest point -

the tension in the string will be different -as the tension will represent at each point a force proportional to square of velocity (including a component of weight)...the tension will vary throughout the motion.

If you wish to have tension to be zero at the top -it will mean that the gravitational pull will provide the centripetal force and the observer sitting on the body will not feel the force - a state of weightlessness. The crossing speed at the top will be such that $$m \frac{v(t)^2}{r} = mg$$ Really this happens in the case of earth's satellite moving on a circular path and the centripetal force is provided by the gravitational pull and the man in the satellite does not experience any gravitational pull- a state of weightlessness.

Not the answer you're looking for? Browse other questions tagged newtonian-mechanics newtonian-gravity centripetal-force or ask your own question.