Well, i know that the electric flux is the number of field lines passing a certain area, but (1)what does that mean? I can't the concept itself. I know it have many applications, gauss law one of them, but (2)what information does it reflect?

Gauss law states that the electic flux in any closed surface equals the charge enclosed in it divided by epsilon zero. I understood its derivation using a sphere but i didnt understand (3) how the integral or the flux is always the same independent on the shape and size of any shape?is there a proof or something plus a logical explanation? I heard many explanations stating that the number of field lines is always the same, but the angle also affects the flux so how is stays the same?

1) Electric flux lines model helps us to understand the behavior of an electric field much simply and it's pretty easy to visualize it. The definition of electric flux is the number of filed lines passing a given area normal to it. The field lines show the direction and magnitude of electric force at some point. The density of field lines at some region of space indicate the strength of the field at that region. This means there is a direct proportionality between the electric field and the flux lines. Suppose you have a positive charge $q$. By convention, we say that the field lines diverges from it (flows out from the source). The divergence follows spherical symmetry. 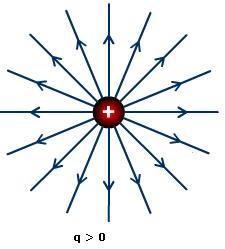 As you can see from the figure, the field line density is more near the charge, and drops off as you move far away from the charge. This shows that the electric field from a point charge decreases with the distance from it. The electric field, which is called the electric flux density, obeys inverse square law.

2) The information that you get is the direction and magnitude of electric field at some region due to a charge distribution. The electric field is proportional to the number of flux lines passing a given area normal to it. But, how can that be made a standard reference? I mean, you are about to speak about the strength of electric field due to some point charge based on the number of lines passing a given amount of area normal to it. So, we introduced the concept of flux density, which is very useful in the formulation of the theory. Electric flux density is the number of field lines passing through unit area normal to it. By this way, you can compare two fields as they entirely depend on the flux density. So there comes the term electric flux density $E$. It shows the electromagnetic effect of some charge distribution at some distance on another charge. As you can see in the above figure, the relative spacing between the field lines is more near the charge. This means the flux density, or the electric field is strong near the charge and decreases as you move away from it.

3) Gauss's law is a physical application of Gauss's divergence theorem, which states that the outward flux of a vector field through a closed surface is equal to the volume integral of the divergence over the region inside the surface.

As we can see in the figure above, the electric field lines are diverging from a source- a charge distribution, which can be a point charge, a line charge, a surface charge or a volume charge. Here our vector field is the electrostatic field itself. Now, to apply Gauss's law, I'am considering an imaginary spherical surface (due to the spherical symmetry of the point charge) enclosing the charge, so that the charge lies at the center of the sphere. 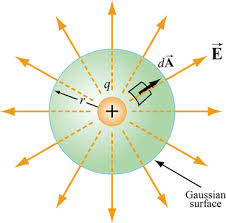 So, we write (I'am not going into a derivation, since that's not your concern)

So this equation tells us the the divergence of electric field through a closed surface enclosing the charge is proportional to the charge or a constant for a given linear medium. This means the size of the sphere is not affecting the value of electric field. This makes sense. As you can see, the electric flux (the number of field lines) through any closed sphere enclosing the charge you draw, is the same, even though the electric flux density differ. In the above figure, about 12 field lines pass the entire area. The same you will get if you consider any bigger or smaller area confining the charge. The number of field lines is a characteristic of the charge and is independent of what sphere you draw. Here the angle is normal, since while defining flux we take the filed lines normal to a given area. Here the electric field also points in the same direction. Hence there is no worry about the effect of angle here.

Not the answer you're looking for? Browse other questions tagged electricity gauss-law maxwell-equations or ask your own question.

5
Why, when and where is Gauss's law applicable?