A ball rolling at the bottom of a spherical bowl [duplicate] 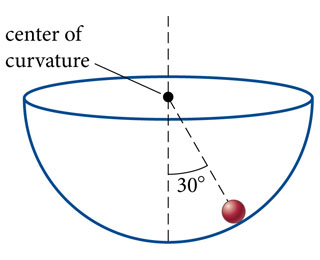 This ball oscillates at the bottom of the spherical bowl which has sufficient friction that it doesn't slip throughout the motion and rolls without slipping. At the extreme points of its motion (as seen in the image) both its velocity and angular velocity is zero.Its translational kinetic energy has been converted into gravitational potential energy. My question is that where does the rotational kinetic energy go? As the gravitational force passes through the center of mass it doesn't exert any torque, and the friction does not do any work as the ball rolls without slipping implying its lowest point in contact with the bowl is stationary.There is no other torque on the ball and hence the rotational kinetic energy should be constant. But the fact that friction does not perform any work against the rotational energy implies that its rotational kinetic energy shouldn't change throughout the motion. But that cant be true as its velocity changes and for the ball not to slip its angular velocity should change. Where in my argument am I going wrong? *I think that the answer could be that the normal reaction doesn't pass through the center of mass and it exerts a torque. 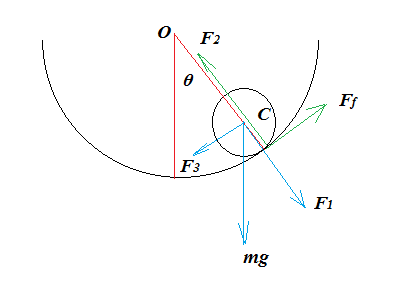 With no radial notion and Newton's 2nd:

Using the simple model of friction, with $\mu$ the static coefficient of friction (no slipping is assumed):

Note also that due to the no slipping assumption:

In a further derivation this allows to calculate the minimum value for $\mu$ to satisfy the no slipping condition.

As the gravitational force passes through the center of mass it doesn't exert any torque, and the friction does not do any work as the ball rolls without slipping implying its lowest point in contact with the bowl is stationary.

It would only be stationary if it was that at $t=0$. But at $t=0$ we start from uphill. By the time the lowest point is reached, the ball has momentum. With no net forces or torques acting in the horizontal axis, its status of motion doesn't change and the ball keeps moving.

It only stops very, very briefly as it is climbing back uphill, after all its kinetic energy has been converted to potential energy.

It is not necessary to consider the torque on the ball. It only makes the situation more difficult to think about. It is best to stick to energy considerations.

Because the ball does not slip, the friction force does no work. However, contrary to your assumption, this does not mean that rotational KE is constant. This is where your reasoning is going wrong.

The no-slip condition means that the angular velocity $\omega$ of the ball is determined by its translational velocity $v$ : $$v = R\omega$$ You cannot change $v$ without also changing $\omega$. So the rotational KE vanishes at the same time as the translational KE, which is at the extremes of the motion.

The fact that friction does no work on the ball means that the total energy of the ball is conserved. At each point on its path, the total of the gravitational PE and the KE of the ball (translational as well as rotational) is a constant.

9
Ball Rolling Down An Inclined Plane - Where does the torque come from?

3
Rolling bowling ball with slipping
0
Rolling ball which slips
1
Acceleration of ball rolling down incline
2
Ball rolling on half-pipe
1
Why does a ball roll?
2
What is the exact role of friction in rolling without slipping?
0
Torque angular momentum equation in case of pure rolling