A “figure-8” EM field created by a dipole antenna

This question pertains to the EM field of a Pulse W5017 dipole antenna. The data sheet of this antenna can be found here (which contains information regarding the radiation patterns).

There are TWO parts to this question. Edited to remove the second part. Let's see if anyone can answer the first part.

The radiation patterns of the antennas are as shown below (from the datasheet): 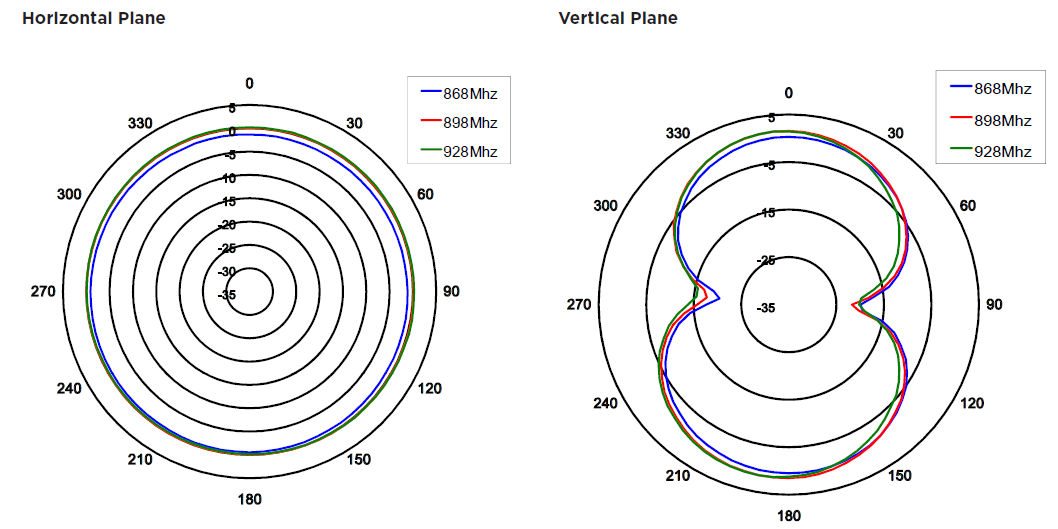 Can the 3D view of the radiation pattern (combining information from both horizontal and vertical planes) be visualized as below? (Ignore the horizontal antenna in the picture, just the two lobes are relevant; in fact my antenna is positioned vertically).

What happens to this lobe with distance? 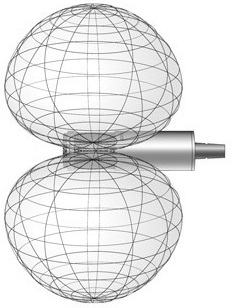 The answer will only be accepted (and the bounty awarded) if a good intuition is provided in the three dimensions. I have removed the second part already since it requires more research.

An insight into the following parameters would be a bonus!

The radiation pattern of any dipole antenna looks similar to what you are showing in the 2D plots - but in your interpretation of the 3D pattern you have the axes wrong.

A dipole antenna with the main axis vertical will transmit power in the horizontal plane, with less and less power as you go further away (inverse square law). If you measure the power as a function of angle $\theta$ to the horizontal, you will get a $\cos^2\theta$ relationship. The 3D pattern can be found on many sites - it is shown on http://www.antenna-theory.com/antennas/dipole.php as 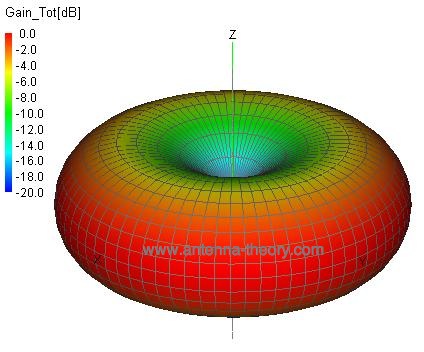 Your datasheet is a bit confusing: when it shows the gain "in the vertical plane", 0 degrees corresponds to the horizontal direction. It would have been so much better if they had rotated the graph 90 degrees...

Why does it have this shape? Well, it follows directly from the fact that electrons in the antenna are accelerating in the vertical direction, and that the power depends on the direction of the acceleration. A derivation for this is given in the wikipedia article on the Larmor Equation. Intuitively, you need to "see" the electron moving in order to see its radiation - when it is moving straight towards you, you don't see the lateral motion. And since EM waves require a lateral (transverse) E vector, there can be no EM radiation in the direction that the antenna is pointing.

As for the gain of the antenna: a dipole can have a gain of 3 dB in the horizontal plane. This follows from the fact that it is "radiating only to half of space" - with twice as much power being available at the peak (this is a hand waving argument but you were asking about "intuition".) Antennas that are more directional (restrict the power to a narrower angle) can have greater gains. The datasheet says this antenna has a gain of 2 dB: a bit less than 3 because of losses.

Not the answer you're looking for? Browse other questions tagged electromagnetism radiation antennas or ask your own question.

6
How is an inflatable parabolic antenna created?
0
Very short ($\ell \ll \lambda$) dipole as a receiving antenna
0
Magnetic field of a Herzian dipole antenna
3
Power loss due to dipole antenna position mismatch
2
Current distribution on a dipole antenna
1
Dipole antenna $E$-field direction
0
Radiation of Electric Dipole - Antenna
0
Does a Dipole Antenna have modes?
1
Far field horizontal polarization component of a dipole antenna
0
What is the maximum and minimum of antenna gap of dipole antenna?