Is the light in a Lorentzclock going slower when you travel with it with 0.9c? [closed]

In a Lorentzclock the light is bounced between the two mirrors with his speed of appr. 300.000km/s. Now when things speed up their time goes slower. But the light is always c, so in the Lorentsclock it also goes with c independent on the speed of the clock. But how is it possible that times slows down, but the light in your Lorentsclock doesn't/can't go slower while every bounce would be a second.

Perhaps this situation could be compared with light in a big gravity. But there the light is making a bigger distance due to curvature of spacetime. So the light still is c but looks going slower because the distance is bigger. Is that also the case with light if you travel with it?

What you are asking is just another version of the Twin Paradox. A twin leaves on a near lightspeed journey to space. When he comes back his twin is now much older than he is. In a Lorentz clock each bounce is a second. Since the speed of light remains the same, the distance goes larger between bounces. 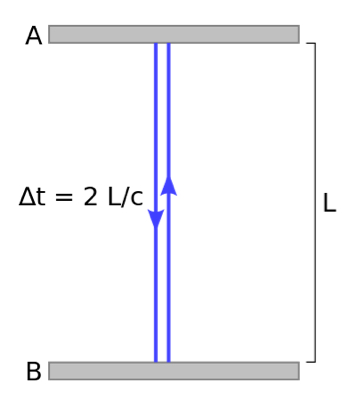 Not the answer you're looking for? Browse other questions tagged general-relativity special-relativity or ask your own question.