Do radio waves from the Sun reach Earth?

Do radio waves from the Sun come into contact with Earth? If so, do they penetrate the atmosphere or are they reflected, absorbed, or scattered?

Do radio waves from the Sun reach Earth?

Of course they do. It's just another form of electromagnetic radiation.

If so, do they penetrate the atmosphere or are they reflected, absorbed, or scattered?

That depends on frequency (or wavelength). The atmosphere reflects, absorbs, or scatters most incoming electromagnetic radiation. There's a window in the visible range, some partial windows in the infrared, and a big broad window in the radio frequencies (including some frequencies that are classified as microwave). This is depicted below. 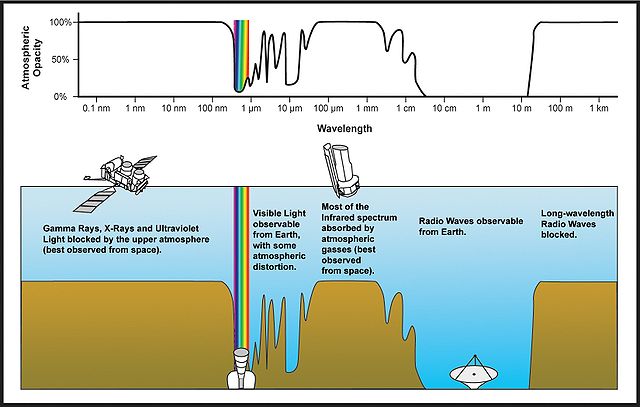 Radar was first used during World War II to detect enemy planes. Most of the scientists who worked on this during wartime returned to their civilian scientific jobs when hostilities ceased. Arthur Covington was one of those scientists. When he returned to his civilian work at the National Research Council in Ottawa, Canada, he cobbled together a radio telescope using spare military parts.

His antenna operated at 10.7 centimeters (2800 MHz) because those were the parts he had available to him. This turned out to be very serendipitous. He aimed his antenna at several objects, including Jupiter, the Milky Way, the aurora borealis, and the Sun. The instrument was too insensitive to pick up any source except for the Sun.

What he saw from the Sun was completely unexpected: The flux changed from day to day, month to month. He aimed the antenna at the sun during solar eclipse in November 1946. The flux dropped just as the Moon blocked a large sunspot. The correlation between sunspot number and the 10.7 centimeter solar radio flux is incredibly strong:

As mentioned, this choice of 10.7 centimeters was serendipitous. It turns out that radio waves in the vicinity of 10 centimeters are predominantly produced in the Sun by sunspots, coronal ejections, and other high solar activity processes. The F10.7 solar radio flux is used to this day as a proxy for solar activity. One problem: A solar radio observatory that uses this frequency band needs to be far away from an airport. Airports also tend to use 10.7 centimeter radio waves in their radars because that's what was used back in World War II.

Offhand I'm not sure where to find information about how much is absorbed, reflected and scattered, but the waves certainly do reach Earth, and some, at least, penetrate the atmosphere and end up in solar radio observatory detectors, otherwise we wouldn't have so many of them.

Not the answer you're looking for? Browse other questions tagged energy waves earth sun radio or ask your own question.

2
Radio waves within an atom
5
Is the energy coming from sun to earth completely sent back?
6
Can human push Earth away from the Sun?
4
Does any lower frequency electromagnetic radiation naturally reach us from the Sun?
1
Why can we see white objects as white under the sun if the sunlight is yellow?
0
Nuclear Reactor Meltdown vs Radio Waves
22
What is the scientific explanation for radio waves bending around the Earth?
1
Radio waves collision versus waves in a pond collision
2
Can there be old radio waves broadcasted years ago still traveling in the air?