Is a straight lightning bolt possible?

Recently, I saw a demonstration where an annealed steel rod and a hardened steel rod were made to fail from tensile stress (they were pulled on like an elastic band and snapped in a vice-like machine) There it was explained that the fault surface in the annealed metal was rough and dull as "there was minimal kinetic energy so the fault found its way through the weakest points in the metal", whereas the hardened steel, which took a lot more force to cause faliure, sheared cleanly and left a razor sharp edge, because "there was so much kinetic energy that it was quicker to simply cut straight across"

My question is whether or not it is valid to apply this logic to the dialectric breakdown of air. We could take sparks and lightning bolts to be akin to the faliure front in the steel rod - there was the minimum required electrical potential energy in the system to jump across, and so the path taken would flow through the "weakest" or most conductive sections of air. Perhaps some situation arose where 10 or even 100 times the required potential difference occured between the sky and the ground, would the sheer magnitude of that voltage cause the arc or lightning bolt to hit straight down, in a perfect line?

By analogy, you are comparing the properities of a solid material, in your first paragraph, to a gas mixture, the atmosphere, in the second.

So the path taken would flow through the "weakest" or most conductive sections of air.

No matter how small a volume of air you take, the conductivity/ionisation path is very unlikely to be consistent enough to allow a straight (as in shortest distance) path from cloud to ground.

There is no real connection between the two situations.

The problem is that lightning is not just a single strike to ground, as the picture below shows. The magnitude of a typical lighting bolt is several hundred million volts, according to Hyperphysics Lightning 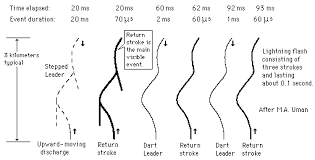 The term lightning flash is used to describe the entire discharge, which takes on the order of 0.2 seconds. But a flash is usually made up of several shorter discharges which last less than a millisecond and which repeat rapidly enough that the eye cannot resolve the multiple events. These individual discharges are called strokes. Sometimes the strokes are separated enough in time for the eye to resolve them, and the lightning appears to flicker.

Not the answer you're looking for? Browse other questions tagged electrostatics electricity lightning or ask your own question.

25
Is it possible to overload a lightning rod?
4
Flashing a fluorescent light bulb with high voltage
5
Lightning Conductor Working
0
Atoms Inside a Lightning Bolt
3
Could you use magnetic fields to direct a bolt of lightning?
1
Would a metal chair suspended in air be hit by lightning or not?
3
How do bulk regions of clouds conduct charges into a lightning bolt?
4
Is lightning possible/visible in vacuum or not?