Can the accuracy in Planck's constant ever be increased?

I guess I am having some confusion about the history of calculating Planck's constant. I see the mass of the electron may come into the equation here but isn't the measurement of mass based mostly on how accurate instruments are? I assume it's not something that can be derived like the ratio of a circle to it's diameter? (flat space). There is measurement involved here and limitations of instrumentation? So can its accuracy ever change or am I just way off course here, may be the case.

Following on from Jon's comment above, this is from the NIST Website (Dated June 21, 2016), discussing a more accurate measure of the kilogram, and the involvement of Planck's constant.

A high-tech version of an old-fashioned balance scale at the National Institute of Standards and Technology (NIST) has just brought scientists a critical step closer toward a new and improved definition of the kilogram. The scale, called the NIST-4 watt balance, has conducted its first measurement of a fundamental physical quantity called Planck’s constant to within 34 parts per billion – demonstrating the scale is accurate enough to assist the international community with the redefinition of the kilogram.

Planck’s constant lies at the heart of quantum mechanics, the theory that is used to describe physics at the scale of the atom and smaller. Quantum mechanics began in 1900 when Max Planck described how objects radiate energy in tiny packets known as “quanta.” The amount of energy is proportional to a very small quantity called h, known as Planck’s constant, which subsequently shows up in almost all equations in quantum mechanics. The value of h – according to NIST’s new measurement – is 6.62606983x10-34 kg∙m2/s, with an uncertainty of plus or minus 22 in the last two digits. 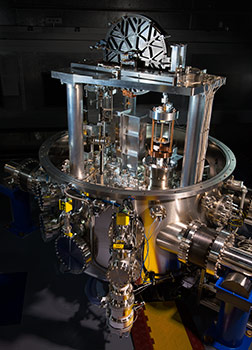 The NIST-4 watt balance has measured Planck’s constant to within 34 parts per billion, demonstrating that the high-tech scale is accurate enough to assist with 2018’s planned redefinition of the kilogram.

Planck's constant's accuracy can indeed be increased. As detailed by this website, there are five main different ways of calculating Planck's constant, each with varying levels of uncertainty.

Approximately every four years, a organization called CODATA (more specifically, its Task Group on Fundamental Constants) publishes the most up-to-date values for fundamental constants, including Planck's constant. The most recent update came in 2014 (though it was technically published in the middle of 2015). The value for Planck's constant in this update was $6.62607004 \times 10^{−34}\,\mathrm{J}\cdot \mathrm{s}$, with a standard uncertainty of $0.000000081 \times 10^{−34}\,\mathrm{J}\cdot \mathrm{s}$.

This paper as well as the websites linked have more information.

From 2018 (most probable date at the moment), with the redefinition of the International System of Units (SI), the Planck constant will have an exact, permanent, value, with zero associated uncertainty, assigned according to the latest (2018) adjustment of the fundamental constants made by the CODATA group (see related answer here).

No. In sensible units, Planck's constant reduced is exactly 1. Its accuracy cannot be improved in any meaningful sense.

In non-sensible units such as humans sometimes use around the house, Planck's constant is a mishmash of mass, length and time units. Since the mass unit (the kilogram) is not defined physically, it must be measured, and that measurement can be improved. Indeed, it must be improved in order to change it to a physically defined version, which should happen within a few years.