Why can I never see any stars in the night sky?

I have always lived near a large city. There is a stark contrast between the picture linked below for example, and what I see with the naked eye.

Sometimes I can see a few stars here and there, but usually they can be counted on my fingers. I'm looking up at the night sky right now, and there isn't a single visible star!

Question: What creates this large gap in what I can see?

Here's the photograph I was talking about: http://apod.nasa.gov/apod/ap120123.html

This is a simple and clear issue, with a unique answer. I see other replies mentioning weather conditions, dark adaptation and so on. That's just so much hand waving, given that the first thing you said was "I've always lived in somewhat large cities".

The core problem here, by a very wide margin, is light pollution if you live in a large city. This is the one factor, above everything else, that affects your ability to see the stars.

Here's a somewhat better (but not perfect) comparison of a dark sky versus light polluted sky (your picture was taken with a very long exposure that doesn't look very realistic): 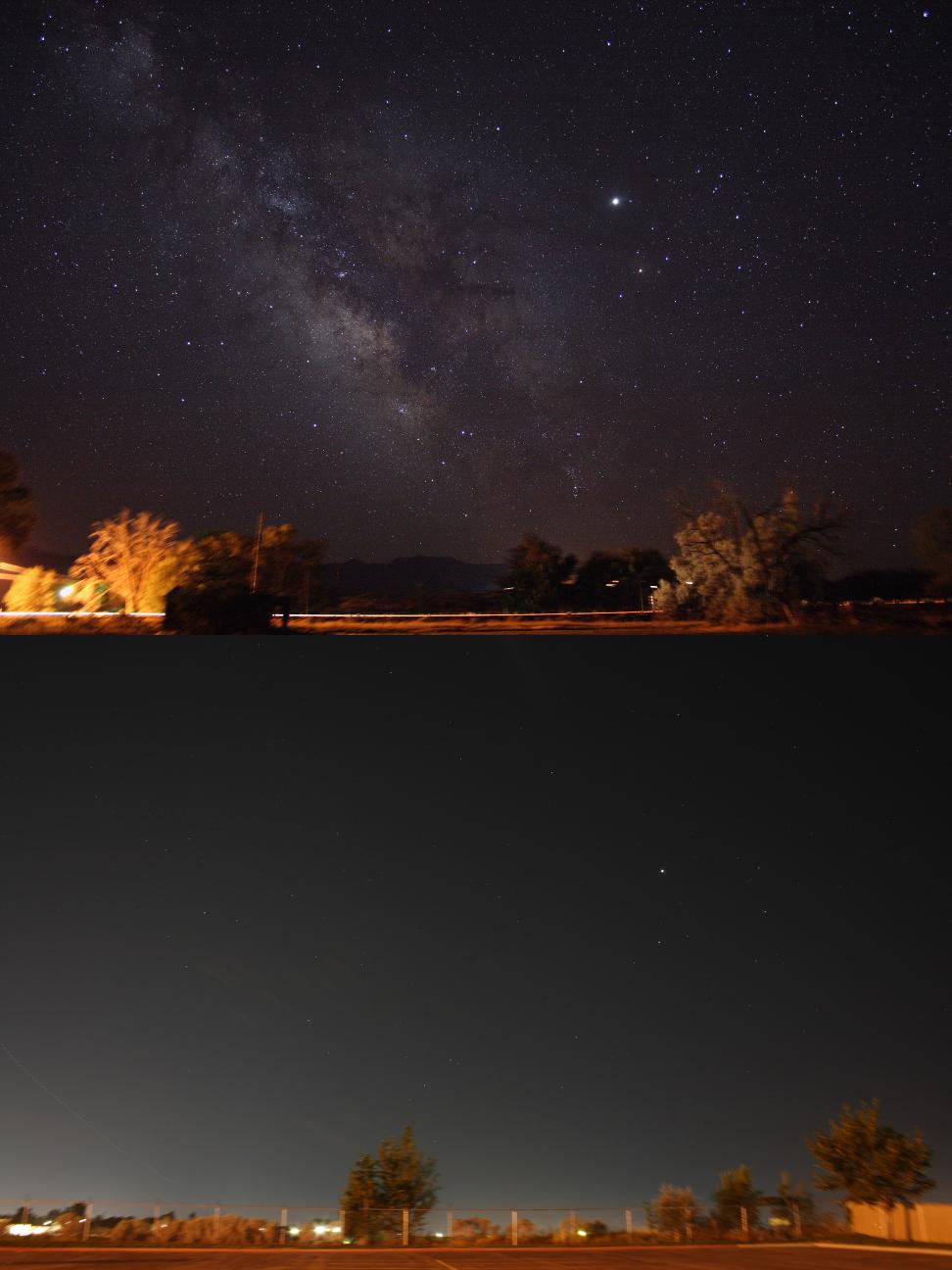 The dome of light above the city is very visible if imaged from afar: 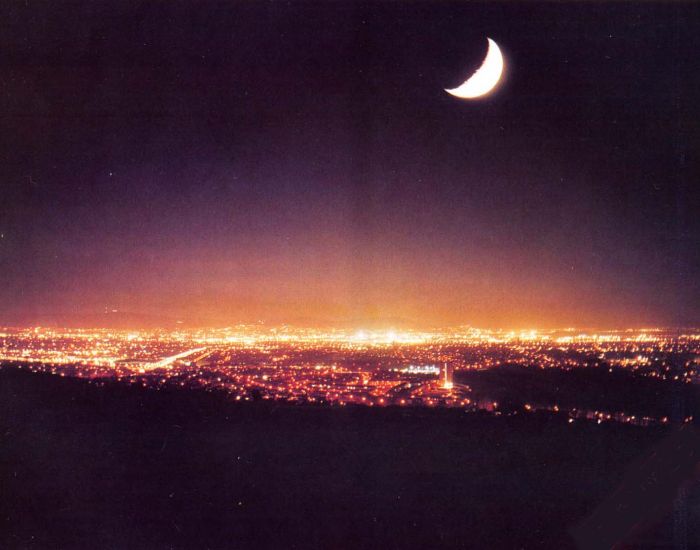 Long exposure pictures in cities will reveal the orange skyglow, which is the main reason why you can't see the stars - it's like noise masking off the faint light from the distant objects: 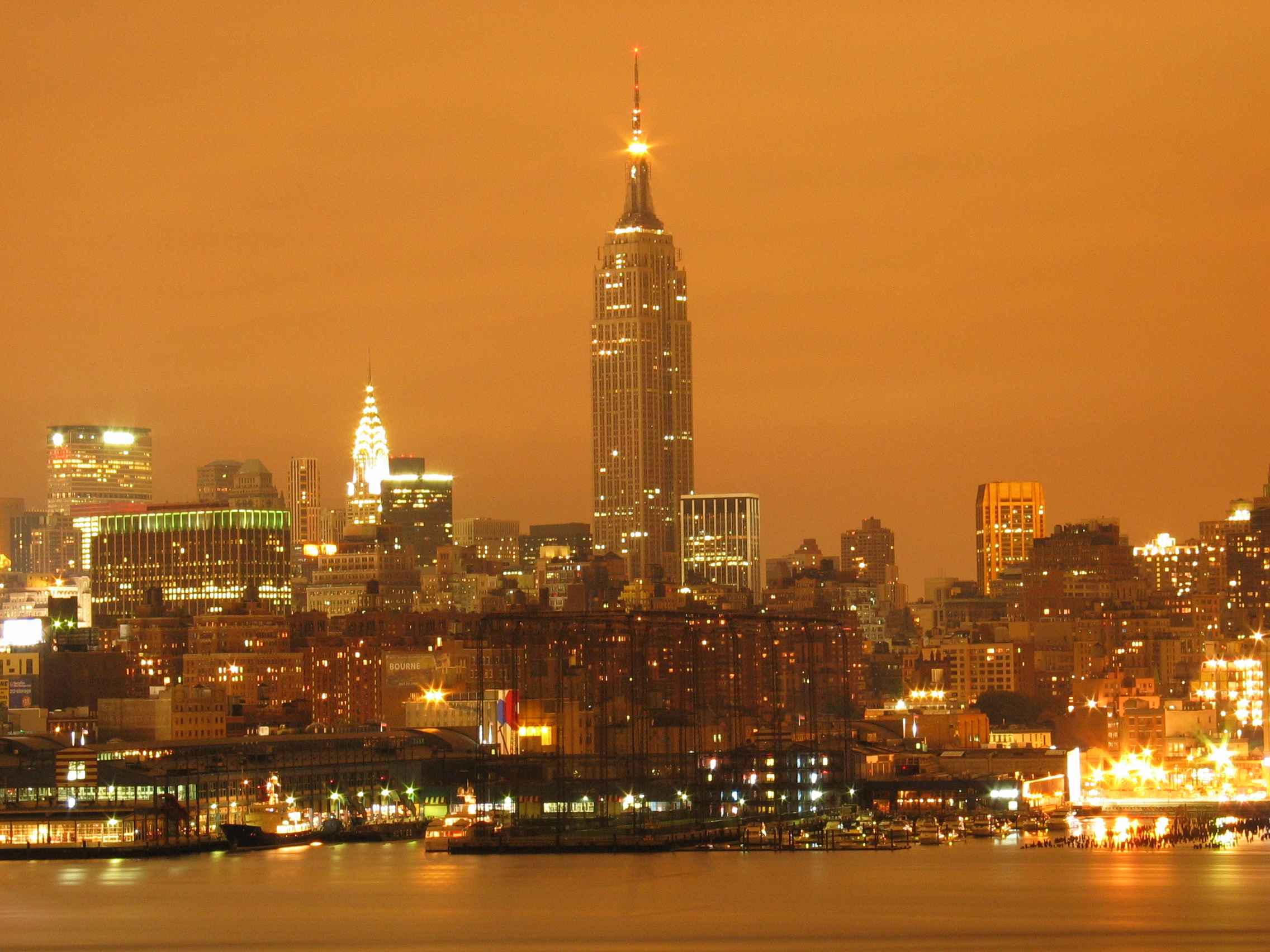 Light pollution affects primarily the observations of faint objects, such as nebulae or distant galaxies. Bright objects such as the Moon, the big planets, or some of the bright stars, are not affected by light pollution.

Using a telescope with a large aperture alleviates the effects of light pollution to some extent, but it cannot work miracles. A dark sky is always better.

Usually a 1 hour drive away from the city will bring you in a place with dark sky, free of light pollution - but it depends on several factors. In such a place you should be able to see the Milky Way with your naked eye. The Andromeda galaxy also is visible with the naked eye if the sky is dark enough.

A number of factors:

I live in a 5 million people conurbation in Germany and even there I can see stars. From my balcony. Heck, the light pollution isn't even bad enough to /not/ see the ring nebula in an 8" reflector. So unless you live right under a neon sign, you should be able to see some stars.

In typical street illumination and under a clear sky you will still see around 5 - 10 of the brightest stars and planets (e.g. Rigel, Betelgeuse, Venus, Jupiter). If you manage to find a "dark" spot - like a back alley - you might see much more. On my balcony (again: 5 million people conurbation) I can see many constellations - also the darker ones. You could use Google Sky Map or similar software to find some stars.

What you will never see in a city, though, is the milky way as on the picture you quoted because it is not bright enough.

What color is your sky during the day? If it is deep blue, then you should see lots of stars at night even in a large city. If your daytime sky is very light blue though, or worse, pale grey, white, brown, or orange, then you have a problem. City light polution will light up this haze at night and make it impossible to see any stars. Haze isn't due to weather alone, it can come from air polution, pollen, or dust. If these conditions are common or persistent in your area, then seeing stars might take patience. Try a night after a day with an unusually blue sky. Try just after a rain storm has cleaned the air. Try when the wind comes from a different direction, maybe bringing clearer air.

The picture you showed is a long exposure, which shows many more stars than are visible to the naked eye anywhere on Earth. I currently live on a farm in rural Canada where I can see several thousand stars on a clear night, but not anything like the photograph. I used to live in downtown Toronto, population 6 million, but even there I could see perhaps a hundred stars any clear night. Part of the problem with people who say they can't see any stars is that they don't spend enough time in the dark: it takes up to 20 minutes for the human eye to become fully dark adapted after exiting a brightly lit area.

-1
What are the conditions for a clean night sky? With plenty stars?

4
How many stars did people think there were in the 11th century (or thereabouts)?
10
Of the 9096 visible stars -- 90% are how close?
3
What is this big, white, dense, circular collection of stars in this picture taken from a Telescope? (See the image)
3
Resource: Star map which show current actual positions versus current observable positions?
5
Naked eye cosmology?
2
Calculating apparent density of stars in sky, given an area and distance away from my viewpoint
1
Is the dark night sky paradox (Olber's paradox) really a paradox if we count with simple astronomical observations?