Why would a moving infinite region of magnetic field exert an electric force?

I'm confused about the Lorentz force in relation to the frame of reference. There are many questions about that here, but I still don't get it. I've tried to break it down to the most basic example.

Lets say we have a single charge moving into the screen with velocity $v$ between two infinitely long magnet bars. The Lorentz force law tells us that the charge will experience a force to the side. 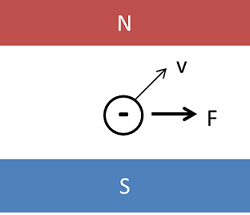 So far so good. But now I change the frame of reference into one where the magnets move at speed $v$ out of the screen and the charged particle remains stationary. The relative motion is the same, so I expect the same force.

Since the charged particle isn't moving, there is no Lorentz force.

You can't get away from special relativity, which is what "unifies" electric and magnetic phenomena. The electromagnetic field really is a single field (actually a tensor, but don't worry about that), and its components mix together in the Lorentz transform in a similar way to how the x,y,z components of a usual vector field mix together in a rotation.

An object in motion appears length contracted to observers: $L' = L_0/\gamma$, where $L_0$ is the length of the object its rest frame and $\gamma$ is the Lorentz factor associated with the velocity of the object:

Consequently, if the object is charged, the charge density increases when in motion: 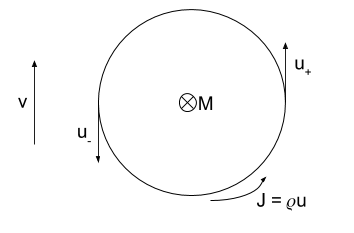 Then in the moving frame, the speed $u$ is not uniform around the loop, and charge densities at the points of the loop flowing with and against the direction of motion are different: $$u_\pm = \frac{u \pm v}{1 \pm uv/c^2} $$

Lorentz Transform of E and B fields

If you begin with fields $\vec E$, $\vec B$, and want the fields in an inertial frame moving at relative speed $\vec v$, the new fields are:

Not the answer you're looking for? Browse other questions tagged electromagnetism forces magnetic-fields electromagnetic-induction or ask your own question.