Why is Jupiter so sharply defined?

In photographs of Jupiter, the limb seems extremely definite. Being a gas giant, my naive self thinks that the atmosphere should have a more gradual cut off, creating a hazy effect similar to that on Titan. I am aware of Jupiter's immense size, so each pixel in the linked photograph is likely tens or hundreds of kilometers. Even so, wouldn't there be some small smudge? Does perhaps Jupiter's terrific gravity have any effect on the apparent edge of its atmosphere?

Your first inclination is correct. It's a matter of scale. Jupiter is HUGE. I'll resist quoting Douglas Adams here, but the human brain just isn't equipped to deal with those sort of dimensions. Add to that the distance from which that photograph was taken. You are actually beyond the orbit of the moon Io in that picture, so scale will be even more set off than usual.

In looking at the specific photograph you posted, there may have been some post processing effects as well in terms of colour and clarity (due to some pixelation effects on the limb), although in this case I may have to claim some ignorance. However, there have been experiments done where the Galileo probe actually watched a star as it passed the limb of Jupiter, and measured the atmospheric extent. I can't find that exact experiment, but here is a UV shot that again appears pretty defined, until you realize the distances you are dealing with. 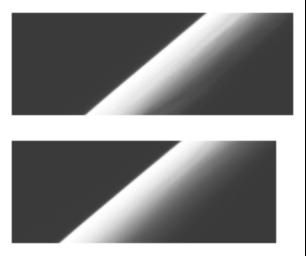 The images, which show the limb between 60.6 degrees and 62.2 degrees North latitude (planetographic) and near 295 degrees West longitude, were obtained on December 20, 1996 Universal Time. The spacecraft was about 1,561,000 km (21.8 Jovian radii) from the limb of Jupiter and the resolution is about 16 kilometers per picture element.

This picture does show some apparent haze, but I only have a few details on it (i.e. New Horizon's image courtesy NASA as posted on the Boston Globe). I have no idea the wavelength or any other parameters. 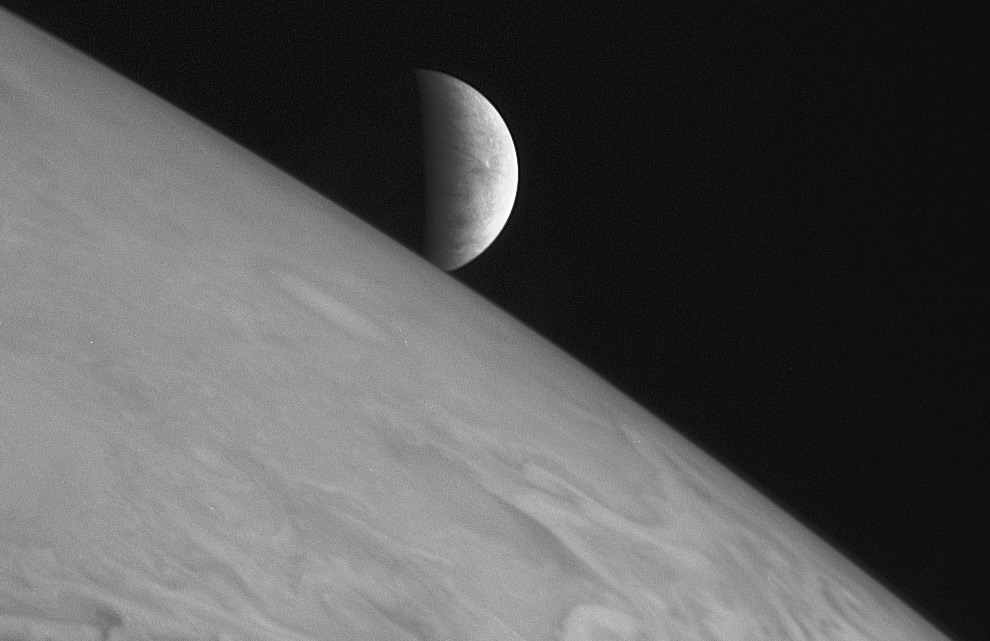 So again, our scale of perspective is thrown off because of the huge size of the planet.

Some graphs that didn't make the cut for this paper show the density of a self-gravitating sphere in hydrostatic equilibrium as a function of radius. A defining feature of the equations that determine the structure of a fluid sphere like Jupiter (or stars, white dwarfs, neutron stars, etc.) is that the pressure and density hold relatively steady for a while and then exhibit this crash to zero.

With the caveat that you have to be prepared to evaluate words like "thick," "thin," "fast," and "crash" on not-human scales, as Larian mentioned, the crash to zero pressure and density is quite fast in the sense that it happens within a very thin, uppermost layer of the sphere.

EDIT: Aha! But one of them made it into this paper. See figure 8, bold line.

Irrespective of issues like image processing etc, you would expect the limb of Jupiter to look sharp because of its larger radius, high gravity and low temperature.

We can make the very rough approximation of an isothermal atmosphere, in which the exponential scale height of the atmosphere would be $$ h \sim \frac{k_B T}{\mu g}\, ,$$ where $g$ is the gravitational field, $\mu$ is the mean mass of a particle and $T$ is the temperature (in Kelvin).

i.e. The pressure/density of the atmosphere falls exponentially, with an e-folding height given by the above expression.

Jupiter's atmosphere is roughly half the temperature of Earth's, it has 11 times the radius and 3 times the "surface" gravity. However $\mu$ is about ten times smaller (hydrogen vs nitrogen/oxygen). Overall that means $h/R$ for Jupiter is of order 5-10 times smaller than for Earth and so it will appear "sharper" than the limb of the Earth in equivalent pictures.

Thus if your image of the whole planet is about 2000 pixels across, the atmospheric scale height is less than a pixel.

Not the answer you're looking for? Browse other questions tagged newtonian-gravity atmospheric-science estimation jupiter or ask your own question.

3
Jupiter: Zonal Jets in opposite directions
12
What would be the effects if Jupiter was to blow up?
26
Why do the storms of Jupiter have long life unlike that of Earth?
0
How we are able to see Jupiter?
5
Shoemaker-Levy 9 impact on Jupiter
2
Jupiter: Why is there no atmosphere at distance?
44
What would happen if Jupiter collided with the Sun?
3
Why is Jupiter gaseous rather than solid or liquid?
1
Jupiter & Saturn